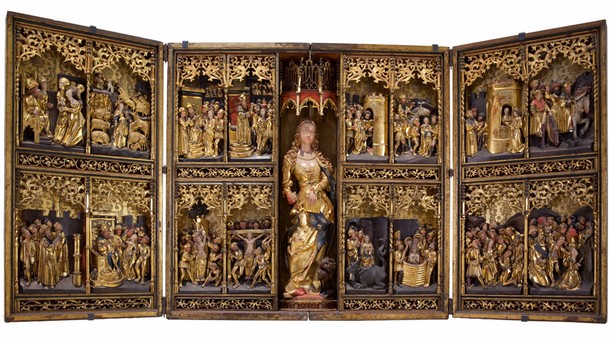 This imposing painted oak altarpiece tells the story of Saint Margaret of Antioch, who was martyred for refusing to renounce Christianity. It was probably made in Hamburg or Lüneburg in North Germany, about 1520, probably for the church of St John in Lüneburg. This church contained 40 altarpieces prior to the Protestant Reformation (1517–1648), when many churches and cathedrals were stripped of their contents.

It was common practice for many craftsmen to work together on such large altarpieces. The style of the elongated heads in the two lower right panels, so different from the others, suggests they were made by a different artist.

Thisgilded wooden altarpiece shows 16 scenes from the legend of St Margaret of Antioch. It dates from around 1520 and consists of a central body and two wings. The central body is marginally taller than it is wide - just over two metres - and the two wings are a little more than two metres, or 7 feet, high and almost a metre, or 3 feet, wide.

Dominating the centre is a large sculpture of the youthful St Margaret. Her fair hair falls in thick curls to her shoulders and she has a pale complexion with pink cheeks . In her right hand, she carries the remains of a palm frond, a symbol of martyrdom. At her feet is a black dog-sized dragon, its jaws gaping, its tail coiling up her right leg. Margaret was believed to have burst from the belly of a dragon that had swallowed her. As a result St Margaret became associated with childbirth and was invoked by pregnant women for protection.

On either side of St Margaret, carved scenes from her life read from left to right. In the top left panel Margaret's nurse gives the infant saint to her father Theodosius, a pagan priest. Immediately below is a scene of Theodosius surrounded by citizens sacrificing a sheep to a pagan idol - now lost - on a column. Moving to the left-hand wing, in the lower right panel, we find Margaret brought before Olybrius, the Western Roman emperor who has been bewitched by her beauty. Margaret points to heaven as she asserts her Christian faith and refuses his offer of marriage. In the two scenes on the left of the central corpus St Margaret is first sentenced by Olybrius, then led away by soldiers. Her torments begin. In the first of the lower scenes she's hung half naked by her hands and scourged with rakes, although these are now missing. In the final compartment on the left-hand side she's bound to a crossbeam and beaten by two soldiers. On the right of the central corpus she's held in a castellated tower, and in the next scene, the devil in the form of a bearded man tempts her to renounce her faith. The first of the lower pair of compartments shows St Margaret emerging serenely from the back of a black dragon who has tried to devour her. In the next scene she stands naked, hands folded in prayer, waist-deep in a vessel of boiling pitch while two men ladle more pitch onto her head. In the top of the right-hand wing St Margaret has been returned to the tower. She looks out of the arched window to a winged angel.

In the lower half of the right wing, the left-hand compartment shows Margaret's executioner Malchus on his knees in prayer before her. In the final scene, on the right, Margaret is on her knees, her fair hair swept up to bare her neck, her face lifted towards heaven.

Supported by The BAND Trust.

The life of Saint Margaret of Antioch

Learn more in this audio about Saint Margaret of Antioch, who was said to have been a 15-year-old virgin martyred in about the 4th century for her refusal to renounce Christianity and marry a pagan ruler.
Download: mp3 | ogg View transcript
Repeated from main page:
Male narrator:
In the centre of this altarpiece, Saint Margaret stands beside a small dragon. Margaret was a 15-year-old virgin martyred for her refusal to renounce Christianity and marry a pagan ruler. A saint is a holy man or woman who has lived an exemplary life or has been martyred for their beliefs. Roman Catholics believe that saints can intercede with God on behalf of the living and help to prevent illnesses, plagues or sudden death.
Although most people would have known about Margaret's life through preaching and images like the ones on this altarpiece, her life was also recorded in many written accounts. The best known comes from a 13th-century book of saints' lives called The Golden Legend. It tells the dramatic tale of the virginal saint who survived numerous ordeals for her devotion to Christianity.

Female voice:
'A monstrous dragon suddenly appeared before her and sprang to devour her, but she made the sign of the cross and it disappeared. According to another account, the dragon got its jaws over Margaret's head and its tongue around her feet and swallowed her, and it was while it was attempting to digest her that she armed herself with the sign of the cross, and this proved too much for the dragon, who burst apart, and the virgin emerging unhurt.'

Male narrator:
The legend of Margaret's escape from the dragon became popular throughout Europe. Pregnant women prayed to her to help both them and their unborn infants escape the dangers of childbirth. The cult of saints and martyrs, like Margaret's, led to a proliferation of images that were used in worship. During the Reformation, from the 1520s onwards, this cult came under widespread attack in Northern Europe and many images were destroyed. In 1969, the Catholic Church stopped recognising her as a saint.