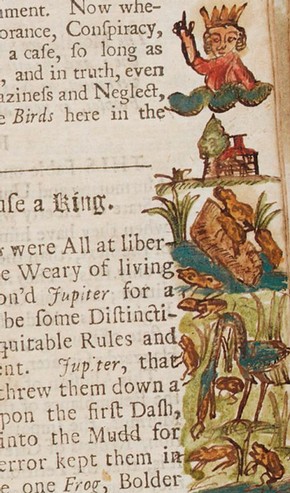 ‘The Frogs Chuse a King’ (The Frogs Desiring a King), hand-drawn illustrations by Jeremiah Cliff, in 'Fables of Aesop and other eminent mythologists' by Roger L’Estrange, 1708. Printed for R. Sare, London. Pressmark NAL Safe 6.A.10

This is an early 18th-century English edition of Aesop's Fables, a collection of stories that has been a 'best-seller', among both adults and children, for more than two thousand years. What makes this particular copy special is the complete series of illustrations painted on the margins throughout by its first owner, Jeremiah Cliff, within a few years of the publication date.

Jeremiah Cliff has been identified as an apothecary living in the town of Tenterden, in Kent. Apothecaries performed the functions of modern-day pharmacists, but also traded in other goods including artists' pigments, which might suggest why Cliff took up painting as a hobby. Though amateur in style, his images are full of detail and humour, as well as observations of daily life. He has a feel for page design, and the placement of his figures within the tiny spaces available is careful and often witty. He also uses compositional motifs found in published fable illustrations, and his marginal notes cross-refer to another edition of the Fables: clearly he was a cultivated person, perhaps with a large library of his own.

But there is more to it. On several pages, Cliff has depicted a priest figure, labelled with the name of 'Dr Sacheverell'. Henry Sacheverell was a Tory cleric put on trial in London in 1710 for publishing inflammatory sermons preached against the Whig government and especially its toleration of Dissenters (religious Nonconformists). The trial was a widely-reported sensation. Jeremiah Cliff's locality was strongly associated with Dissent, and his scathingly satirical depictions and captions suggest his own viewpoint. From this we can also reconstruct the fact that Jeremiah Cliff owned and illustrated this book within a year or two of its publication.

This book invites comparison not only with other fable books and images, but with the long traditions of manuscript illumination and watercolour painting, as well as printed street literature such as illustrated broadside ballads, and - as these pages clearly show - with the later development of comics and the graphic narrative arts. In addition, it offers an unusual example of an early-modern reader's intense engagement with one of his books.