The Actor and the Maker: Ellen Terry and Alice Comyns-Carr

The Actor and the Maker: Ellen Terry and Alice Comyns-Carr 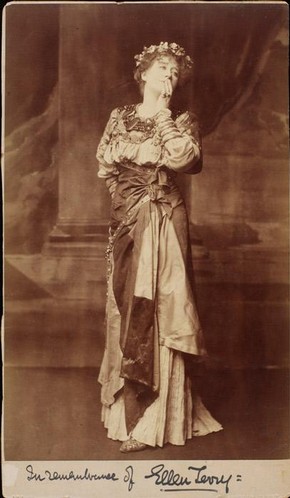 The greatest English actress of the late 19th and early 20th century, Ellen Terry, exercised a great deal of control over what she wore on stage. She was leading lady to the legendary Actor-manager Henry Irving, at the Lyceum Theatre from 1878 to 1902 and during this period she devised many of her own costumes. Letters and memoirs chart her dealings with her advisors and makers and reveal the conflicts that can arise between the needs of the designer and the needs of the actor.

Terry had a highly developed visual sense. Born into a theatrical family she became a child star, at the age of sixteen she married the painter George F Watts but later left him for the brilliant young architect and designer, Edward Godwin. Godwin showed her an alternative to the prevailing realistic style when he designed her costume for 'Titania' in 1863:

'He showed me how to damp it and “wring” it while it was wet, tying up the material as the Orientals do in their “tie and dry” process, so that when it was dry and untied, it was all crinkled and clinging. This was the first lovely dress that I ever wore, and I learned a great deal from it.'
(Ellen Terry, 'The Story of My Life')

While always wanting to look her best, she made sure that her costumes would fit into the whole stage picture and express the character. As Ophelia in Hamlet in 1878 she recorded the decisions behind each costume:

‘First scene: pinkish ‘It’s all rose-coloured with her. Her father and brother love her. The prince loves her - and so she wears pink... Nunnery scene: a pale, gold, amber dress, the most beautiful colour. The material is a church brocade. It will tone down the colour of my hair. Last scene: a transparent black dress.’ However, Irving insisted that Hamlet should be the only black figure in the play, and the completed black dress was jettisoned for one in white. ‘So instead of the crepe de Chine and miniver... I had for the white dress Bolton sheeting and rabbit, and I believe it looked better.’ 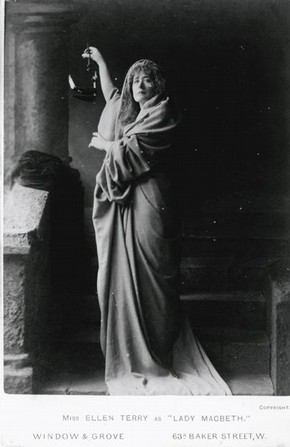 Fabrics were not chosen because they were expensive but because they were appropriate: ‘At the Lyceum wanton extravagance was unknown’ and Ellen’s first dress for the character 'Ophelia' was made of a material that cost less than two shillings (ten pence) a yard.

Sometimes a costume suggested the characterisation. Rehearsing as 'Portia' in 'The Merchant of Venice' in 1875, she felt the clothes designed by Godwin suggested slow delivery and movement, ‘and the setting of the play developed the Italian feeling in it, and let the English Elizabethan side take care of itself.’

Originally, Terry's costumes were made by Patience Harris, but in 1887shemet costume advisor Alice Comyns-Carr whose ideas were diametrically opposed to Patience’s pretentious, elaborate creations. Alice introduced Ellen to the dressmaker Mrs Nettleship, who created occasional clothes for the actress’s personal wardrobe as well stage costumes.

When Ellen starred alongside Henry Irving in Macbeth in 1888, there was not a wide choice of fabrics available in England, and Alice could not find the colours she wanted to achieve her effects. She wanted one dress to ‘look as much like soft chain armour as I could, and yet have something that would give the appearance of the scales of a serpent. ’(Mrs. J. Comyns Carr’s 'Reminiscences'. London: Hutchinson, 1926). Mrs Nettleship found a twist of soft green silk and blue tinsel in Bohemia and this was crocheted to achieve the chain mail effect. 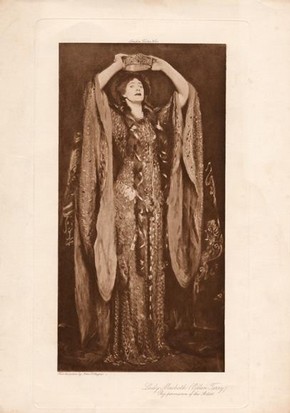 The dress hung beautifully but:

‘we did not think that it was brilliant enough, so it was sewn all over with real green beetle wings, and a narrow border in Celtic designs, worked out in rubies and diamonds, hemmed all the edges. To this was added a cloak of shot velvet in heather tones, upon which great griffins were embroidered in flame-coloured tinsel. The wimple, or veil, was held in place by a circlet of rubines, and two long plaits twisted with gold hung to her knees.’

Mrs Nettleship had an infallible instinct for what would work on stage. By clouding over a colour that was too bright or deepening a rich one with a fold of chiffon, Julia Neilson, Ellen Terry's actress sister-in-law said: ‘one could always depend on her to get the last ounce of dramatic value out of the materials she handled.’ ('This For Remembrance', 1940). Julia is quoted in her memoirs as remembering the ‘frightful’ weight of one of Mrs Nettleship’s dresses in ‘Henry of Navarre’; its enormous steel panniers and encrustation with jewels rendered it ‘almost unbearable’.

The V&A Theatre Collections holds surviving letters from Ellen Terry to Mrs Nettleship which show the actress’s input into her own costumes and her appreciation of a costume as part of the whole design, as well as revealing a thorough, practical knowledge of theatre. Writing about ‘King Lear’ at the Lyceum in 1892, she advised:

‘Don’t let there be any short wimples for any of the ladies in this play - there should be no wimples at all but some drapery from the head coming down and enveloping them in their second dresses.’

She also knew what suited her and was particular about details:

‘...remember that a waist band sloping downwards does not do for me at all. Never again please. I cut it off, and wore the velvet band straight round and the front soft stuff falling over and it makes me look half the size.’

Sometimes these requests came at very short notice, for example, one request is for a costume change in a performance of 'The Corsican Brothers' showing that same day:

‘Would you have a little dress run up for tonight’s wear for Miss Gibson in The Corsican’s?’ Ellen wrote. ‘…the dress which is to be copied... is of dark shot silk and is much too funeral and too dark for the little lady who wears it. This would suit the situation much better. This or something like it, and only it, must be light in colour - a white satin dress is already on the stage, so that wont do - and’ she adds practically ‘a transparent dress won’t travel for America - so a pale glacé silk of some kind will be best trimmed with tarlatan... not net - festooned at the breast and slightly round the bottom of skirt...’.

This kind of request could only have been fulfilled if the maker and client were in total accord, and demonstrates the close working relationship they shared. 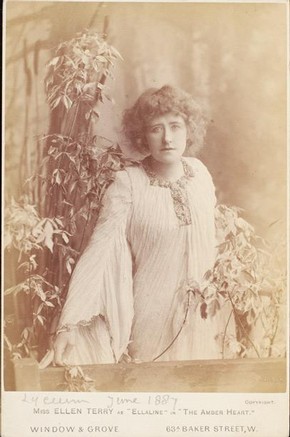 Ellen Terry as 'Ellaline' in ‘The Amber Heart’, Window and Grove, 1887 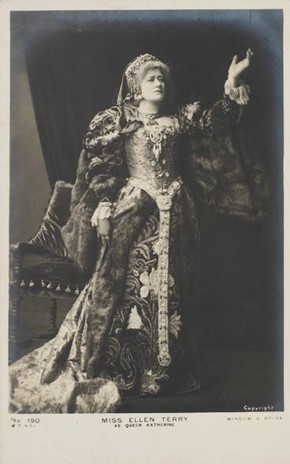 Originally Ellen Terry's costumes were made by Patience Harris, but in 1887 Ellen met Alice Comyns-Carr whose ideas were diametrically opposed to Patience’s pretentious, elaborate costumes. The breaking point came when Ellen admired Alice’s ‘crinkled’ muslin dress and wanted a similar effect for this costume as 'Ellaline' in ‘The Amber Heart’. The effect was achieved by twisting the fabric into a ball and boiling it in a potato steamer; Patience refused to have anything to do with the potato steamer and Alice took over.

‘Henry VII’I brought a clash of opinion between designer Alice Comyns-Carr and actress Ellen Terry. Alice wanted historical accuracy, while Ellen wanted to sacrifice accuracy for comfort. Alice consulted the great French actress, Sarah Bernhardt - an acknowledged mistress of stage costume, and Ellen was very put out when Bernhardt agreed with Alice, saying that ‘What is correct can always be becoming.’ Ellen had a fine historical sense, but was less daring than Bernhardt; she ‘would jib at fashions that she fancied might interfere with the freedom of her movements while acting, or might seem absurd to the audience.’
(Mrs. J. Comyns Carr’s 'Reminiscences'. London: Hutchinson, 1926).

There was a heated discussion over Queen Katherine’s trial scene costume - a gown of rich metal cloth with a very heavy embroidered front panel; Ellen Terry complained that it was ‘just like a tea tray on my stomach’ and far too heavy, but Sarah Bernhardt declared: ‘Ah, but it is just what it should be. The Tudor touch. So you must not think of your stomach...’.