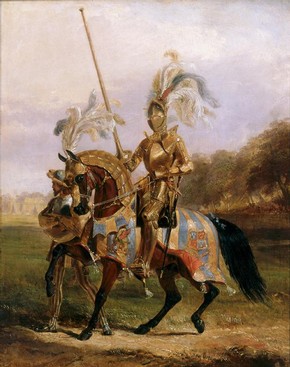 Lord Eglinton dressed as the Lord of the Tournament, oil painting on wood by Edward Henry Corbould, Britain, about 1840, Museum no. P.5-1981 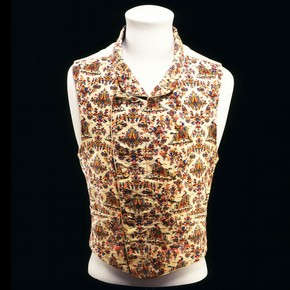 Wool waistcoat made from cloth sold to commemorate the Eglinton Tournament, Britain, about 1839. T.129-1969

By the 1830s, tales of romance and chivalry inspired an interest in the costume and events of the Middle Ages.

This painting shows Archibald William Montgomerie, 13th Earl of Eglinton and Winton, dressed in gold armour at the tournament which he hosted in 1839. At the famous Eglinton Tournament, held at Eglinton Castle,  Ayreshire, Scotland, the Earl and his guests dressed themselves in medieval-style costumes and took part in processions and competitions.

The tournament was open to the public and attracted tens of thousands of spectators. Participants had spent the previous year in training, both in private and in public, building up huge public interest in the event. A variety of commemorative souvenirs was produced, such as  jugs or textiles.

You can learn more about the Tournament in the audio below. 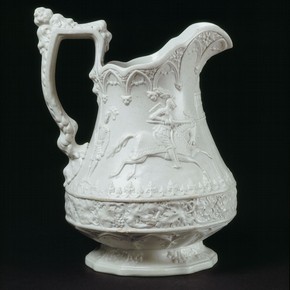 NARRATOR: As a boy, the man on a horse in this painting loved to read stories of King Arthur and his Knights of the Round Table. As a man, Lord Archibald Eglinton has dressed as a knight to joust at his very own tournament. On the 27th of August 1839 at Eglinton Castle in the west of Scotland, thousands gathered to watch him recreate the age of chivalry. The painting shows Lord Eglinton's hopes and dreams for the occasion. The reality was somewhat different, as a Glasgow newspaper reported:

REPORTER 1: Two knights ran towards each other, at a very moderate pace indeed and attempted to poke each other with their poles, mistakenly called lances, in a manner so utterly harmless that a child need scarcely have dreaded the encounter. Not a single knight was unseated, or even made to reel in the saddle.

NARRATOR: In the painting you can see one of the jousting poles and the tents where the knights changed into their armour, and just a hint of rain in the distance. On the first day of the tournament, the clouds were much darker. At noon the skies opened and the spectators in their fine costumes found themselves soaked to the skin and not even able to see very much. The reporter continues:

REPORTER 1: I once caught a glimpse of a horse's tail, and once a hurried view of the end of a lance. Another time I just distinguished, for an instant, the nose of a combatant, and once afterwards obtained a full view of the Marquess of Waterford, who seemed really to enjoy the fun, and to like it all the better for the mud below and the moisture above…