'The Laughing Child' & 'The Crying Child', after François Roubiliac, about 1750 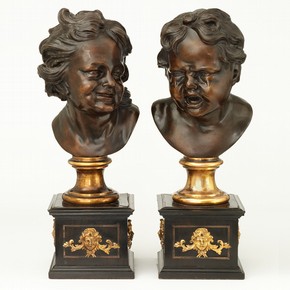 This pair of bronze heads of the Laughing and a Crying Child is almost certainly British, and probably dates from about 1750. The most likely author of the heads is Louis François Roubiliac (1702–62), a French sculptor who came to Britain in 1730 and was considered to be the leading sculptor in this country in the first half of the 18th century. They are on wood socles with gilt metal mounts; the socles, which could be French, may have been added at a later date.

The head of the Laughing Child is a very good bronze cast, with a rich gold-brown patina. Other versions of the Laughing Child are known in bronze, marble, plaster, Parian ware (a fine-grained porcelain that imitates marble), and there is also one in Chelsea porcelain, which is now in the Ashmolean Museum, Oxford. A version of the Laughing Child, probably of plaster, is also depicted in John Hamilton Mortimer's 'Self-Portrait with Joseph Wilton' of about 1765. All the bronze versions show slight differences in detail and in size, and recall the work of Bernini, although they are unlikely to be Italian. The Crying Child is rarer, and the known bronze versions all differ significantly from one another.

The authorship and date of all the known versions of the heads are uncertain, although certain references point to an 18th century, and to Roubiliac's probable authorship. Their style recalls both Netherlandish and Italian sculpture of the 17th century, while the lightness of expression and their scale (about half life-size) are also reminiscent of French 18th-century sculpture, but all the surviving versions have a British provenance, and it seems most likely the original models were made in Britain, probably by Roubiliac.

Various plaster items in Roubiliac's sale catalogue of 1762 could refer to models and moulds of the heads, including one 'crying boy', moulds for a pair of 'naked busts', and casts of these, as well as the moulds of 'a young child', 'a laughing boy', and 'a boy's head'. The Laughing Child was evidently more popular than the Crying Child, although both became self-sufficient sculptures in their own right.