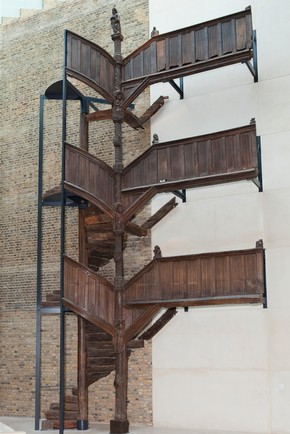 This oak staircase, dating from 1522–30, came from No. 17 Grand'Rue, the main street of the wealthy town of Morlaix, Brittany, in France. The timber-framed house was a type known as a maison à pondalez. Built from about 1450 to 1630, these houses took their name from the distinctive staircases with long landings or ponts d'aller (literally 'bridges for going').

The hall was the largest room of the house, where visitors were received and business conducted. In the 16th century it was usually furnished with a trestle table and bench-chests, as well as with equipment for cooking and dining.

The staircase and its landings dominated the hall. They rose to the building's full four-storey height, with the top landing underneath the roof. Facing the staircase was a monumental stone fireplace, used for heating and cooking but also the main source of light. Opposite the fireplace and set into a niche under the lowest landing of the stair, there was sometimes a stone wall fountain supplying water to the house. 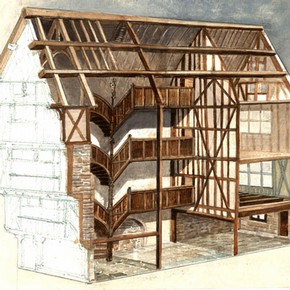 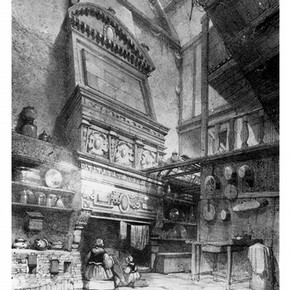 Lithograph of a view of the monumental fireplace in the hall of a house at Treguier, Brittany, by E. Cicéri after A. Guesdon, 1833. Supplied by Musée de Morlaix. 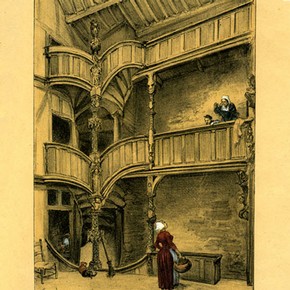 Watercolour showing an additional floor inserted into 33 rue du Mur, Morlaix. The foot of the staircase descends below the floor level. Supplied by Musée de Morlaix.

The internal arrangements of many maisons à pondalez have been altered since they were built. A line of damage along the panels of the first-floor landing of this staircase suggests that a wooden floor was built across the hall of No. 17 to create an additional room. During the 19th century, the roofs were also sometimes adapted and a roof lantern or dormer window inserted. This must have made the staircases – usually very dark – much lighter, and gave rise to another name for this house type, the maison à lanterne.

In 1900 the staircase from No. 17 was sold to Mr J.H. Fitzhenry, an English collector, probably because it was unsafe, and he gave the staircase to the V&A in 1909. About ten maisons à pondalez survive in Morlaix, one of which may be visited: the Maison de la duchesse Anne, 33 rue du Mur, Morlaix.

The following books are available in the National Art Library at the V&A:

The website of the Maison de la duchesse Anne, Morlaix, has information in English as well as French: www.mda-morlaix.com

The V&A would like to thank Le Musée de Morlaix for permission to use images.