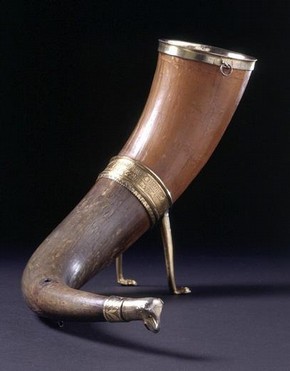 Only a few silver-mounted horns survive. They were intended for ceremonial drinking, or display.

This one is inscribed, 'I kynge knowde (Cnut) gave Wyllyam Pecote (Pusey, mistranscribed) thys horne to holde by thy land'.

By tradition, the manor of Pusey was given to William by King Cnut (died 1035) as a reward for a warning of an impending Danish attack. The horn was delivered with the letter of tenure, and remained in the Pusey family until it was presented to the Museum in 1938. `Cornage', or transfer of land by service of a horn, was customary in Anglo-Saxon England.