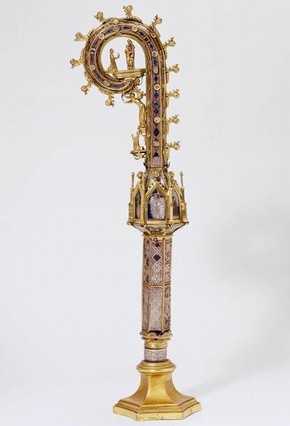 In 1862 the Museum bought a crozier, or staff carried by a bishop, from the great collection of Prince Soltikoff, who had gathered together reliquaries, crosses, croziers, ewers - every kind of object that had been looted or sold from the treasures of Europe during the political and military upheavals of the late 18th and early 19th century.

This crozier came from the famous and ancient island monastery of Reichenau in the middle of Lake Constance, which borders on Germany and Switzerland. It is known from the inscription engraved in Lombardic capitals on the silver ring at the base, which says: 'In the year of our Lord 1351 this staff was made for Abbot Master Eberhard of Brandis, the worthy superior, through Master Nicholas of Gutenberg treasurer of this monastery (or chapter) of Reichenau.' (A.D.M. CCC.L.I. FCVS. E. BACLS. ISTE + DNO. EB. D'. BRADIS, ABBE. HON. PSIDENTE. DNO. NICOL. D. GUTEBG. THES'. IBIDE. AVGA. AIOR. P.C'.).

Eberhard de Brandis was abbot in 1353 when the great Holy Roman Emperor Charles IV visited the Abbey, and it is not too fanciful to imagine that he went to meet him with his symbol of office, this new crozier, in his hand. It was also he who, through careless and spendthrift rule (1343-79), was largely responsible for reducing the abbey to poverty and insignificance by the end of the century. His crozier is very close in form to three others all dating from the 14th century, one belonging to Cologne Cathedral Treasury, another to the Bishopric of Haarlem and the third to New College, Oxford.

The essential characteristics of them all are the applied enamelled plaques, the crockets on the curve of the crook, the supporting angel beneath the crook and the architectural knop. The others are, however, finer examples of goldsmith's work, with more delicate chasing and made throughout of precious metals. The framework of the Victoria & Albert Museum's crozier is of cast and chased copper-gilt, built up in sections, the lower part of the stem, and lower and upper part of the knop, for example, all being separate.

Within the crook a mitred figure, presumably Eberhard de Brandis, is shown kneeling before the Virgin and Child. The angel, who at some stage has lost his wings, supports the crook and below him kneels the small figure of the treasurer of Reichenau, Nicholas of Gutenberg. The long strips of enamelled silver are attached to the head of the crozier by foiled, alternately blue and white gems, and by rosettes. The knop is gabled and pinnacled to resemble a shrine, framing the figures on the enamelled plaques as though they were brightly coloured statues in niches. These figures represent the Virgin and Child, the three Kings, St Mary Magdalen and perhaps St Pirmin, the first abbot of Reichenau. 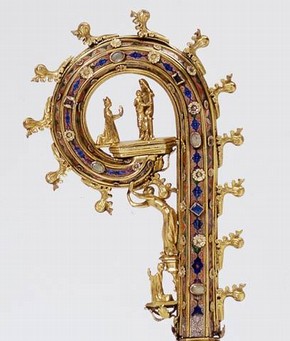 The enamelling is the most important part of the object and is of the translucent 'basse-taille' kind which was common throughout Europe in the 14th century. This is a technique generally believed to have been developed in Italy during the latter part of the 13th century, and involves chasing and engraving the design on silver (or gold) to give the effect of a shallow bas-relief. The glass flux is then laid over it and fired so that the light reflects back through the enamel, revealing the outlines, the varying levels of the ground giving light and shade to the colour.

On the figurative plaques in the knop the predominant colours are royal blue and emerald green, with a dark purple and pink, while the details of the features are added with opaque black enamel. The abstract decorative strips on the rest of the crozier make great use of opaque red enamel in conjunction with emerald green and royal blue.

Where does it come from? The answer to this question can only be guessed at, not proven. Very little is known about the workshops where such enamels were produced but surviving examples suggest that they were being made in France, England, Spain and the whole of the Rhineland as well as Italy. In the Upper Rhineland, there were two main centres of production: Constance and Basle. Of these, the closest to Reichenau was Constance, so it is possible that the crozier was made there.

Another piece, definitely from Constance, is the chalice from St Johann zu Konstanz (in the Walters Art Gallery, Baltimore -at the time when this text was written) which was made thirty years previously. Although the enamelling is technically much finer, there are clear similarities in the conventions for representing the features and the hair, so this supports the inherent probability of the crozier's manufacture there.

There is some restoration to the enamelling, probably carried out in Paris (where Soltikoff lived) about 1850-60.

Written by Anna Somers Cocks, 1978, and published in the V&A Masterpieces series.
Revised 2006.