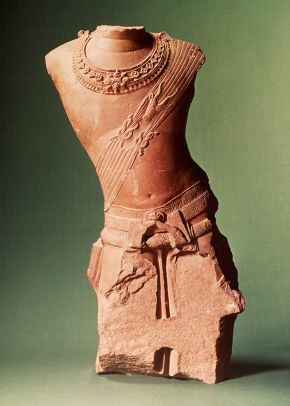 For nearly 100 years, the Sanchi Torso has occupied pride of place in the Indian galleries of the V&A as the most famous and widely admired piece of Indian sculpture in the Western world. Yet, until recently, its origin and identification have been among the highly disputed problems of Indian art history.

Not until 1971 was this controversy finally closed by the exciting discovery in India of the original 'pair' to this torso - another masterpiece by the same hand and in the same material.

The facts surrounding this discovery and how it was made will be summarised here. But we should start by looking at the Sanchi Torso without preconceptions and as any sculptural masterpiece deserves to be approached - that is, visually. At once we have to admit that its description as a torso is not strictly accurate.

We call it 'torso' discounting the legs, only because the lower part is so badly damaged. Yet the legs (or what remains of them) are a vital clue to the figure as a whole - a clue to its graceful, flexed pose known in Sanskrit as tribhanga, literally 'thrice-bent'. The bends of the body are skilfully and subtly modulated against an unstated central line, and so sophisticated is the treatment that we are hardly aware of the statue being closer to a relief than to sculpture-in-the-round.

Looked at from the side, however, it will be seen to be a little more than a facade. India produced very little sculpture in the round, one reason for this being the harsh sunlight which makes free-standing sculpture in the open difficult to look at, and denies subtlety to the play of light and shade; whereas the strong overhead sunlight greatly enhances the effect of relief carving. 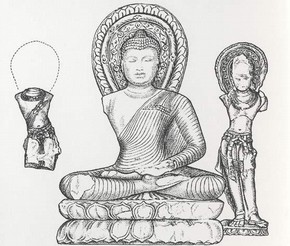 But having noted the relief character, one should next recognise the sophisticated means by which an illusion of the three dimensional is contrived. For instance, by such secondary means as the treatment of the broad, jewelled necklace with its tiny bell-pendants, which are made to recede in size as they round the neck, thus stimulating depth.

Next, one should note the object worn like a sash across the left shoulder: the antelope-skin or ajina. Worn by a king, this symbolised divine right; worn by a priest, ascetic power. A question immediately raised here is whether its appearance denotes a kingly figure (as the rich jewellery might suggest) or a priest (in which case the missing head would have had its hair uncut, matted, and tied up in the manner worn by ascetics). For the moment this question will be left unanswered.

At this point we should not overlook the rather weird treatment of the animal: the head is still intact; the legs are still hoofed and tied fore-and-aft in a kind of reef-knot - all this giving a realistic touch to remind us that it really was a fresh-killed animal. What makes the effect so weird is the tiny scale of its otherwise naturalistic features - as though the artist had wanted to convey its pristine significance, yet recoiled at the thought of animal sacrifice, as any true Buddhist would. 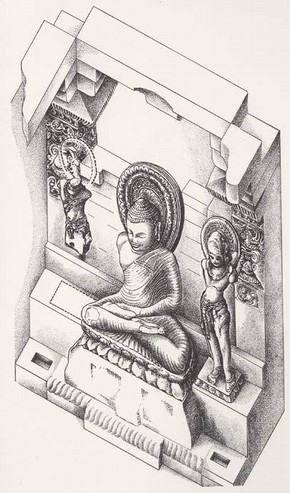 Above the hips, the figure is naked. The only garment worn is a loincloth, which is plain except for a brocaded band at the top. The loincloth is secured by a richly decorated girdle, and a belt with a buckle in the form of a lion's head. It will be noticed how the highly stylized ornament acts as a foil to the naturalistic and sensuous rendering of flesh-surfaces - especially the abdomen. It is precisely this contrast of stylization and naturalism which provides the basic aesthetic tension of much of the best Indian sculpture. It is the means by which Indian art expresses one of its most striking messages, highly topical to the mood of the Western world today.

It could be summed up as the expression of a unitary vision of the material and the spiritual. It implies the rejection of any antithesis between the spiritual and the sensual. In some respects it is the exact converse of what we in the West have been brought up to - the Christian dichotomy of the flesh and the spirit. If you react spontaneously to this sculpture, you cannot fail to be impressed by its deep spiritual quality; yet you will be equally struck by its sensuousness, which tempts you to run fingers over the surface of the abdomen.

The site of Sanchi

The site of Sanchi is an ancient monastic settlement, the ruins of which cover a period of nearly 2,000 years, corresponding to the rise and decline of Buddhism as an independent religion in India. It is situated on a hill-top five miles from the ancient mercantile city of Vidisa, which lay on the great southern trade route linking the Ganges valley with southern India and the seaports on the west coast.

The same route took the traveller southwards to the great cave temples of western India, such as Ajanta, Elura, Karli, Nasik and Kanheri. Thus, Sanchi occupied a key position in the exchange of cultural influences between north and south. Its earliest monuments are the stupas dating from the 3rd century B.C. Their famous carved stone railings and gateways, among the greatest achievements of early Buddhist art, were added between 50 B.C. and 50 A.D. 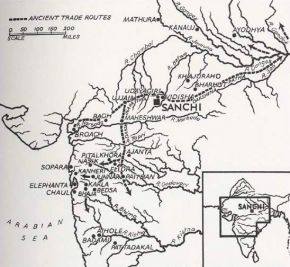 A second great creative phase followed in the 5th century A.D. under the Gupta dynasty, and a third between the 8th and 10th century A.D. By the 11th century, Buddhism in this part of India had been overtaken by Hinduism, and as a result the site lost prestige and patronage. By the 13th century Sanchi is said to have been deserted and its monuments already in decay - a process hastened by Islamic vandalism.

The Sanchi Torso and the V&A

The existence of the Sanchi Torso first came to the notice of the Museum in 1891 in the form of a letter from a certain General Kincaid, lately retired as British political agent to the state of Bhopal (in which Sanchi was then situated). He said that he had brought the torso to England in 1886 after it had been given to him by the Begum of Bhopal, and he described it as a very fine specimen of 'Indo-Grecian art'.

The alleged Greek association was perhaps the main reason for the Museum's acceptance, since at this period Indian sculpture was esteemed only to the extent that it was believed to have been influenced by the Greeks. Once on display, it rapidly gained fame among leading artists and intellectuals of the day, and in 1910 its influential admirers launched a campaign to secure it permanently for the nation. The outcome was successful - but only just in time.

Dark rumours were already circulating to the effect that foreign museums were intriguing with the owner, and when finally a senior government official authorised purchase for £80, he recorded in a minute that he was doing so 'rather than risk any rumpus that would ensue if it came out that Germany had bagged the torso.'

The discovery of a pair to the Sanchi Torso

Drawing of the 'pair' to the Sanchi Torso

Soon after this, Kincaid's claim of Hellenistic origin was discredited, and for the next 40 years most scholars regarded it as a masterpiece of the Gupta period, between the 4th to 5th century A.D. Controversy was reopened in the 1950's with claims of still later origin. And then came the bombshell in 1971 - news that a 'pair' to the Sanchi Torso had been discovered in two fragments in a storeroom at Sanchi. Now, the onus was on the Museum to prove that these figures really did constitute a 'pair'; also, to date and identify them, and to discover the purpose and context for which they had been made.

The major clue came with yet another discovery, hardly less important than the first. It was in the form of an old photograph preserved in the archives of the India Office Library in London - a view looking east from the terrace of the Great Stupa at Sanchi, taken in 1883. In the background the photograph shows the ruins of a shrine known as 'Temple 45', and lined up in front of it a number of fragments of sculpture. With a magnifying glass it was possible to recognise among them both sections of the recently discovered figure. The relevant section of the photograph was then blown up sixteen times its original size, showing that both fragments were more complete at that time than they are today. With this vital new evidence, it was then possible to prepare a detailed drawing of the figure and to show how it would have looked if the two sections had been joined together at the time the photograph was taken.

Among the many new clues now offered were two of particular significance. In front of the left shoulder could be seen the broken fragment of a flower-stem; and above it, at the lower segment of the halo, a scar where there had been a flowerhead. The shape of the scar left no doubt that the flower had not been round like a lotus, but elongated, like a naga-pushpa, the flower-symbol of the Bodhisattva Maitreya. There was now no difficulty in proving that, since this particular figure is Maitreya, the Museum's torso must be Avalokitesvara, on the strength of the antelope-skin. (Hitherto, the skin had been insufficient evidence, because it could have been worn by either Bodhisattva, with different symbolic meaning).

Another major clue provided by the enlargement was the fact that the figure, instead of being centred on its lotus-pedestal, was slightly to one side. There could be only one explanation for this: that the figure was designed to stand beside a seated Buddha in a confined space - so confined that, if not off-set on its pedestal, the knee of the central figure would have obstructed its legs.

By exciting coincidence, exactly such a seated Buddha figure survives in Temple 45 at Sanchi up to the present day. Moreover, the off-setting of the two Bodhisattvas on their pedestals is just sufficient to have enabled the whole triad to fit into this particular shrine with good visual effect, in such a way that the side-figures would not be unduly pressed against the central image and its knees. We see too that when the shoulders of the three figures are approximately aligned, the result is a perfectly logical composition.

With this final link in a long chain of evidence, we are left in little doubt that the Museum's masterpiece, and the triad of which it once formed a part, were specially designed to occupy the unusually narrow confines of Temple 45. Since analysis of this ruined temple shows it to have been completed in the second half of the 9th century A.D., a logical date for the installation of the triad would be about 900 A.D.

Written by John Irwin, 1976, and published in the V&A Masterpieces series. Revised 2006.