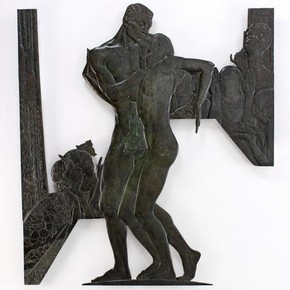 This relief and a companion firebasket were commissioned by Henry Mond (1898–1949), later the second Lord Melchett, as a part of a decorative remodelling for the drawing room of Mulberry House, Smith Square, Westminster, London. They were designed by Charles Sargeant Jagger (1885–1934) in 1930. Henry Mond and his wife Gwen made the commission as a humorous reference to their early ménage à trois with the writer Gilbert Cannan. The Scandal relief depicts the 'guilty' couple standing naked before outraged onlookers who peer at them with hands raised in horror.

Both objects are highly original works of art, signed, documented and dated, rich in symbolism and forming an integral part of the opulently decorative interior, also designed in 1930 by the architect, Darcy Braddell (1884–1970). This commission was reviewed by Professor C.H. Reilly in Country Life (June 6, 1931, pp.736-8). His observations underline the importance of the firebasket and its integration with the total scheme:

'In the drawing-room, a fine apartment about 36 feet long by 26 feet wide, with three long windows on one side to Smith Square and two at one end to South Street, he [Mr.Braddell] has remodelled the walls and ceiling and, with the help of two Academicians, Mr. C.S. Jagger the sculptor and Mr. Glyn Philpot the painter, has brought into existence what must be one of the boldest, most complete and original schemes of decoration of our time.

'The room as Mr Darcy Braddell designed it was simple, light and bright, with silver foil walls, green bronze doors with polished cream marble architraves, the main one in the centre of the long wall being given a very monumental setting with fluted Doric columns. In the centre of the end wall is an equally monumental fireplace in the same marble. This Mr. Braddell has built up in broad recessed planes, leaving a great panel over the fire to be filled by an exquisite bronze relief by Mr. Jagger. Leaving is again not the right word. The two artists, architect and sculptor, must have designed this panel together, so completely does it belong with its broad stretches of plain marble to the marble planes of the architecture. The bronze itself is a very delicate piece of modelling, and seems - if one must find a meaning for it - to represent "Scandal". The central pair of nude figures - the lovers - while they make an interesting wall pattern, is a very expressive piece of modern sculpture, the angularity of which seems to heighten the emotion. The other figures in the background, making a rich texture with their clothes, are, one supposes, discussing and criticising the lovers - a very proper satire on the ordinary uses of the drawing room.' 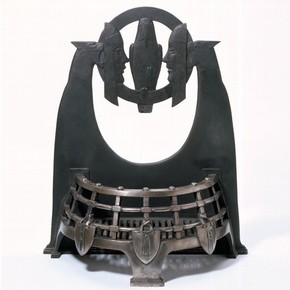 To match the mixture of motifs in the Philpot murals, Jagger arranged the figures of the lovers in a dynamic zigzag composition, flattened against the composition in a playful reference to an Assyrian relief. This archaic element, repeated and echoed in the design for the firebasket, indicates the extent to which Jagger had begun to take a more decorative approach to sculpture and anticipates changes that were to emerge in his late monumental works. The strongly Art Deco element in the relief and the firebasket firmly established an element of radical modernity to the whole scheme, challenging accepted conventions in interior decoration. This challenge reflected the Monds' scandalous liaison which further challenged society's rules not only by its unconventional nature but by being a love-match between different classes: Henry, heir to the ICI fortune, and Gwen, a colonial, from an unknown South African family.

The firebasket continues the scandal theme depicted in the relief that hung above the fireplace. It bears the initials HM and GM on the shields round the basket and the back has two snarling cats hiding behind female masks, depicted in shallow relief, signifying the 'double-face' and 'cattiness' of society gossip. In the centre, also in shallow relief, is a macaw, probably modelled on Bill, Jagger's fierce pet parrot, playing with the idea of 'parroting' phrases without thought for content or meaning.

The V&A would like to record its gratitude for the generous support in this acquisition to The Art Fund, the Old Possum’s Practical Trust, the National Heritage Memorial Fund and the Friends of the V&A.