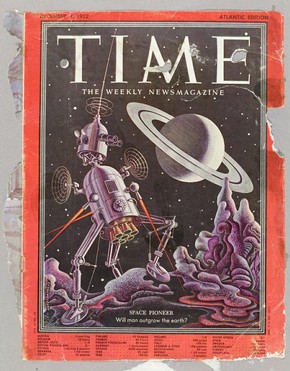 The space race was the most dramatic sphere of Cold War competition. Man's journey into space required tremendous ingenuity - from the powerful rockets which fired satellites into orbit to the suits which sustained life in the dark vacuum of space.

Hi-tech innovations were not the only results of the space race. It triggered profound reflections on humanity's relationship with the cosmos and growing dependence on technology.

The house of the future was a preoccupation of architects in the period. In 1956, British architects Alison and Peter Smithson designed a 'House of the Future' for the Ideal Home Exhibition in London. The house was a prefabricated space-age unit furnished with the latest concepts of labour-saving devices. Sound-proof and fire-proof, the house was like both a spaceship and atomic bunker.

Many other designers were inspired by new materials, such as stretch fabrics and moulded plastics, and new vocabularies of form.

Satellite transmissions of radio, telephone and television signals wrapped the globe in a force field. These pulsing microwaves required a new kind of building: the television tower. Built on both sides of the East - West divide, telecommunications towers were not merely hi-tech instruments or symbols of Cold War competition. Welcoming the public to their viewing platforms and revolving restaurants, they were places where the future could be experienced. 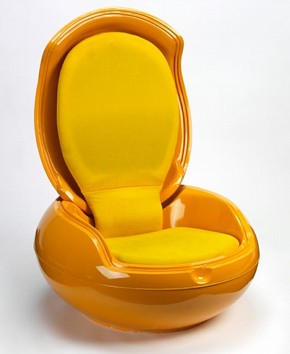 In the late 1950s and 1960s, architects and engineers began to imagine an entirely new scale of architecture. Future cities might hover in the air like spacecraft, move around on mechanical legs or plug in like giant computer components.

Many of these schemes captured deep anxieties about modernity. New cities were proposed for inhospitable settings such as the frozen lands of the arctic. But what kind of future faced humanity when it needed to colonise the edges of its planet?

Research into space and military technologies provided new materials and new conceptions of the body in the 1960s.The spacesuit was a complex synthesis of life-support and communications equipment which would, in 1965, enable Soviet cosmonaut Aleksei Leonov to make the first space walk.

In the mid-1960s, the space race also inspired designers to create terrestrial fashion which mirrored the futurism of the age. Metallic fabrics, helmets, visors, jumpsuits and body armour were all employed to create 'uniforms' of tomorrow.