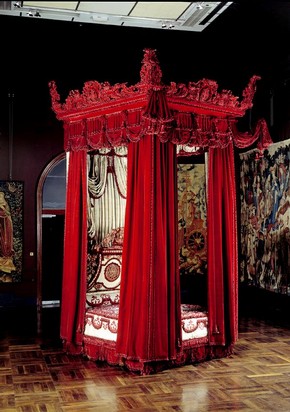 The State Bed from Melville House, Fife, is the most spectacular single exhibit in the Victoria and Albert Museum's British Galleries. It still has its original luxury hangings of crimson Genoa velvet, backed by ivory Chinese silk damask linings embroidered with crimson silk trimmings. The bed was an extraordinary commission, made in 1700 for George, 1st Earl of Melville for the Apartment of State at his new Palace.

George Melville served as William III's Secretary of State for Scotland, from 1689 to 1691. By the late 1690s his most important political days were behind him and he faced the prospect of retirement without an appropriate country seat. With an earldom, newly acquired in 1690, he needed to demonstrate the enhanced status of the Melville family.

The motivation for the commission for a great house and suitable furnishings was inspired by the recent history of the Melville family. George Melville and his younger son David had spent the period from 1683 to 1689 in exile on the continent. Earl Melville had been involved in the Rye House Plot in 1683 to put James, Duke of Monmouth, King Charles II's illegitimate son, on the throne. Because of Melville's implication in this plot, the Melville estates in Scotland were confiscated. Although they were restored to the family in 1686, on payment of a £3000 fine, Earl Melville remained in exile, only returning to Scotland on the accession of William and Mary in 1689. Melville's appointment as Secretary of State for Scotland was the result of family loyalty to King William, nurtured during his exile in Holland, and he was made an earl in April 1690.

In 1700 there were occasional hints that William III might visit Scotland, but is it possible that this great bed was really commissioned to accommodate the monarch on his projected visit to Scotland? There is no doubt that the Apartment of State was inspired by similar apartments in royal palaces and stately homes, made in readiness for a royal visit.

The quantity of luxurious fabric needed and the skilled workmanship required to achieve the resulting theatrical effect would have cost hundreds of pounds in 1700. The hangings consist of approximately 85 metres of velvet, 114.5 metres of damask and 62 metres of supporting linen and buckram. The design and production of the bed was, judging by contemporary bills, also likely to cost several hundred pounds. The actual construction was surprisingly simple, proving that experienced carpenters employed by the upholsterer were able to work swiftly, not wasting time on finishing the woodwork where it would not be seen.

That the state bed is upholstered in crimson fabric is indicative of status. Crimson was the most expensive colour and thus the grandest. However, there is no evidence that Melville House was used for official entertainment. On the contrary, the recorded visitors during the first earl's lifetime were mainly family members, and the Melville bed therefore epitomises the political environment in which the Scottish magnates competed for status.

The Melville Bed was assembled at the V&A over several days. Made up from 60 individual parts, the bed is beautifully constructed, as this video shows.