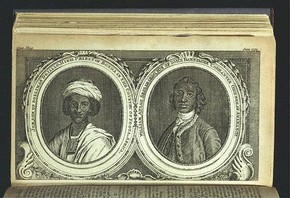 This engraved double portrait presents two early African visitors to London: Job Ben Solomon (1701-1773, also known by his African name Ayuba Suleiman Diallo) and William Ansah Sessarakoo (dates unknown, alternative spelling Ansa Sasraku). The image appeared as a bookplate in The Gentleman's Magazine & Historical Chronicle in 1750, the same year as a book on Sessarakoo was printed in Britain called The Royal African.Job Ben Solomon, as he became known in Europe, was born in Gambia, West Africa, to a prosperous Muslim family. At the age of 29 he was captured as a slave and taken to the coast where he was sold and transported to work on a plantation in Annapolis, Maryland. Like other slaves he chose the only form of resistance available to him: he ran away. He was captured and imprisoned but during his incarceration met the lawyer Thomas Bluett who, on becoming aware of Solomon's high status background, bought his freedom. The two travelled together to England in 1734 where Solomon learnt English and became a prominent intellectual (his transcriptions of the Qu'ran are still preserved in Oxford). He later returned to his homeland where he resumed his inherited position. Solomon's memoirs were published as one of the earliest first-person accounts of the slave trade in Bluett's Some Memories of the Life of Job, the Son of the Solomon High Priest of Boonda in Africa: Who was a Slave about two Years in Maryland; and afterwards being brought to England, was set free, and sent to his native Land in the Year 1734.

Sessarakoo was the son of a wealthy Fante chief based near a trading post established by the Dutch on the West African Gold Coast (present-day Ghana). His father, known as 'John Corrantee' (this name appears above Sessarakoo's portrait), was a trader in gold and slaves. To improve communication with his business partners Corrantee arranged for his son to be educated in England. With a companion, Sessarakoo began his journey to Europe but at Bridgetown, Barbados, they were sold into slavery by their British sea captain. The captain died soon afterwards and Corrantee, on learning of the abduction, used his trading influence to have his son freed. Sessarakoo eventually arrived in London and became a high profile figure in the London scene; his story retold through prints, poems, newspaper reports and The Royal African. His noble status reminded Londoners of the popular story of Oroonoko, based on a novel by Aphra Behn, which told the tale of a noble African chief sold into slavery.

The two portraits are based on other sources. The image of Job Ben Solomon was created by 'Hoare' (probably William) in 1734 as a frontispiece to the Bluett biography. The depiction of William Ansah Sessarakoo was based on a 1749 oil painting by Gabriel Mathias, which was reproduced later the same year as a mezzotint by John Faber. Both images are untypical of the period in presenting black people within the formal tradition of European portraiture. More frequently black people were depicted by European artists as servants or slaves. In the double portrait Solomon is shown wearing African dress (a turban and loose gown) with a Qu'ran strung from his neck and Sessarakoo in British dress including an elaborately brocaded jacket and hair styled in a fashionable European shape. Both subjects are awarded dignity and gravitas by the artist. While their high-born status enabled them to escape the harsh conditions of the slave trade, even to gain prominence and respect amongst London society, their experience was very much exceptional.