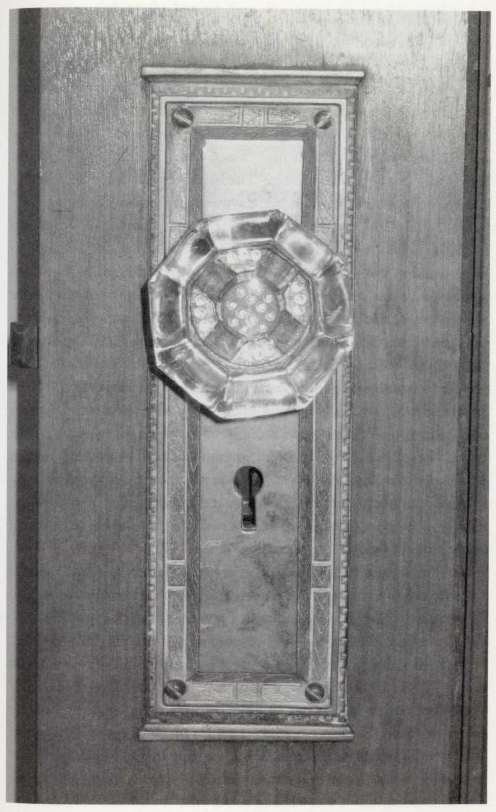 'Extremely Loud and Incredibly Close' is as much visual as it is textual. The author selected and arranged the illustrations himself from found images. Although he does not describe himself as an artist, Safran Foer does privately produce some sculpture and collage and has previously collaborated with visual artists. He will continue with a visual element in his next book Joe, on which he is collaborating with sculptor Richard Serra and photographer Hiroshi Sugimoto.

‘I was browsing the Internet one night – allowing links to carry me farther and farther from the news sites I normally visit – and was shocked by the breadth and graphicness of the images I quite unintentionally came across. There’s something exhilarating about being so close to everything at once. It made me think about the visual environment in which [children] are now developing.’ 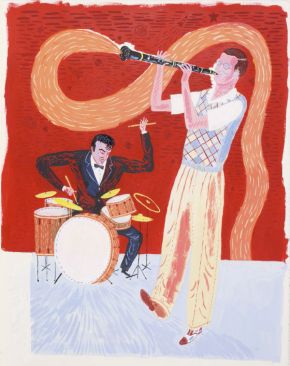 Jonny Hannah studied at Liverpool Art School and the Royal College of Art. He has worked as an illustrator since graduating in 1998 and also teaches illustration at Kingston University.

A major output of Hannah’s creativity is his own imprint, Cakes & Ale Press, where he publishes screenprinted limited edition books and posters. The poster theme can be seen in 'Hot Jazz Special', which introduces children to jazz in the form of an evening at the Body & Soul Café. Each spread is laid out in poster-style with illustrations and a text full of vigour and rhythm. Hannah’s work on the book led to a commission to produce publicity for the 2005 Birmingham Jazz Festival. 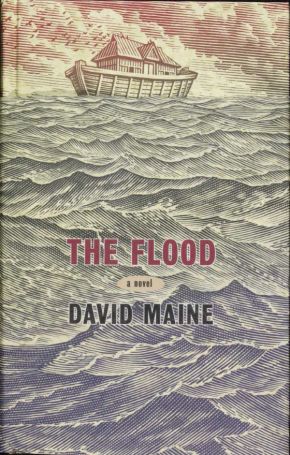 Bill Sanderson (illustrator) and Steve Snider (designer), cover with dust-jacket to 'The Flood' by David Maine

Bill Sanderson studied Illustration and Graphic Design from 1966 at the West of England College of Art and first taught art at a school in London while establishing his freelance work.

Sanderson’s ambitions at college leant towards sculpture, which perhaps explains his success with scraperboard. This is a monotone technique with similar results to wood engraving. It involves scraping away the layer of ink that lies on a board coated with white clay. The technique is very versatile in that it can allow for fine, detailed drawing. It works well with bold design approaches, like this one, that exploit the striking effect of black and white.

‘It is still one of my great excitements to be given a problem to solve by means of illustration, a unique medium which can communicate the sense of an article or book, with something arresting and extra added.’

Steve Snider is a graduate of the School of the Museum of Fine Arts in Boston and has worked as design director in advertising as well as in publishing.

‘"The Flood" is an unusual literary novel that re-imagines the story of Noah as told by his wife and other family members. For the packaging, I decided to do something conceptual like the book itself, creating a two-part cover that told the story of the flood both as it was happening, and after. For the illustration, I chose Bill Sanderson to do a contemporary spin on biblical engravings in black and white.’ 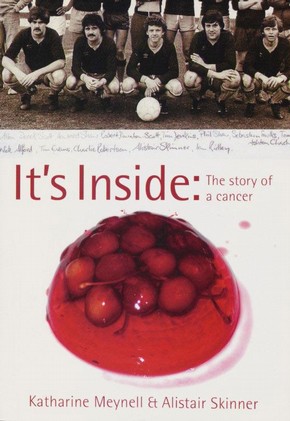 Katharine Meynell studied at the Byam Shaw School of Art and the Royal College of Art. As an exhibiting artist, she works with video as well as making artist books and sculptural objects, combining image with text in her installations. The National Art Library at the V&A has four of her artist books.

A video and sculpture installation of 'It’s Inside' was shown at Café Gallery Projects in Southwark in May 2005. It represented the experience of illness, reflecting differences between medical and personal responses. The surreal nature of this experience is represented on the cover of the book by cherries in jelly, one way in which Skinner visualised his tumours when on morphine. Based on sketchbooks and diaries, the book layers information that can function in parts, simultaneously overlapping or cross referencing.

‘By working with Marion Boyars Publishers, I was able to make an artist’s work, with control of the image, text and design, placed within the mainstream book market. I tried various options [with the cover], finally working out a structure with actual biopsy material printed as endpapers, with a ribbon bookmark to reinforce the sense of a diary form.’

Rose is a printmaker and photographer as well as designer and has worked in editorial, advertising and book design. Her first love remains book covers. She is the sole designer for Marion Boyars Publishers as well as working freelance for other publishers.

‘I feel very privileged to be earning a living doing something I enjoy so much and which seems to me the perfect combination of responding to literary works and creating images. I get to exercise all the bits of my brain to produce designs, which satisfy me aesthetically as well as being true to the text.’

Przemek Sobocki, original illustration to Touch, in 125 Magazine, Issue 04, September 2004. Inspired by the ending of Krzysztof Kieslowski's film The Double Life of Véronique when the main character touches a tree to confirm that she exists.

The illustrations to ‘Touch’ are the first that Sobocki has published as an illustrator. Born in Poland, he specialised in Interior Design at the Akademia Sztuk Pięknych in Wrocław and made his first career as fashion and interior designer, including set and costume design for the theatre.

‘Touch’ reveals Sobocki’s roots in fashion and design, in the choreography and demeanour of its characters and in its portrayal of real designers’ outfits.

Of his switch to illustration, Sobocki says,

‘Illustration allows me to use my skills as a designer and fine artist, to show my interests, like cinema, photography, architecture, animation, books, fashion, design, as well as express the emotional part of me. The emotions are sort of trapped in it, you can "feel" them.’ 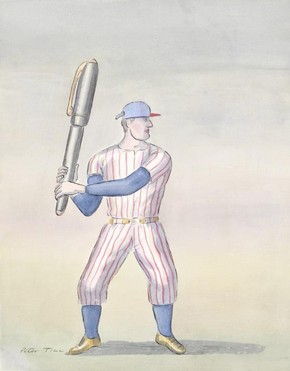 Manchester-born Peter Till read English Literature at Cambridge University and worked as a writer and performer in the theatre group The Flies. He had always illustrated on the side and in 1970 decided to take a slim portfolio of drawings to two magazines, Time Out and OZ. This was the start of a distinguished career in illustration.

‘My father was a "commercial artist" and I was always surrounded by artists materials. I tried to avoid art by reading English but reverted to type. In fact the sort of illustration I like is quite cerebral and the mental processes involved are not dissimilar to those required for writing.' 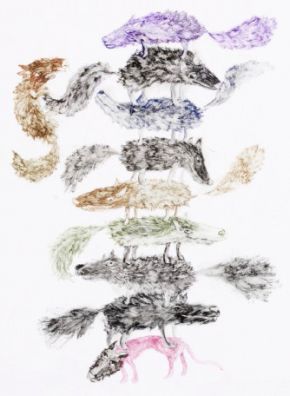 Kent Institute of Art and Design

Julianna Kasza came to Kent from a Graphic Design course at the Hungarian University of Art and Design. She previously graduated from an art secondary school in Hungary where she studied mainly book arts, from design to bookbinding, book illustration, typography and photography.

Kasza is particularly interested in illustration for its imaginative and narrative application. She is inspired by medieval woodcut illustration, when artists were not so knowledgeable about rules of delineation such as perspective but knew how to create a narrative through pictures.

Of her work on Piglet, Kasza says

‘I was always criticising myself, and making little changes, planning the pictures smaller and smaller, to focus my ideas more accurately.’ 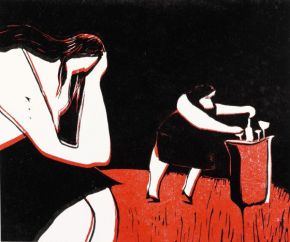 Swava Harasymowicz is currently studying for an MA at the Royal College of Art. She previously gained a first class degree in Illustration at Middlesex University and also studied in Kraków, Poland.

She is interested in the relation of text to image but can also see herself working in poster and commercial art, or self-initiating print art projects. Her inspirations are diverse. They range from Byzantine art and early Renaissance masters such as Giotto and Botticelli, to Picasso and Modigliani, Hopper and Warhol, German and Russian graphic art, and Polish poster art from the 1950s and 1960s.

These illustrations provide a sort of bittersweet take on real life situations, doubts and aspirations. They represent both real and symbolic events. 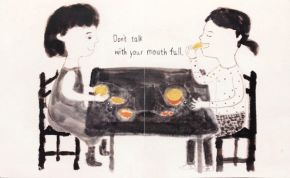 Meng-Chia came up with the story for OH! after swallowing an orange pip while chatting to her mother.

‘She said to me that I don’t need to buy oranges in the future! I chose ink with a touch of orange to make the book with a simple but practical message for children, "Don’t talk with your mouth full".’
Meng-Chia Lai 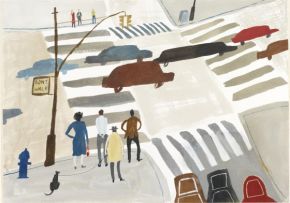 The paintings and subsequent book, A Walk in New York, developed from sketches Rubbino made while visiting the city in summer 2004:

'New York proved to be the spectacle I have always imagined and the subsequent book is my response to this wonderful city' - Salvatore Rubbino.

The paintings appear in the book alongside some of his sketchwork. Rubbino sees the sequence of eight images as accompanying a short story in a book or editorial supplement.