Is this a Chippendale Chair? 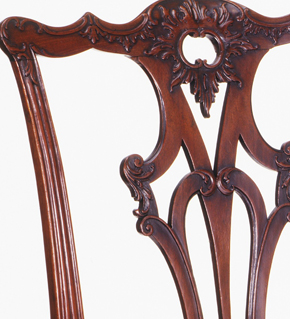 Thomas Chippendale (1718-1779) made his name as cabinet maker in 1754 when he published The Gentlemen and Cabinet Maker's Director. It was the first British furniture catalogue and was published at a time of change, when cabinet makers were taking over from upholsters as the trade that controlled the furnishings of houses.

Chippendale not only  created the designs but also found the clients and organised the workshops in St. Martin's Lane, London. A Scotsman, James Rannie, provided the necessary financial backing for the business.

Chippendale's designs were widely copied by cabinet makers in Britain but also in America but also throughout Europe. New editions of the Director were published in 1755 and 1762 and the designs have continued to be re-printed to this day.

The slightly curving back legs reach up to form the back rest and the back splat is carved in symmetrical scrolls with detailed carving of leaves around a central double
C-scroll sunburst.

This was Chippendale's most popular chair design. It is made of high quality mahogany and retains all its original stretchers and oil polish. The symmetrical carving of the back is copied from a design rather than freely carved. It lacks the vitality of carving on documented Chippendale chairs.

Find out whether this chair was from Chippendale's workshop, by examining the design, the craftmanship and the results of shining infra-red light on a hidden inscription.

Video: Is this a Chippendale Chair

NOTE: There is no sound with this video

Was this chair made by Thomas Chippendale?

We know the design was published by Chippendale in 1754

But many different chair makers used his designs

The designs were interpreted freely, even in Chippendale's own workshop

So, was this chair in Chippendale's own workshop?

The carving on the front is crisply cut

But it lacks the liveliness we would expect from Chippendale's carvers

However, other aspects of the construction are of high quality

The uprights have been embellished with grooves

And the curve of the back is well made

Is there any other evidence to help us decide who made the chair?

This chair is part of a set of six

One has a hidden inscription under the pedestal

Although this confirms the design was by Chippendale, it does not confirm the maker

There is no such bill