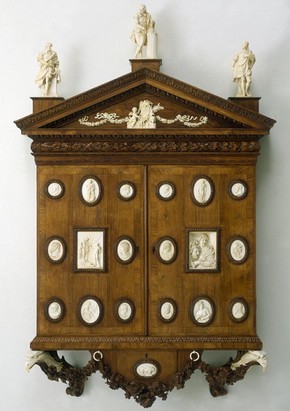 Just as many school leavers today go on 'gap' years, 200 years ago it was fashionable for young gentlemen to go on a Grand Tour of Western Europe.

It was considered important for a young man to have good taste, which meant looking back in admiration at examples of classical antiquity in architecture, sculpture and paintings. Believing that the ancient Greeks had perfected order and harmony, fortunate men and women travelled to Greece, Italy and France to see such beauties as the Parthenon, the Acropolis, classical sculpture and famous paintings. Horace Walpole, son of the first prime minister Sir Robert Walpole, and his 'very intimate friend' Thomas Brand were lucky enough to go on a two-year Grand Tour around Italy and France at the age of 23 in 1740.

Horace, like most others, made sketches, wrote letters and collected souvenirs. His souvenirs included carved ivory heads of both classical and biblical figures, for example Medusa, Minerva, Diomedes, Perseus and Andromeda and Judith Holding Holofernes's dead head. Most of these were based on famous antique gems and it is believed that some of them were made by the Roman sculptor Andrea Pozzo (1642-1709).

Understandably, Horace Walpole arrived home in 1741 extremely enthusiastic about classicism and more appreciative of his father's Palladian home Houghton Hall, Norfolk. Full of inspiration, Horace promptly commissioned the cabinetmakers William Hallet of Great Newport Street, London, to make a wall cabinet to display his collection. At the same time William Kent, who had designed the interiors of Walpole's father's home, was working in the next door house in Arlington Street, London. It may be no coincidence that the classical pediment on the top of Horace’s cabinet reflects the door frames in Houghton Hall. 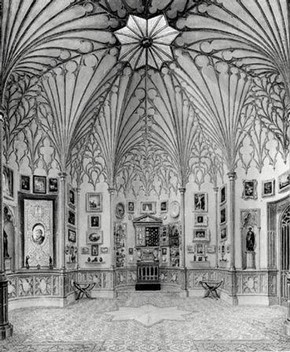 The Walpole Cabinet in situ at Strawberry Hill

These three statues were to stand on the very top of the cabinet. The miniature ivory souvenirs which Horace had collected on the Grand Tour were attached to the two doors in a symmetric pattern. Horace hung a further collection of painted miniatures inside and the completed piece has been described as a reflection of Walpole’s taste.

It can be seen on display in the new British Galleries at the Victoria and Albert Museum in a case dedicated to Horace Walpole as a collector. Indeed, he had many admiring friends and it is known that none other than his travelling companion, Thomas Brand, had a replica of the cabinet made by the same workshop.