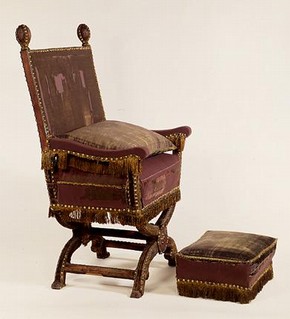 Many objects have stories behind them but it is not often that objects have such a vivid history as this chair and footstool does. The chair dates from 1661 and is the earliest surviving example of upholstered furniture.

It is covered in a rich, originally purple, velvet with gold trimmings. It is a rare type made only for royal palaces and a few great houses and, being made of beechwood, which is very prone to woodworm, few chairs such as these have survived.

However these are not the only reasons why it is special. Two family traditions have linked the chair with William Juxon who, as Bishop of London, attended Charles I on the scaffold at his execution in 1649 and was present at the coronation of Charles II. It was indisputable that the chair belonged to William Juxon as it had been passed down through his family but it was not clear as to whether either of the two family stories held any truth.

One of the stories which had passed through time was that it was in this chair that King Charles sat at his execution and that ‘his Majesty kneeled on the stool when he received the fatal stroke’. This led to the suggestion that the stains on the seat of the chair were that of blood. After the execution, so the story goes, Juxon took the chair, as part payment, to his home in Little Compton where it remained until 1794 when it was then sold to a Mr Sands. The second story relates that the chair has a connection with another Charles; this time Charles II at whose coronation in 1661 Juxon was present, as Archbishop of Canterbury, and that it was after this occasion that Juxon took the chair home. 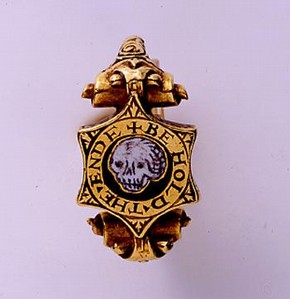 Often a little bit of detective work is needed to discover whether family legends such as this are true. In the 1990s it was proved that the chair had not been at Charles I’s execution but had been made for the coronation of Charles II in 1661. Through the examination of the Lord Chamberlain’s accounts for the coronation it was confirmed that John Casbert, an upholsterer, was paid £4 for ‘making a rich purple velvet Chaire of State for the Bishop wth a foot stoole and seat cusshion suitable: fringed with gold fringes an double gilt nailes with cases of Bayes’. Ralph Silverson ‘fringe maker’ was paid £29 for the gold trimmings. Other records of the time confirm John Casbert as an upholsterer in London between 1660 and 1676, when he supplied furnishings for royal palaces as well as fittings for royal yachts.