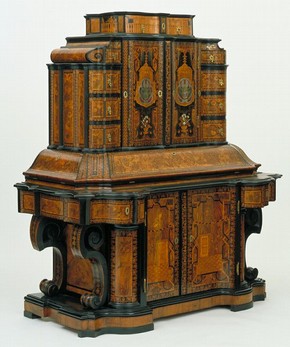 As much as a car or a house might be today, in the 18th century writing cabinets such as this were often important indicators of a gentleman’s status. This cabinet is a fine example of the best craftsmanship of the period and, with its large size and intricate detail, tells us of the importance of Johannes Gallus Jacob von Hohlach, for whom it was made.

Although often we can learn a lot about the owners of cabinets, it is more difficult to learn anything about their makers. However in 1967 the grandchildren of the last owner found a piece of paper in a secret compartment of the cabinet. It had been hidden for 250 years and, after translation from German, revealed to us some information about the two men who made the cabinet.

The paper, signed by Jacob Arend and Johannes Wittalm, is dated 22 October 1716. They were much concerned with the hardship of their lives at the time they were making the cabinet, telling us that,

'Cabbage and corn were often the best food we could obtain. We got so fat from this that we could hardly mount the stairs. We got very little meat…As soon as we received our week’s wages we would both get right drunk.'

On the back of the paper Jacob Arend writes,

'I...have invented the cabinet on my own, and have drawn and marked it out. I have cut it [the marquetry] with a fret-saw and shaded it.'

We do not know the full history of the cabinet but it was bought, in England, by John Gibbon in 1843 for £160. It then remained within the Gibbon family, being recorded in the background of a family portrait called The Shell by Charles Robert Leslie in 1846, until the Victoria and Albert Museum acquired it in 1975.