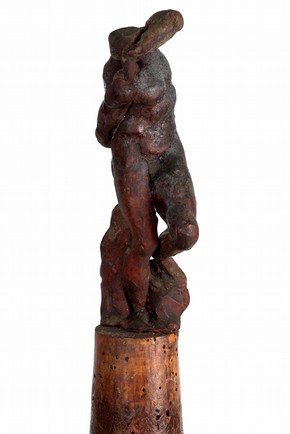 This small wax figure is a sketch model for the unfinished marble of the Young Slave in the Accademia in Florence, designed for the 1516 scheme for the tomb of Pope Julius II, who died in 1513. This scheme was the third of six produced for the problematic project, which, when it was commissioned in 1505, was planned as a large free-standing structure with more than 40 life-size or larger statues, and was intended for St Peter's in Rome. The existing, greatly reduced tomb was finally erected in San Pietro in Vincoli, Rome, in 1545. This model differs from the unfinished marble in several details, suggesting that the artist refined the design at a later stage.

Michelangelo made a large number of drawings and models in wax, clay and terracotta in connection with both his painting and his sculpture. He destroyed many of his preparatory works, but the growing interest in the creative process and his extraordinary celebrity led several of his contemporaries to collect his drawings and models. One such collector was the painter and biographer Giorgio Vasari, a great admirer and friend of the artist. In his Life of Michelangelo he described what he claimed to be the sculptor's working method: a small model of wax or other firm material was immersed in water and gradually raised to reveal more of the figure as the carving of the marble progressed.

Male narrator:
In one of the cases in front of this audio point, there is a small reddish wax model showing the contorted figure of a male nude. It was made by Michelangelo, arguably the greatest artist of the sixteenth century. It was made as a study for a figure of a slave - one of 40 large marble statues that were planned to decorate the tomb of Pope Julius II. But Michelangelo, who received the commission in 1505, was kept so busy by the Pope and his succesors that he never completed the tomb.

Many of the objects in this part of the gallery are models, rather than finished works of art. They show the early stages in the creative process when an artist is exploring and developing ideas. Models helped a sculptor to finalise a design before carving in marble or other expensive materials. Wax was an ideal material to make quick sketches as it becomes supple when warm and can be shaped and re-worked as an idea changes.

Michelangelo destroyed many of his preparatory models. But his fame - as well as a growing interest in the creative process - led collectors to acquire and preserve some of his drawings and models. Thanks to generations of collectors who treasured this fragile wax model, it has survived for more than 500 years.

How did sculptors make wax models?

In this audio, learn about the preparation and the role of wax models in the sculpture process. Wax models are original and unique creations that were sometimes works of art in their own right and sometimes an intermediary stage in the sculptural process. Many bronze sculptures, for example, are cast from models that were first made in wax, involving a highly skilled process known as lost-wax casting.
Download: mp3 | ogg View transcript
Female narrator:

Peta Motture:
What artists would do is to take the wax and add into it some animal fat, which would make it malleable, and a little bit of turpentine that would enable it to just give it a little bit of strength. And if they then wanted to work in a colour, like this one is red, they would add something like red earth or vermillion and they'd grind this up, put it in the molten wax, then when the wax had cooled down they made little rods and from those they were able to pick off pieces of the wax and add bit by bit to the model. In some cases you would work the wax around an armature, a central support that could be wood - in this case it's metal, it's just a metal rod. You didn't have to do that, but that's what Michelangelo did in this particular case and that way it gave it some kind of strength and stability. And the fascinating thing as well about Michelangelo and this model in particular in relation to the marble that was ultimately made from it, was that it shows exactly how he worked.

Female narrator:
Models would often have been kept in the sculptor's studio after the design was finalised. According to the sixteenth century artist and writer, Giorgio Vasari, in his 'Life of Michelangelo', sculptors also used models during the marble carving process.

Male voice:
'One must take a figure of wax or some other material and lay it horizontally in a vessel of water; then, as the water is, of course, flat and level, when the figure is raised little by little above the surface the most salient parts are revealed first, while the lower parts (on the underside of the figure) remain submerged, until eventually it all comes into view. In the same way figures must be carved out of marble by the chisel; the parts in highest relief must be revealed first and then little by little the lower parts. And this method can be seen to have been followed by Michelangelo in his statues of the prisoners.'