Ceramic Intervention on the V&A Façade 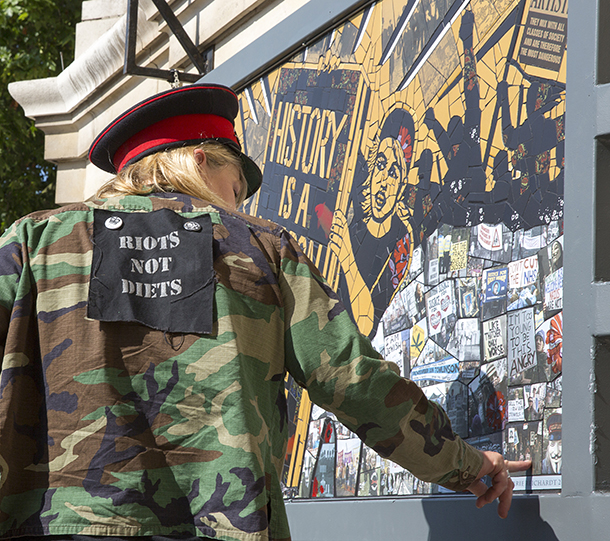 Ceramic intervention on the V&A façade By Carrie Reichardt and the Treatment Rooms Collective, 2014

The intervention on the steps and façade of the Museum was made in response to the exhibition Disobedient Objects. It reflects the idea of a people’s history of art and design from below, and it invites us to consider activist social movements as a significant part of our culture.

Quotations inserted between the steps represent the voices of activists and political thinkers, from 19th-century anarchist Emma Goldman to an anonymous slogan on a 1970s badge. On either side of the entrance, two ‘ceramic posters’ collage images of protest in Britain, past and present. They intentionally cover over an inscription commemorating the inauguration of the building by the ‘Empress and Emperor of India’ (Victoria and Albert). The contemporary scenes are autobiographical, and represent actions that Reichardt, her friends and family were involved in.

Reichardt describes herself as an ‘extreme craftivist and renegade potter’. The intervention was made over a short, intense period and mobilised the skills of a collective of mosaic artists.

With Thanks to Heraldic Pottery

Carrie Reichardt: The relationship of my craft to my activism is that I feel that I use all my skills as an artist to try and bring about social change; to try and use it for good. Working in the communities or with the public work that I do, I’m always just trying to use whatever talent I have as a vehicle to help put forward, you know, push forward a social agenda.

For me, this piece is all about trying to tell the people’s history of civil disobedience and dissent in a kind of a ceramic way. We’re trying to make these two big pieces that from a distance - when you look at them - they just show the aggression of the state oppression, of authority.

The writing on the steps, that’s all just my favourite quotes and favourite sayings that again I think will try and encourage people to think about really, really fighting back on a civil disobedience creatively.

The way that I see that this work relates to the show ‘Disobedient Objects’ is that we really are a group of disobedient artists who’ve made this. It’s like we’ve kind of been given a commission based on the high level of craft of what we’re doing but we’re using it as a way to put across the most powerful call to arms that we can to people to rise up and to actually fight back.

This is very personal. I have my family in here and I have my extended friends in this piece and it really was a…you know, everyone I’ve spoken to has just wanted to help, wanted to make this happen because they saw the importance of being able to tell the people’s history. You don’t very often get to tell it from that side. We get taught a history that’s very much based on Empire and the Great British colonial past but we never get the collective people’s history, which is the people who suffer, always at the bottom. So I think, in a way, this piece is fantastic because it’s been made by all the people at the bottom and it’s going on the front of the V&A. What more could you ask for?