Musical Wonders of India: About the Project

The V&A holds a remarkable collection of 19th century Indian musical instruments. These are the subject of a project carried out in partnership with Darbar Arts Culture Heritage Trust. You can learn about the fascinating examples selected for the project in these pages, and find out more by visiting a special digital exhibition where leading musicians show how they were played:

A selection of five of the most beautiful and interesting instruments in a special display in Room 41, the V&A’s South Asia gallery, 16 September 2015 - 31 October 2016. For the first time, the instruments are displayed in positions similar to those in which they would have been played. These and further examples can be also be viewed online. 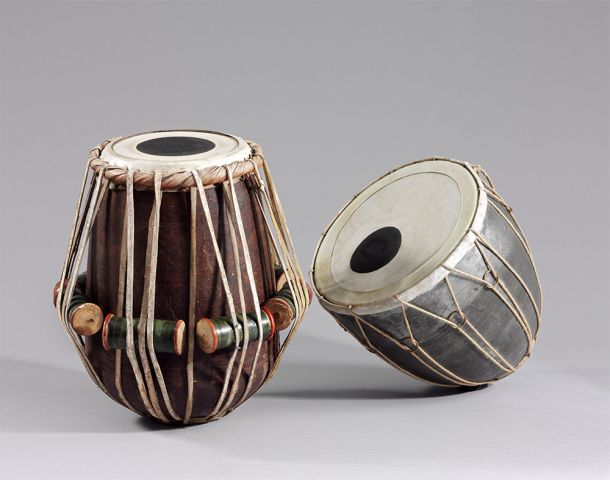 India has rich traditions of classical, folk and devotional music. Indian classical music consists of a series of improvisations based on ragas (musical modes), so that each performance is unique. The primary focus of this project is on the classical styles but the V&A’s holdings include instruments from all these traditions and from different regions of India. There are examples representing the Carnatic traditions of the South as well as the Hindustani or northern Indian styles, and the collection includes beautifully crafted instruments that could have been seen at the royal courts, fascinating folk instruments and also other types of a rarer or more curious nature. They are made from an astonishingly rich and complex range of materials encompassing many components from steel and brass through painted wood and ivory to peacock feathers. The V&A is primarily a museum of art and design, and many of the V&A’s musical instruments were acquired because of their beautiful decoration.

The eighteenth and nineteenth centuries were a period of great influence and exchange between the North Indian and the Persian musical traditions. This exchange also inspired cross-pollination of design and development of new instruments. During the 19th century, when the V&A’s collections were being formed, many new, hybrid and experimental types emerged. By collecting these and other more traditional but interesting examples, the Museum has been able to preserve them for posterity. Since the V&A’s instruments were made, the shape, size and design of some types has also changed, so that museum examples can record a particular stage in their evolution. 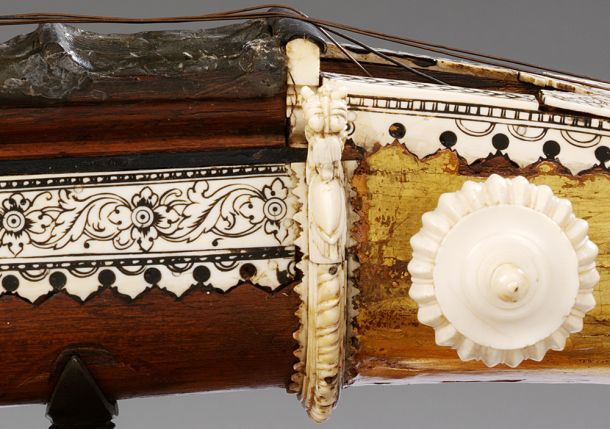 The India Museum in London, established by the East India Company, amassed a large group of Indian musical instruments during the 19th century, many of which were acquired in order to be shown in international exhibitions such as the Paris Universal Exhibitions of 1855 and1867. When the India Museum closed in 1879 its instruments were transferred along with a vast number of other objects to the South Kensington Museum, which was renamed Victoria and Albert Museum in 1899. These form a large part of the V&A’s collection.  The V&A also acquired many other instruments from leading musicologists of the day, notably Carl Engel and Raja Sir Sourindro Mohun Tagore.

The South Kensington Museum (now V&A) bought Carl Engel’s collection of 201 musical instruments from all over the world in 1882, including a large number from India. Carl Engel (1818-82), originally from Hannover in Germany, was one of the leading authorities in Europe on their history and development. He worked closely with the Museum and was the author of the Descriptive Catalogue of the Musical Instruments in the South Kensington Museum (1874).

Raja Sir Sourindro Mohun Tagore (1840-1914) was a notable ethnomusicologist and polymath from Kolkata who achieved international distinction and was awarded titles by several European sovereigns of his time as well as from the Shah of Persia. He did much to encourage the study of music and gave Indian musical instruments to museums across the world, including over one hundred examples given to the V&A in 1890. Most of these had been shown in the Colonial and Indian Exhibition held in London, 1886. It is likely that the majority were made to Tagore’s instructions, in order to be shown in exhibitions and museum displays. Several of these remarkable instruments are of an unusual or experimental nature. 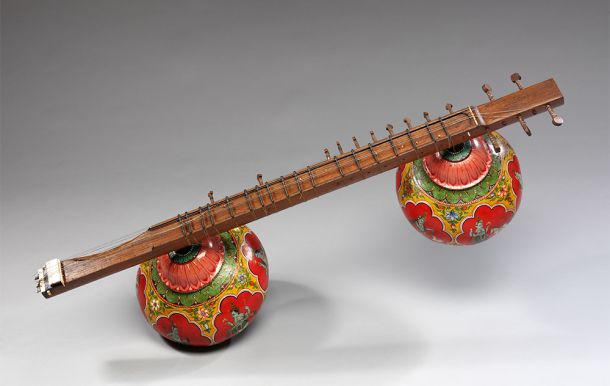 Major C. R. Day was the author of a pioneering book Music and Musical Instruments of South India and the Deccan, published in 1891. He lent eight interesting examples from India to the Royal College of Music in about 1892, which were transferred to the V&A in 1921. C. R. Day’s book includes notes on his own pieces besides mentioning others in the V&A.

The preservation and interpretation of Indian musical instruments at the V&A has benefitted immensely from the scholarship of Carl Engel, S. M. Tagore and C. R. Day. The beautifully-made instruments given by other individual donors such as Mrs R. Irvine and Mrs Biddulph are also valuable additions that greatly enhance the richness of this important collection. The Musical Wonders of India project aims to present a selection of the most interesting examples in fresh new ways and for the first time to juxtapose them with film of leading musicians showing how similar, modern instruments would be played. For the first time in over a century, one of the V&A’s instruments – a very rare Bin-Sitar (or Sitar Been) - will be restrung and played by one of India’s leading musicians, the maestro Ustad Bahauddin Dagar.