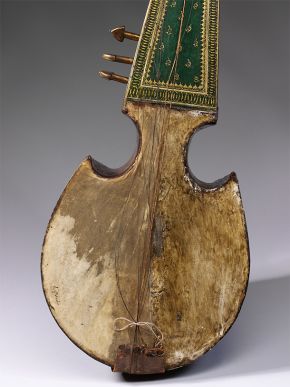 The sarod is played with a plectrum and is held in front of the body rather like a guitar with the wide end resting on the right thigh of the seated musician. It is very similar to the rabab from Afghanistan, from which it probably developed in the early 19th century, and it is also known as the rabab in the Punjab region, where the Afghan form was preferred. In 1891 the musicologist C. R. Day stated that the Indian rabab (or sarod) had a larger body with a proportionally wider lower section than the Afghan rabab. In the V&A’s 19th century records this example was described as a ‘shourd’, which if read as ‘shorud’ is similar to the Bengali pronunciation of ‘sarod’.

The sarod is quite a large instrument and has a deep, drum-like body carved out of one piece of hollowed wood with the neck ending in a downward curve, which is occasionally carved in the shape of a bird’s or a horse’s head, although this example is plain. The lower part of the body of the instrument is covered with parchment. 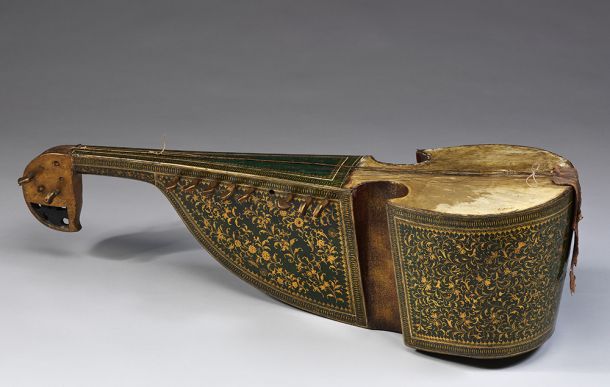 Numerous variations exist, but according to Day the rabab typically had four main strings, three of gut and one of brass. The two upper strings were sometimes doubled and tuned alike, in which case it has a total of six strings, as was the case with this sarod, although only two of the strings survive. They are attached to a leather strap, which has been affixed to the body of the instrument with a metal screw. It also has eight out of an original nine sympathetic wire strings that end at the smaller tuning pegs fixed along the side of the sarod.

This instrument with its beautiful gilded floral decoration is part of a very small group of similarly decorated instruments of different types preserved at the V&A and elsewhere. They were presumably made at the same workshop, probably in Varanasi in Uttar Pradesh, although another instrument in the collection with similar decoration is recorded as having coming from Patna. 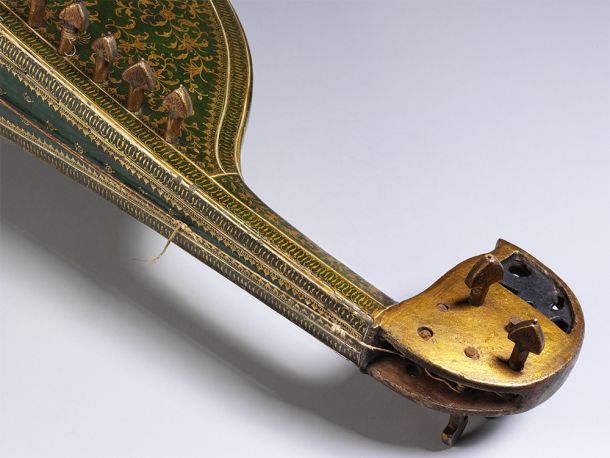 The Museum’s acquisition records indicate that this instrument was sent from Varanasi to the Paris Universal Exhibition of 1855. It joined the collections of the India Museum, London and was transferred to the South Kensington Museum (now the V&A) in 1879.