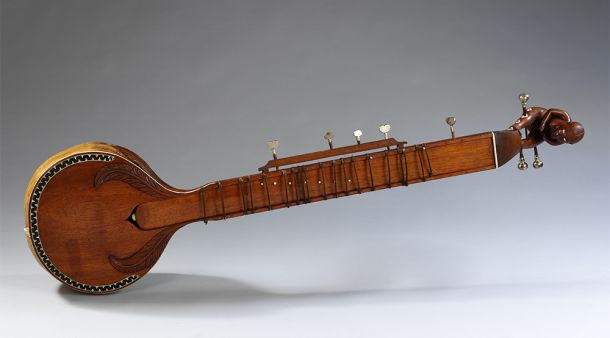 The term surbahar is Hindi and means a ‘springtime of musical notes’.

The surbahar is a type of large, bass sitar. Ghulam Muhammed Khan of Lucknow is credited with its invention around the year 1825. The surbahar was reportedly popularised in the nineteenth century by his son, Sajjad Hussain. The surbahar was a specialised instrument used only in performances of certain types of instrumental classical Indian music. While the popularity of the rudra vina or bin was fading towards the end of the nineteenth century, the surbahar was becoming more prominent, especially in Bengal. Because of its large size, however, C. R. Day reported in 1891 that it was tiring to play and expensive to buy.

A steel plectrum called mizrab is used to play the surbahar, which is held in front of the musician at an angle with its body by the musician’s hip and its neck pointing upwards.

A distinctive feature of this example is that the neck terminates in a carved naked human figure. The frets are movable and there were sympathetic strings in addition to the main ones. The body is formed of a large gourd with a carved and inlaid wooden cover. 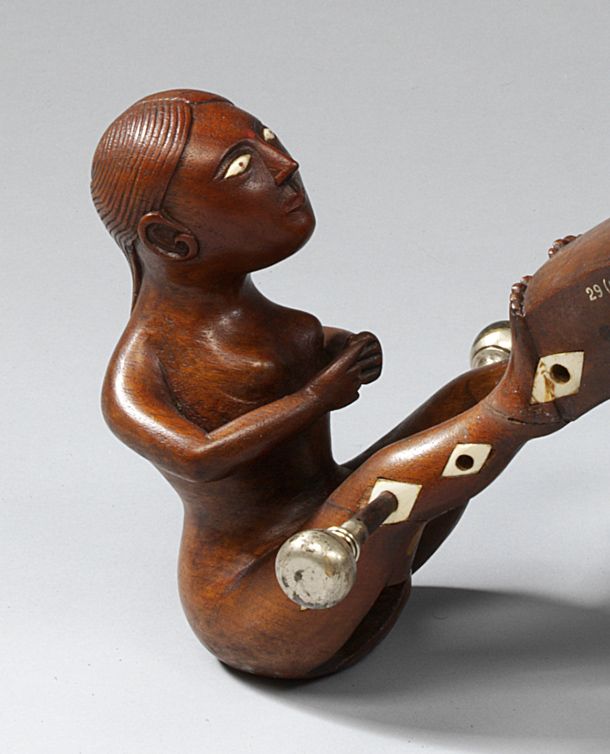 This instrument is from the collection given to the V&A in 1890 by Rajah Sir Sourindro Mohun Tagore, an ethnomusicologist who gave large numbers of Indian musical instruments to museums across the world. Some of the instruments he gave appear to have been selected partly for their visual interest, as with this unusually carved example.