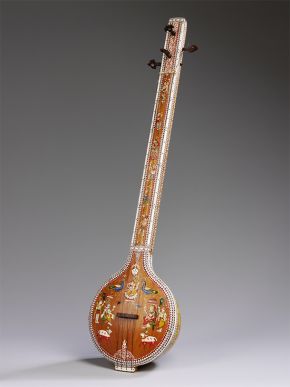 The tambura or tanpura is a plucked drone instrument used to accompany instrumental or vocal performances. The four strings are played open rather than being depressed to alter the note. This example is considerably smaller than the typical tambura. A very small version is sometimes known as a tamburi.

This example is so profusely decorated it may have been made for display or for use at court. The front of the sound chamber features images of the Hindu deities Ganesha, Rama, Sita, Hanuman and Lakshmana, along with peacocks and cows. The neck is decorated with figures of a male musician playing a pipe or horn, a female musician playing a drum, and acrobats, who appear to be climbing a very tall bamboo pole. One of the female acrobats has a number of matkas (earthenware pots) stacked upon her head. 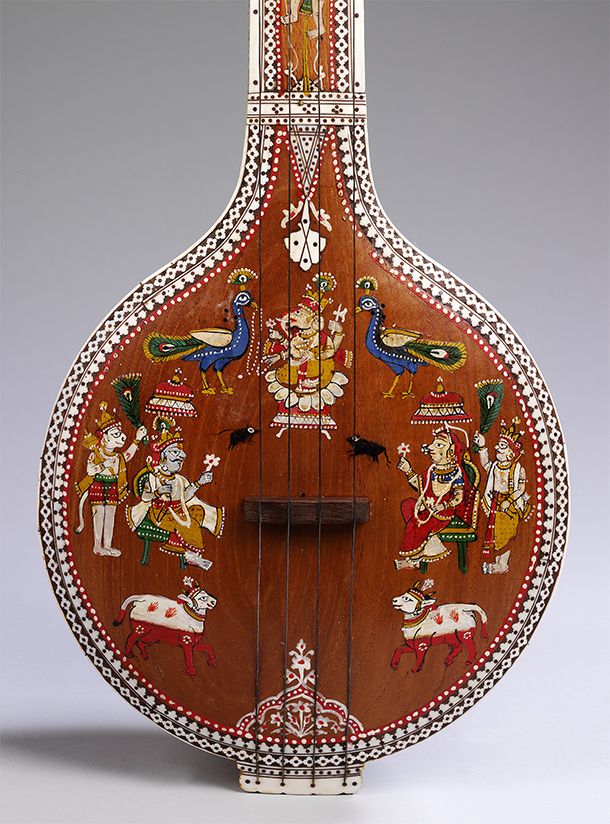 On the back, Krishna appears five times dancing with the gopis (cow-girls) in a circular pattern. They are flanked by four standing figures: the gods Shiva (holding his trident) and Brahma (shown with four heads and holding the vedas or sacred texts), and two rishis or great sages. The one standing below Brahma is Narada, who holds a vina, a musical instrument which he is said to have invented. He also wrote a treatise about music and was the chief of the gandharvas or heavenly musicians. 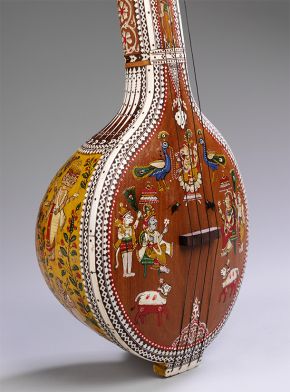 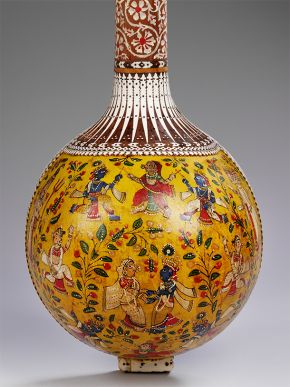 This tambura belongs to a small and fascinating group of similar tamburas, of which there are examples in museums around the world. However, most of these lack secure attribution records and the origins of the V&A instrument are something of a puzzle. The Museum’s records from 1922, when the object was acquired, state separately that it was from Pune, Maharashtra, and, slightly later, that it was probably made in Sipri (now Shivpuri), near Gwalior, Madhya Pradesh, although these places are very distant from each other. However, the fact that the sound chamber of the instrument is made of wood, rather than of gourd, suggests that it was made in the south of India as do other aspects of the shape of the instrument, and it has been suggested that the painting style can be linked with Mysore in the south. 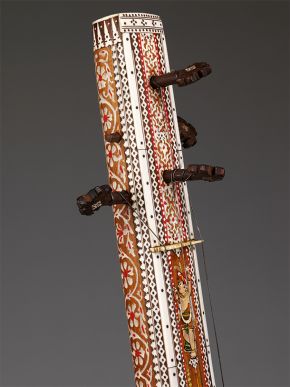 The instrument belonged to Colonel John Biddulph (1840-1922), who arrived in India in 1858. After serving in the Staff Corps and acting as Aide-de-Camp to the Viceroy Lord Northbrook (1872-6) his career included a secret mission to the region beyond Gilgit (now in north-west Pakistan) in 1877. He served as political agent and resident at several Indian courts including Gwalior (1892) and Baroda (1893) and reverted to military duty in 1895. The tambura was given to the V&A by Mrs Biddulph in accordance with the wishes of Colonel Biddulph, who also left a collection of Indian arms and armour to the Museum.