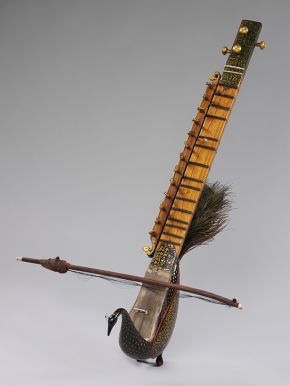 Taus means ‘peacock’ in Persian. Its Sanskrit name, mayuri vina, also reflects the fact that it is carved in the shape of a peacock. The taus is played with a bow and has moveable frets like the sitar. The lower end of the instrument stands on the floor supported by the carved peacock’s feet while the musician sits cross-legged; or, if the musician sits on a chair, it stands on his legs. The upper end rests on the musician’s left shoulder.

It is a large instrument and produces quite a loud, rich and reverberating sound with a relatively deep and mellow tone. The peacock’s body forms the sound chamber and there is a sound hole where the tail feathers are affixed. This example had four main strings and thirteen sympathetic strings. 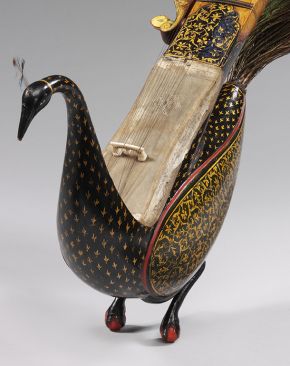 The taus emerged from the Punjab region in the early nineteenth century or earlier and became popular in northern and central India. It accompanied courtly nautch (dance) performances but it is also associated with Sikh devotional music. Many credit its invention to one of the great Sikh Gurus.

The taus, with its graceful peacock shape, lends itself to beautiful decoration, and this fine example is no exception. In addition to the elegant carving and paintwork, real peacock feathers are used to form the tail and crest of the bird. These would, however, have been very vulnerable to damage when in use.

This example was purchased from the German musicologist Carl Engel in 1882 along with many other instruments from all over the world.