Treasures of the Royal Courts: An Ambassadorial Procession in London 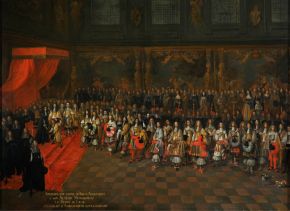 On the occasion of the restoration of the monarchy in 1660, royal and ambassadorial processions were rapturously received by the people. This film is based on contemporary paintings by François du Chastel recording such a procession. In the paintings, the Spanish ambassador, Claude-Lamoral, Prince de Ligne, disembarks at the Tower of London and progresses through the City towards Westminster for his audience with Charles II.

In the Banqueting House, Whitehall, the king stands to greet the ambassador while royal spaniels frolic in the foreground. Under Charles II, relations with Muscovy were also re-established. No depictions of Russian ambassadorial visits from the time exist, but these paintings gives us an idea of what they might have been like.

Video: An Ambassadorial Procession in London in September 1660

The Spanish ambassador, the Prince de Ligne, comes to London to present his congratulations to Charles II on his restoration.

On 24 September 1660, the ambassador’s procession assembles at the Tower of London.

The ambassador embarks at Tower Wharf.

The artist sketches the scene and his secretary records the events in a diary.

The church bells strike four o’clock in the afternoon.

Londoners, men, women and children, crowd at every window and on every roof top.

A barge with a gilded lion and dolphins delivers the ambassador from the king’s yacht nearby.

The ambassador is welcomed by an artillery salute.

The ambassador’s companions, dressed in livery of pink trimmed with yellow and silver, are led by the king’s officer.

Liveried trumpeters sound a fanfare from silver trumpets with silk banners painted with the ambassador’s coat of arms.

The ambassador is seated with English courtiers in the king’s coach, which is drawn by six white horses.

The lions in the Tower menagerie roar as they smell the horses and sense the excitement of the crowd.

In a separate ceremony three days later, the ambassador presents his credentials to Charles II.

The ambassador’s dress is heavy with embroidery.

His followers are dressed in flame coloured livery with yellow and silver trimmings.

Their hats are plumed with feathers.

They enter the Presence Chamber at the Banqueting House, Whitehall.

Charles II stands on a dais with a gold-trimmed red chair of state behind him to receive the ambassador and his young son.

The king is presented with a letter from the King of Spain.

English courtiers, men and women, crowd the hall and the galleries above.

The lower walls are hung with tapestries brought from Hampton Court Palace for the occasion.

The halberdiers keep the crowds at bay.

They are King Charles’s Cavalier spaniels, named after the monarch himself.