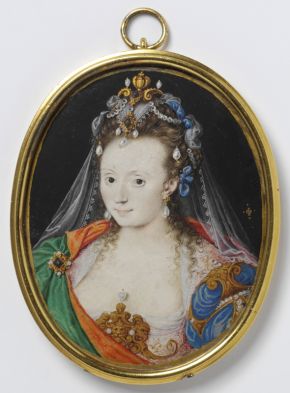 Portrait miniatures first appeared at the English court in the 1520s. Painted in watercolour on vellum (fine animal skin) these tiny portraits developed from the art of decorating handwritten religious books. Few miniatures survive from before the 1560s. Many of these surviving miniatures are of royal sitters and served as diplomatic and personal gifts. The art developed from the 1570s in the hands of Nicholas Hilliard, whose patrons included Elizabeth I and her courtiers, as well as wealthy London merchants.

Miniatures of royalty often played a part in marriage negotiations with foreign courts. They also had a domestic political role. Queen Elizabeth’s ambassadors often carried her portrait in miniature, which was much admired. James I understood the power of these tokens of loyalty, and miniatures of the Stuart royal family proliferated. At court miniature portraits of the king were given and worn as a mark of royal favour and the courtier’s loyalty. When James’s daughter, also Elizabeth, was exiled from Bohemia, miniatures served to broadcast her plight around Europe.

Miniatures were not only private tokens. ‘Cabinet’ miniature's would have been shown in a display case or hung in a small room (both called cabinets) along with other precious objects. The portrait above of a lady in masque costume was probably set in a locket. The court masques were a form of symbolic theatre in which James I’s queen, Anne of Denmark, and her ladies often took part. This sitter therefore publicly proclaims herself one of the queen’s intimate circle.

Miniatures were above all likenesses of beloved faces, even if framed by formal ruffs or obscure symbolism. The court encouraged a taste for emblems and mottoes. A black background symbolises constancy, while a Latin motto compares love to a rose, its bloom attracting while its thorns repel. Hilliard said miniatures should be ‘viewed... in hand near unto the eye’. Cradled gently, these were potent tokens of memory.

Fine animal skin was stuck to a playing card.

The back was rubbed hard with an animal tooth to ensure a smooth surface.

Pigments were mixed with water and gum.

The flesh colour, known as the carnation, was applied.

The facial features were outlined with a fine brush.

Any excess carnation was removed.

A special technique was used to paint the distinctive blue background.

A watery wash was followed by thicker paint.

Details of the costume were finely painted.

An inscription was sometimes added.

After they were painted, miniatures were normally cut into an oval shape.

This miniature shows Elizabeth I wearing elaborate jewels, such as rubies.

Creating rubies was a delicate process.

A hot needle was used to apply a layer of resin over silver.

The silver reflected light through the red resin.

A jewelled and enamelled locket was made for the Elizabeth I miniature.