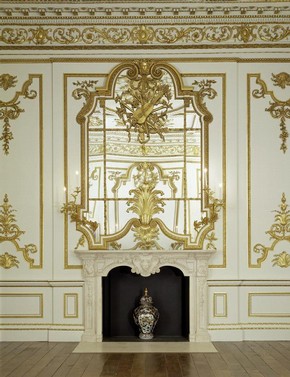 Norfolk House was located on the west side of St James's Square and was the London residence of the Dukes of Norfolk from 1722 until it was demolished in 1938. Its music room was one of the earliest examples of a room in a grand house specifically set aside for music. After 1938, the cream of the contents of Norfolk House was removed to Arundel Castle, Sussex, but the panelling from the Music Room and the doorways from the Great Room, decorated with carved monkeys, were acquired by the V&A.

The early years of Norfolk House

Between 1748 and 1756 Norfolk House was rebuilt for Edward Howard, 9th Duke of Norfolk (1686-1777), by Matthew Brettingham (1699-1769). Brettingham had been an assistant of William Kent (1685-1748), England's leading architect in the Palladian style. The interiors of Norfolk House were designed by Giovanni Battista Borra (1713-1770), an architect from Turin. Borra also provided illustrations to Robert Wood's Ruins of Palmyra (London, 1753), a survey of Roman antiquities in the ancient city of Palmyra, in central Syria, and he designed other interior schemes at Stowe and Stratfield Saye. At Norfolk House, his designs were executed between 1753 and 1757 by the carver Jean Antoine Cuenot and the plasterer Thomas Clarke.

As the leading Catholic family of England, the Norfolks were open to the influences of French and Italian styles but barred at that time from the expensive business of politics. This enabled them to accumulate wealth from their estates around Norwich, Sheffield and Arundel, and to indulge their tastes to the full. Their lack of influence in Parliament was more than compensated for by their social prominence. The 9th Duke was a friend of George II's son, Frederick, Prince of Wales. He sheltered the Prince in September 1737 after he had been expelled from St James's Palace, following a quarrel with his father. It was in Norfolk House that the Prince of Wales's son, later King George III, was born in May 1738.

The French influence on Norfolk House 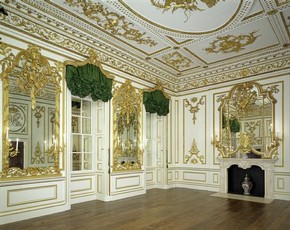 Mary, Duchess of Norfolk (d. 1773), was one of London's leading hostesses. After the decorations of Norfolk House had been completed, she gave a huge reception in February 1756. Horace Walpole remarked that 'there was all the company afraid of the Duchess, and the Duke afraid of all the company', but nevertheless he praised her gatherings as being 'wonderfully select and dignified'.

Duchess Mary was an ardent Catholic and lover of all things French. She hung the Great Room with four panels of Gobelins tapestry, which she had bought in Paris, for the then huge sum of £9 a yard. She also chose designers and craftsmen well-versed in French styles. In Turin, the native city of Borra, the designer of the interiors of Norfolk House, French fashions prevailed and French (rather than Italian) was the language of the court.

The family of Cuenot, the carver who executed Borra's designs at Norfolk House, came from Doubs, a town in Franche-Comté in eastern France. The Music Room was decorated like a contemporary salon in Paris, with white-painted walls, gilt carvings and enormous looking glasses.

The Music Room was in the North West corner of the state apartment of Norfolk House, which took up the whole of the first floor. Visitors could move through a series of reception rooms, arranged round the grand staircase. These included a State Bedroom, the Green Damask Room and the Great Room, where the tapestries were hung, as well as the Music Room.

Captain William Farrington attended the great reception in February 1756, and afterwards described the interiors in a letter to his sisters. The Music Room, he said, was 'wainscotted [panelled] in a whimsical Taste, the panels fill'd with extreme fine carvings, the Arts & Sciences all Gilt, as well as the same Ceiling, which was the same design'. This was where the Duchess 'sat, the whole night that she might speak to every one as they came in.'

Horace Walpole, who also attended, was suitably impressed: '…you never saw such a scene of magnificence and taste … [the] novelty of the ornaments and the ceilings, are delightful'.

The fashion for music rooms 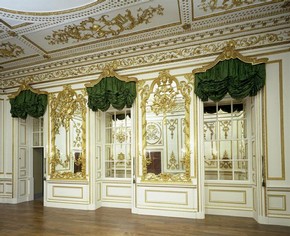 This Norfolk House Music Room is one of the earliest its kind in London. After about 1760, it became fashionable to create music rooms fitted with chamber organs. Robert Adam (1728-1792) made such designs for Lord Scarsdale in Kedleston, in Derbyshire in 1764-5 and Sir Watkin Williams Wynn at 20 St James' Square, London in 1775. James Wyatt (1746-1813) did likewise at Powderham Castle (1794-96), in Devon, and Heaton Hall (1772- 778), near Manchester. The Heaton Hall organ is still in its original setting.

Music rooms were often decorated with instruments, muses and medallion portraits of George Fridric Handel (1685-1759), the German composer regarded at that time as an honorary Englishman. The Norfolk House Music Room contains no organ but its purpose is indicated by the carved trophies on the walls, mirrors and ceilings. These are mostly decorative fantasies, based on engraved designs by Jacques-François Blondel (1705-1774). However, they include fairly accurate representations of contemporary violin bows, the Baroque guitar, and a cornemuse (the courtly French version of the bagpipes). The cornemuse, aFrench type of bagpipe,was a common feature on musical trophies found on marquetry decorations on French furniture, but not so well known in Britain outside Francophile circles.

The playing of music in music rooms

How far music rooms were actually used for playing music is uncertain. Being able to play instruments well was admired in ladies but less so in gentlemen and considered best left to professionals. However, hiring them to play in such fine settings was the mark of a good host. At Norfolk House, no musical instruments are mentioned in the inventories of 1756 and 1777, and it would seem that they only appeared when musicians came to play. However, the name of the room and the lavishly carved musical trophies suggest that it really was intended for music as well as card games and general social intercourse. 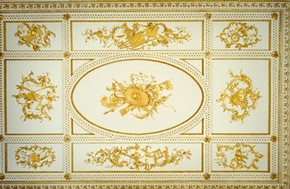 The State Apartments, which included the Music Room, were subject to various campaigns of refurbishment from about 1815 until the early 1900s. In 1819 George Stuart was paid over £2,000 for unspecified 'Carving and Gilding', and by November 1820, Thomas Creevey, a friend of the 12th Duke, described Norfolk House as 'a capital magnificent shop'.

The fashionable decorating firm of George Morant painted and regilded the State Apartments of Norfolk House, between 1842 and 1843 and again between 1859 and 1860. Charles Nosotti's work of 1869 included extensive repairs to the mirrors of the Music Room. Throughout this whole period, the emphasis was more on cleaning, regilding and repairing rather than any radical alterations.

The final years of Norfolk House

Following the death of the 15th Duke in 1917, Norfolk House was let to the Royal Ladies Overseas Club until 1924 and then to a private tenant, Mrs Harry Brown. In 1937, it was sold to Rudolph Palumbo and demolished the next year, following the pattern of many other aristocratic London Town Houses during the 1920s and 1930s. However, the magnificent panelling that made up the Music Room was saved, and it serves as a reminder of a distant, elegant age, when Music and Music Rooms formed an important part of the hospitality of the nobility.