One of the largest ever retrospective exhibitions of the work of Frank Lloyd Wright was held in Japan during the first seven months of this year. Nearly fifty different museums, institutions, galleries and private collectors contributed to the exhibition which was seen in four Japanese cities - Tokyo, Kyoto, Yokohama and Kitakyushu. On display were architectural drawings and models, original sketches, furniture and fittings for houses and parts of buildings. Also included were two video films; one featured an interview with Wright himself, the other was a fascinating insight into the construction of Fallingwater, perhaps his most well known commission, and an interview with its owner, Edgar Kaufmann. 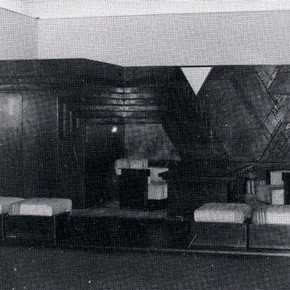 Japan was a fitting venue for such an exhibition. Wright was already an established collector of ukiyo-e prints when he first visited Japan in 1905 and was to organise two important exhibitions of ukiyo-e in Chicago in the early years of the century. Despite Wright's fame and prolific output as an architect, there was a long and relatively inactive period in his career from 1911 to 1936. During this time he worked on a number of buildings in Japan including the famous Imperial Hotel in Tokyo. Part of the purpose of this exhibition was to reassess the relationship between Wright's work and Japan.

One of the focal points of the exhibition was a room complete with its original furniture and textiles on loan from the V&A. The room dates from 1937 and was designed as an office for the Kaufmann department store in Pittsburgh. Kaufmann gave the room to the Museum in 1974 on the understanding that it would be on permanent display. It was displayed briefly, but not in its entirety, when it was first acquired. The Japanese loan request generated enough income to conserve the room and its textiles, and to build the supporting structure needed for its display in Japan. This structure will be reused when the room is exhibited in the V&A. Thus the loan has acted as a catalyst which will ensure that Kaufmann's wishes are fulfilled. Permanent exhibition space has been found in the Henry Cole wing and the room will be on display from mid 1992.

The complete room (Figure 1) presents a complex and ambitious loan, particularly for a multi-venue exhibition. The room had to be dismantled and reassembled five times. Detailed instructions illustrated with photographs were prepared by the Joiners and the Furniture Conservation Section. Each part of the room was numbered in sequence. The shaped carpet at the back of the room was also problematic. It had to be skilfully manoeuvred under the desk from its roller on assembly and the whole process reversed when the room was packed. This, too, required detailed instructions and drawings. Christopher Wilk, Curator of Furniture and Woodwork Collection, supervised the first installation in Tokyo at the end of 1990. A professional Japanese object handling team was employed for the duration of the loan and all operations were co-ordinated by Shinji Kohmoto, curator at the Museum of Modern Art in Kyoto, who accompanied the loan as it travelled to each successive venue.

A point half-way through the loan was considered the most sensible time for a second courier to check the condition of the room and its contents and to supervise its dismantling and packing. I arrived in Kyoto a few days before the exhibition was due to close which gave me enough time to examine everything in detail. There were several sets of upholstery covers for the chairs, stools and banquette in the complete room. A selection of the originals (woven in the 1930's) and some later reproductions (woven in the 1950's) were used for the loan. Some of these covers were identical and their museum numbers were totally inaccessible once they were fitted to the upholstery. I could only identify them through stains and marks noted on the condition reports. Perhaps this is a point to be considered for future loans. In general I found the current condition report form unsatisfactory for this type of loan. There needs to be provision for comments on condition at each venue. The names of the venues could be entered on the form before the loan leaves the V&A so that the importance of recording an inspection at each point in the loan is made clear. The Conservation Documentation Section is currently working to improve the format and content of loan condition reports.

Both the room and its contents appeared unchanged in condition except for one stool. The veneer at the base of the stool was splitting and likely to deteriorate further without immediate conservation. This weakness had been noted on the condition report but handling, packing and unpacking had taken their toll. A Japanese conservator was consulted and suggested a temporary repair with rice starch adhesive, enough to ensure the safety of the object for the rest of the exhibition, but easily reversible on return. The whole process was documented with Polaroid photographs. 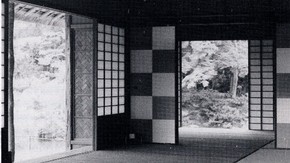 Figure 2. Part of Katsura Imperial Palace. The interior and exterior are one concept (click image for larger version)

The packing of the carpet went well; the Japanese team were expert by this point in the loan at the difficult manoeuvre needed to release it from its position under the desk. They were also expert at rolling (poor rolling is known as 'baby bamboo' in Japan) but needed some supervision on handling. Mr. Kohmoto told me that they had found the installation of the room difficult at first but they were clearly expert by the time the loan was dismantled in Kyoto. I was impressed by the speed and professionalism of the team.

The Museum of Modern Art in Kyoto has a superb temporary exhibition area. The whole space is flexible and can be used for very large exhibitions or for much smaller ones. Extra cases were revealed behind the sliding panels which had been used for displaying Wright's architectural drawings. Movement of objects into the area is simplified by a goods lift which is about eight metres wide. Over four thousand visitors a day saw this exhibition in Kyoto, a measure of the interest of modern Japan in Wright's work.

Much has been written about the influence of Japanese art on Wright's work particularly in his concept of space and in the balance he created between his buildings and their natural surroundings. This connection became very clear to me when I visited the 17th century Imperial Palaces of Katsura and Shugakuin. Here, amongst exquisite gardens, were beautiful examples of Japanese architecture. The harmonious relationship between the interiors of these buildings, their outer form and the landscape is an element which is integral to Wright's work.