When I first examined the large metal head of a Buddha several years ago, it was displayed amongst European works of art and simply looked like a rather quaint old oriental curiosity. It had been identified as being made of iron and labelled as belonging to the Ming dynasty (1368-1644 AD), merely because most other cast iron sculptures of this type had also been dated to the Ming dynasty. 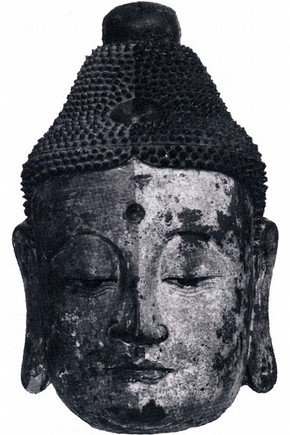 The surface of the sculpture was covered with a very deteriorated layer of paint, and this was stained to a dark brown by a varnish that covered the whole head. The surface condition was so fragile that the head could not be moved to the Sculpture studio for further examination without first 'facing-up' many of the friable areas with Eltoline tissue and poly (vinyl alcohol).

Once in the studio, some preliminary testcleaning of the varnish layer was undertaken. It was found that the most effective cleaning agent was acetone applied on cotton wool swabs. With the varnish removed (Figure.1) a layer of bright pink paint was revealed. Given the signs of iron corrosion on the surface of the metal, it was surprising how much paint was left attached to the surface.

At this stage a number of pigment samples were taken by Josephine Darrah of the Science Section, and examined with an optical microscope at xlOO - x170 magnification. Further cleaning on the sculpture revealed that more than one paint layer existed. In fact the scheme of layers on the flesh areas appeared as below:

As the head had clearly been subject to repainting at some time in the past, we looked for means of dating it by other than stylistic methods. The head had originally been cast as a hollow shell of metal some 4mm thick, the cast marks (or fettles) had been removed. Examination of the interior showed that there were still considerable remains of clay core in place suggesting that the sculpture had been cast by the 'lost wax' method. A sample piece of this clay core was taken and sent for thermoluminescence analysis to the Research Laboratory for Archaeology and the History of Art, Oxford University. Because the clay had been heated during the casting process it was possible, by this method, to pinpoint the date of firing.

The results of the analysis showed that the casting of the head had taken place in the 7th or 8th century AD, and this placed it firmly in the Tang dynasty (618-906 AD). The sculpture was therefore of an earlier date than had been previously thought and this suggested that the traditional dating for other sculptures of this type might well be incorrect.

The early dating of the head also tied in with our findings from the examination of the paint layers. The thick layer of paint that we found under the top coating of paint and gesso was found to be composed of linen fibres. Whilst in Japan I had the opportunity to discuss this information with paper conservators who told me that the Chinese had ceased using linen for paper-making during the twelfth century. This clearly indicated that the restoration layer was of an early date and this confirmed the Tang dating for the original manufacture and painting of the head.

Further analysis of the paint layers showed that the pigments used for the flesh were white and red lead and that the gesso ground was composed of kaolin. Raymond White, of the Scientific Department of the National Gallery, had undertaken medium analysis of both the original and the restoration layers and found that the binding medium in both cases was Chinese lacquer.

The use of paper for restoring damaged paint surfaces is a common oriental technique. Usually, the restorer pastes paper over the damaged surface using glue size as an adhesive and then covers the paper with gesso and applies his paint onto the new ground. 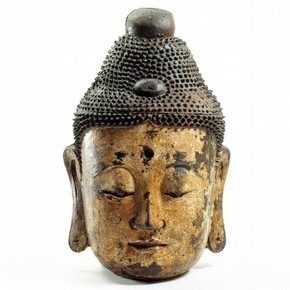 We had all assumed that the metal of which the head was composed was in fact iron, for the surface showed clear signs of iron corrosion and rust-staining. To make some
initial analysis of the metal composition we used energy-dispersive x-ray fluorescence spectroscopy (EDXRF). The readings taken from the surface of the metal did show a strong presence of iron but surprisingly significant quantities of copper as well. Further examination of other areas
produced similar results and suggested that the head might contain a mixture of metals.

A fragment of metal was removed from the sculpture and taken to the Royal Armouries at the Tower of London for cross-section analysis. The result of this analysis proved very interesting: it showed that the main component in the metal was a leaded copper with a little tin and a lot of iron. In effect the sculpture was a copper bronze cast which had iron included in it and it was this iron which was corroding on the surface of the sculpture, producing the impression of decaying cast-iron.

Given all this information it was now possible to formulate a treatment for the sculpture. Although there was visible evidence of the corrosion in the metal, it was in remarkably good condition, given its age. The metal showed no sign of powdering, splitting or flaking, and could be touched without loss. The paint layers also were generally firmly fixed and flaking was only occurring in localised areas.

Under magnification one could see that the surface of the metal was extremely porous and resembled a very porous limestone in character. Given the absorbency of the metal, and the need to protect the metal against the ingress of moisture vapour, we felt that some of the materials that we had used for many years for stone consolidation might prove effective in this case. The penetrating qualities of silanes, their hydrophobic nature and great stability made them suitable materials for this treatment.

We tried a number of formulations and tested them for penetration, strength of consolidation, lack of gloss, thermoplasticity and their effect on colours. The resins used were as follows:

Of all these solutions the last (no.5) proved the most suitable and we decided to use this for the full consolidation of the head. The technique we adopted was to apply the consolidant either with a pipette or a fine sable-hair brush whilst scanning the surface through a microscope (x10-x20). The resin softened the overpaint layers whilst it was drying allowing the careful removal of the twelfth century layers from those of the Tang. When dry the consolidant, due to its acrylic component, could be softened with a heated spatula thus allowing the paint and gesso to be ironed down to the metal. 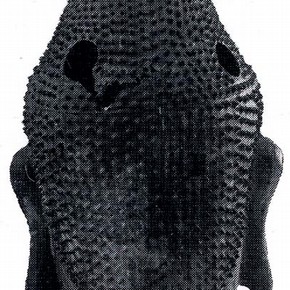 Figure 3. The back of the head after conservation (click image for larger version)

Aesthetically we took a very archaeological view of the question of making good losses on the surface. We felt that it was so rare for original paint to remain on an object of this date and type that we should reveal the original wherever possible and not obscure it by modern repainting. Once the paint was cleaned and secured, it (and the metal) were coated with a varnish of Paraloid B72 and Cosmolloid wax dissolved in white spirit and toluene. On top of this some light re-integration was undertaken using Rowney's Cryla colours (Figure.2).

Although we had recorded our analysis and treatment thoroughly we felt that we should leave some traces of the overpaint layers on the sculpture for future conservators to examine and analyse. To this end a large section at the back of the neck was uncleaned and untreated (Figure.3).

The head is now installed in the centre of the new Tsui Gallery and it is secure in a glass case. The head has been displayed at some height from the ground to give an impression of its original height. When first made, it would have been part of a colossal figure of Buddha standing some six metres tall and, sadly, now we can only imagine how splendid the whole sculpture looked when it was completely painted and gilded.