The Raphael cartoons for the Vatican tapestries: conservation treatments past & proposed 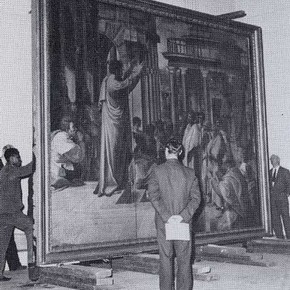 Fig 1. Removing a Cartoon from the wall in 1965 (the mastic joins between the three plates of glass can be seen) (click image for larger version)

The acceptance, in 1865, of seven designs for tapestries by Raphael was an important land-mark in the Museum's history. The Cartoons, large paintings on paper mounted on canvas, came to the then South Kensington Museum as a loan from Queen Victoria and have retained the status of royal loan to this day. Their great importance as irreplaceable examples of Renaissance art and Raphael's genius is unquestionable, but for the last 127 years the task of protecting and conserving the Cartoons (the smallest of which is 11' by 17') has been a formidable one. The current re-roofin and refurbishment of the Raphael Cartoon Court has once more raised questions about their condition and their future.

In 1515 Raphael was commissioned by Pope Leo X to paint ten cartoons (three are lost). They were completed by 1516. In 1620 they were discovered by Rubens in a drawer in Arras and purchased by Sir Charles Crane for Prince Charles (later Charles I). After the execution of Charles they were purchased by Oliver Cromwell and later by William III. By the time they reached this Museum they had been displayed at Hampton Court Palace, Whitehall, Buckingham Palace, and actually folded in half for traveling loans to places like The British Institute. In 1858 a letter was sent to Henry Cole, the Museum's first director, proposing the loan. It was not until 1865 that the final decision was made to house them in the 'fireproof galleries' of the South Kensington Museum for greater public exposure. 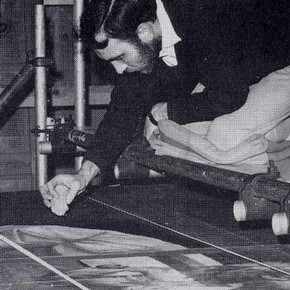 Fig 2. Jim Murrell removing the remains of pulverised vinyl eraser, used for the surface cleaning of the Cartoons (click image for larger version)

At the end of the 17th century the Cartoons were lined onto a secondary support canvas, attached to their present stretchers and restored by Henry Cooke (a decorative painter). The gilded frames were made specially for the Cartoons on their transfer from Hampton Court to Buckingham Palace in 1763.

In 1865 there were suggestions to preserve the Cartoons between glass sheets sealed with gelatine to eliminate dust and pollution. There was also a suggestion of introducing zinc boxes containing quicklime to prevent moisture build-up behind each Cartoon and absorb 'mischievous vapours.'

Although there is some evidence of an attempt in 1874 to clean the paint surfaces, the next well-recorded examination of the cartoons was in 1891 when H M Stationery Office produced a report on Housing of the Raffaelle (sic) Cartoons, by Professor A H Church. His findings were that the secondary canvas support was in a strongly acid state; similarly the American cloth backing.

Pigment analysis by Dr Russell verified that Henry Cooke had used identical pigments to Raphael in his restorations. He concluded that, although some of the original colour had faded (particularly the crimson), the rate of fading generally had diminished. 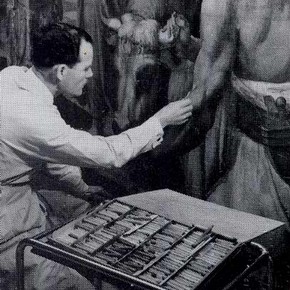 Daily measurements of moisture content of both canvas and paper showed it to be constant at around 7%. The medium used was thought to be yolk of egg although later analysis showed it to be animal glue size.

Suggestions were made to administer 'barium hydrate in spirits of wine' to neutralise acidity in the canvas and to destroy any micro-organisms present. Treatments with paraffin wax were recommended to reduce hygroscopic expansion of the canvas. There is no evidence that either treatment was carried out.

In 1893 white linen blinds were purchased to be drawn during 'daylight' hours. Photographs were also taken at this point, prior to returning the Cartoons to their respective frames.
During 1894 a request was received from 'The paintings and Drawing Preservation Syndicate Limited' that the Cartoons be placed in their hands for sealing into a vacuum system for 'indefinite preservation'. The request was denied. The same group successfully encapsulated the Museum's painting of Venice by Turner.

The use of fire-proof blinds on rollers was suggested in 1912 and a plan to protect the backs of the frames with asbestos blankets was costed at £156 per frame. 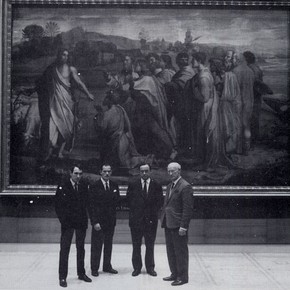 Fig 4. The completion of the conservation and the rehanging of the Cartoons in 1966 (L-R: Jim Murrell, Harry Rogers, Norman Brommelle and H A D Clark) (click image for larger version)

A year later the gallery they were displayed in (currently used for housing tapestries) was scheduled for redecoration and new proposals were put forward:

In February 1915 Sir Charles Church recommended that the Cartoons be sloped forward to avoid dust adherence to the surfaces, and that the rotting edges of canvas be bound. Also the Cartoons were housed in wooden boxes with hanging mattresses of silicate slagwool to protect them from possible bomb damage.

Very little is recorded during the next nine years until April 1924 when cleaning was carried out by G S Rowlands, (foreman), H Wilson and W Cave. In April 1929 the Cartoons were once again removed, primarily to re-seal the gaps between the glazing material by coating the fish glue already present with a layer of India rubber onto both sides. Some conservation work was also achieved at this time in the form of re-attaching loose areas of paper support. 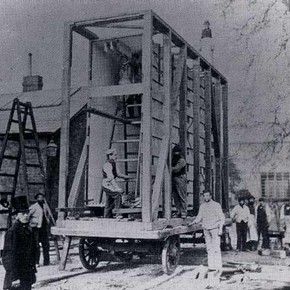 Fig 5. Object handlers of the 1860s under the direction of Captain Fowkes (click image for larger version)

It was at this time that Martin Hardie, Director, once more considered replacing the three-piece glazing system with one-piece polished British plate at a cost of £450 (per sheet, 2% of the 1992 estimate) but the task was again abandoned.

In November 1933 the cartoons of Elyntas and Death of Ananias were found to have areas of damage around their edges, and strip lining was mentioned as a remedy. On the recommendation of the Director, Eric Maclagan, Picelin (a black wax-like substance) and 'Bateman's Cement' were tried as adhesives, but previous experience had shown that any wax preparations could easily penetrate the structure and stain the paper layers.

During 1934-35 strip lining of all the Cartoons - except for Sacrifice at Lystra - using glue and paste (rice starch) with formalin, was carried out by Horace Clark and Basil Long of the 'Art Workroom' (forerunner of the Conservation Department). It was during this operation that a double layer of paper was discovered lying between the old and new canvas backings.

During the strip lining process, some surface cleaning with soft chamois was attempted, plus several different treatments - all recorded. Nothing further was carried out until the advent of the Second World War, when a brick-built shelter was constructed to protect the Cartoons. 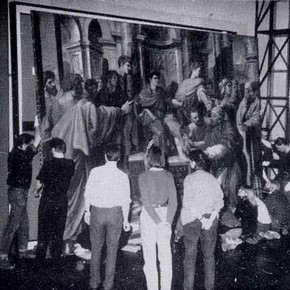 Fig 6. 'Paul Preaching at Athens' is placed into its travelling frame, 1992 (click image for larger version)

In August 1950 correspondence between Sir Leigh Hunt and Sir Anthony Blunt stimulated an interest in transferring the Cartoons to the West Hall (Room 48), the present gallery. It was not until 1964, when there were plans for the complete renovation of Room 48, that under the direction of Norman Brommelle (then Keeper of Conservation), greater efforts to improve the care of the Cartoons came with the long-awaited modern approaches to conservation.

Many of the long-standing problems were resolved, such as better control of penetration by pollution using carbon filters and control of daylight with automatic blinds. The old greenish plate glass was replaced with single sheets of water white polished plate.

Improvements to the Cartoons themselves were achieved by careful surface cleaning and repair of tears, and laying of loose or flaking paper and paint. Many of the old repaints and in-fillings, which did not match the surrounding original, were removed and those which could not be safely removed were disguised. Retouching of losses was done in pastel, considered to be reversible. The selected range of permanent pastel colours was specially prepared by George Rowney and Company Limited, as compressed sticks of dry pigment with little binding media.

At this time Norman Brommelle enlisted the aid of the National Gallery's Scientific Department to examine the Cartoons before and during treatment. This allowed them to take a limited number of samples for microscopic examination and chemical analysis from edges of existing damages and losses. The results of these tests were finally published in 1990 by Princeton University Press. 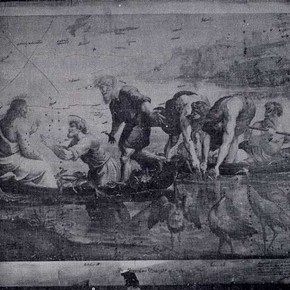 Fig 7. Print taken from a glass plate negative with remarks on condition by Richard Redgrave (click image for larger version)

Recent meetings to discuss the design of the gallery and the treatment of the Cartoons would have been depressingly familiar to previous generations of Museum staff. However, it is obvious that past conservation treatments to the Cartoons have, to some extent, been controlled by immediate needs, and depended on the available expertise. It is intended to develop a clearer picture of their overall condition and, ultimately, create and record an individual picture of each Cartoon.

The non-destructive methods available to us are X-ray, infra-red and ultra-violet which, combined with raking and transmitted light photography, will enable us to chart and map their present state. Magnification of the surface with a fibre-optic video microscope, and carbon-dating of existing samples of original canvas, should give positive guidance to immediate treatments or a possible basis for future conservation programmes.

The estimated time of six to eight weeks per painting should enable us to complete the programme within a year and, hopefully, produce the results in a further article soon afterwards.