Working with students on collection condition surveys at Blythe House

It had been my wish for a long time to survey the Theatre Museum's paper objects. There were a number of reasons for this: I was keen to come up with some facts to support what was generally considered to be true - namely that the need for conservation was acute. But on what scale was this need? I also knew that a portion of the collection was out of bounds to the public due to the poor condition of the objects. What proportion of these could not be handled at all? Finally, this spring, the Theatre Museum was collecting information about the state of the collections in order to write its five-year strategic plan. This seemed to be an ideal time to make an assessment of condition from the conservator's point of view, which could contribute to the information gathering enterprise. 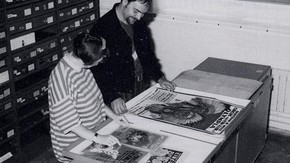 For each of the two years that I have worked in the V&A I have organised a small group of conservation students to experience working in the Museum. Camberwell College of Art offers a three-year BA in Paper Conservation. This year, as a result of the conversion of the BTec Diploma into a BA, there are twenty-eight students in the first year, all of whom need to experience working in a real conservation situation at some point in their Camberwell career. I considered the logistics of doing any kind of hands-on work with such a large group on the South Kensington site insurmountable, but undertaking a survey seemed feasible and Blythe House, one of our off-site Museum stores, would be the ideal location.

Blythe House formerly housed the New Post Office Savings Bank which opened in 1903 - a state-of-the-art office building which accommodated 4,000 people employed to handle the annual 15,000,000 deposits and 6,000,000 withdrawals. In 1984 it was converted to use as a store to be shared by three national museums, the Science Museum, the British Museum and the Victoria and Albert Museum. The Theatre Museum, part of the V&A, which had moved to cramped premises at Covent Garden, transferred the major part of its collection to Blythe House in 1988. The rooms are extremely spacious and pleasant to work in.

Before attempting such a project, two things had to be considered: What would the students get out of it? and moreover, as Cathy Haille, Subjects Specialist at the Theatre Museum, put it, 'What was in it for the Theatre Museum?' The answers to the first question were easy; the students, who during their time at Camberwell would learn to approach objects one at a time, would gain some experience of dealing with collections on the scale of those at the V&A. Moreover, I wanted to counteract the preconception on the part of the bright-eyed and bushy-tailed that everything can be conserved (or needs to be, for that matter). Finally, students would also undoubtedly benefit from the experience of coming into contact with such a wide range of objects and they could build on the excellent training in handling which they had already received at Camberwell.

The answers to the second question were more elusive. I was fairly certain that the information we would gain from a random sample consisting of a certain percentage of objects in the collection would not only give us specific information about a few objects but also a general overview of the condition of the whole collection. This information could be used by the Museum in long-term conservation planning. But, I think the Theatre Museum would have been more keen on the idea if it had felt that it was getting some real (ie, practical) work done instead of ending up with more numbers to crunch.

For all of these reasons I considered the endeavour as a combination of teaching and getting work done. On the practical side there are a number of points to remember for anyone wishing to work at Blythe House with student groups; arranging access to Blythe House (the security team there like to be warned well in advance of large groups planning to work in the building) and bringing everything you need from survey forms, pencils, and clipboards, to coffee and biscuits for breaks (once you are inside the recesses of the building it is no simple matter to dash out for a forgotten eraser!)

In consultation with the Theatre Museum it was decided that the students would be divided into four groups of seven and they would work with me at Blythe House over a period of four weeks (each group for two days). This arrangement seemed the best on three counts; it would minimise disruption to course work as well as to work in the Paper Conservation studio, while having the added advantage of reducing the chances of boredom setting in. (In practice, we have found that two days of such repetitive work is just about the limit before boredom begins to alter perception of condition grades.) These groups were further subdivided to work in pairs. 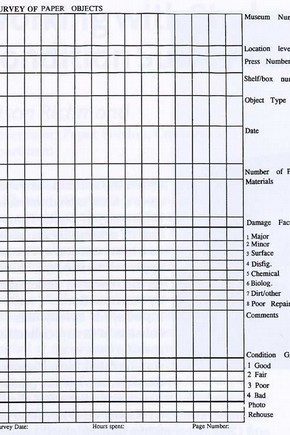 When the students arrived I gave a brief introduction to the history of Blythe House and its present incarnation as a museum store. The new approach to surveys, based on the research undertaken by Suzanne Keene1,2 was introduced. Briefly, this consists of firstly, collecting specific data in a standardised form (types of damage, eg, major, minor, surface, chemical, etc, and allocation of a condition grade, C1=Good, C2=Fair, C3=Poor and C4=Unacceptable, to each object) and secondly, advocates the use of sampling, in which only a proportion of objects in the collection is examined, rather than every object. A table of damage types and the agreed definitions of condition grades were handed out. We found having this information available for consultation at all times invaluable when making decisions and it contributed greatly to achieving a consensus of opinion. The aim is that these damage types and condition grades can be used on a museum-wide basis making comparisons between collections of all kinds possible.

The purpose of the survey was not only to assess the condition of the collection but also to discover the main causes of deterioration with the aim of making recommendations to rectify them. Because of the wide range of object types, e.g. costume and set designs, posters, sketchbooks, typescripts, toy theatre sheets, etc, and the way the collections were organised (Design and Archive collections are identified by the name under which they were originally acquired), we decided to sample 3% to 40% of each collection depending on the estimated size and variability of type and condition. (The basic principle is the greater the variability the greater the number of objects which need to be looked at. This sample was estimated as we were not yet in possession of the software which allows you to calculate the size of a representative sample.)

What did we achieve? In terms of information gathered for the use of the Theatre Museum we have produced a picture of the overall condition of the collections. However, I am not sure how much we can rely on the figures themselves as I think there is always an element of subjectivity involved in deciding on condition grades. (For example, we could not get the same figures repeated by different groups of students working on the same collections. But this phenomenon needs more testing.) We have identified at least some of the objects in the four condition categories and have ascertained the causes of deterioration to be, in the main, handling and poor housing. In just over 250 person/hours we recorded information on just under 2000 objects. This represents approximately 5% of the estimated total of 35,000 objects. The black spots have been located, (e.g. boxes of rolled tracings, binders full of newspaper clippings, etc.) and as a result we can make general recommendations for housing improvements and handling restrictions, prioritising collections for attention when the resources become available.

How did the students fare? They learned more about collections management than about conservation, e.g. the need for cataloguing, location lists, good storage, etc. This experience could be useful as many of these students may have a future in collections management. Most gratifying to me was the recognition on their part of the fact that handling causes damage to vulnerable objects. It was their suggestion that it would be better to combine a survey with housing activities, such as interleaving, in order to avoid handling the same objects twice. The last question to be answered was: did the students enjoy the experience? If the number asking to come back to work in the Museum is anything to go by, then the answer is yes!