Preventive conservation is now, justifiably, taking a much higher profile in the day to day running of many museums and other similar institutions. Recent interests in preventive conservation include an international three day symposium hosted by ARAAFU in Paris.1  The content of this and similar meetings has been directed towards finding acceptable solutions to complex problems. This contribution traces the implementation of such preventive solutions to complex environmental problems in the recently opened Twentieth Century Gallery (rooms 70-74) at the V&A.

The display in this new gallery contains many examples of ephemeral materials used in art and design. These materials are subject to degradation by several factors among which light and ultra-violet radiation play an important role. One problem of this display was the many square metres of glazing, subjecting the gallery space to high solar illumination, high uv levels and considerable solar heat gain. In addition, a design requirement was that the visiting public should still be able to retain some visual contact with the view through the windows. 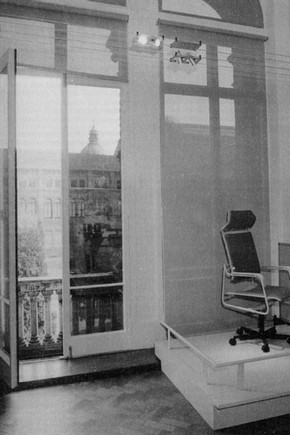 The Conservation Department first became involved with the gallery project in March 1992, by which time the budget and several other design parameters had already been
established. Examination of rooms 70-73 (the group of rooms with east-facing windows) before development suggested three principal areas of concern: light, heat and dirt. The environmental conditions required for the gallery can be summarised as;

In addition the brief from English Heritage was that the view of the windows from the exterior of the building must not be distorted.

All objects in rooms 70-73 would be enclosed in new Glasbau Hahn cases, except for the furniture, which was to remain on open display. Logistically, it would be difficult to put the furniture elsewhere than on plinths adjacent to the outside wall. In addition, the design required that;

A large proportion of the outside wall is glass. This leads to the possibility of high levels of illumination due to natural light, direct sun penetration during the early hours of the day and undesirable, uncontrolled heating by the sun. However, furniture, to be displayed on plinths in window spaces, was not to be exposed to average light levels in excess of 250 lux and highly light sensitive material was to be displayed at 50 lux. The solution to this problem depended in part on the unquantified need to reduce solar gain in order to avoid excessive temperature fluctuations in the window spaces. Historical environmental records for the gallery were not available though some data were collected during April, May and June. Use of a uv screening film and a grey fabric blind had been proposed but light readings taken in the gallery showed that this would not provide adequate control of illuminance.

Preliminary measurement of light levels in the gallery suggested that illuminance would need to be controlled to less than 1% of incident light. Small samples of dark sputtered titanium grey film were obtained from Sun-X2  and tested in the gallery and in the laboratory to assess their efficacy. This type of film was chosen as it does not introduce metameric or other problems associated with filtered daylight. The requirements for control of illuminance could be met using two layers of such a sputtered titanium film on the window with one layer of Mermet Sunscreen 4500 Natte 007 Perle used as a blind in front of the window. To give adequate protection against uv, a new film, supplied by Sun-X as NDTX20, was suggested which combines the daylight reducing properties of a traditional sputtered titanium film with the uv filtration properties of a clear uv filtering film, thus nullifying the need for additional filtration.

The use of blackout blinds was considered as an alternative means of controlling the illumination. Such blinds would need to be raised during the normal opening hours to allow visitors to see through at least some of the windows. The budget would not allow for blackout blinds in addition to the Mermet Sunscreen blinds and the NDTX20 film, inevitably leading to higher illumination levels during opening hours. However, as long as peak illumination levels could be maintained below about 1000 lux, such a system could be used to reduce the overall exposure of objects in the gallery, thereby reducing rates of degradation.

There is a fairly short critical time after the Museum opens and before the sun passes over the building when sunlight penetrates directly into the gallery. To test whether maximum illumination levels in the gallery could be adequately controlled using just the double layer of NDTX20 film even during these times, the following approximate measurements were taken in room 72 at 10.00 hours on the 19th May:

Direct sun penetration had stopped by 11.30 hours and at this time the light measured at the window, without filtration, had dropped to 5,0001ux. Even on a bright day it appeared that two layers of film would be adequate once the gallery was out of direct sun.

The option involving movable blackouts would need to have resulted in a significant reduction of annual exposure in order to be preferred to the potentially more reliable low maintenance option of fixed blinds. A rough calculation suggested that this would not be the case. However this calculation did not take into account the question of solar gain.

Consultants were engaged to assess the likely need for measures to combat solar gain. Their proposal was to estimate the likely degree of sun penetration into the building, using an approximate analysis of the degree of external obstructions to the window. From this and an approximate measurement of the thermal capacity of the building they proposed to calculate the likely temperature rise in the gallery under four different solar control situations. These were (1) without protection (2) with solar film (3) with blinds (4) with no window at all. In the end, mainly because of the levels of reduction in energy transmission provided by the film and the results of our own environmental monitoring in the gallery, we did not pursue this interesting avenue.

Two approaches were taken to testing the effect of the film and the blind materials. In one, a test rig was built and used for carrying out measurements in the gallery. The test rig consisted of a light-proof box in two parts that allowed measurements to be taken through various combinations of layers of film and blind via a light meter inserted through a small flap at the back. The other method involved the use of uv-vis-nir spectroscopy to measure the transmission characteristics of the film. There was close agreement in the results obtained using these two different methods.

Illumination intensity: the integral of the power distribution of the illumination weighted by the sensitivity of human eye to the various frequencies (400nm - 760nm).

Metamerism: colours which match in one set of viewing conditions but not in others are said to be metameric.

Sputtered coating: a metallised coating produced by bombardment of the metal with high energy particles at low pressure.

All spectral measurements in accordance with ISO 9050

Film manufacturer: Deposition Technologies Inc., USA. This fihn has a titanium sputtered coating for reducing illumination levels without degrading colour rendition or changing correlated colour temperature (ie. warmness or coolness) of light. This film does not introduce metameric problems. The sputtered coating on the film produces only partially reflective film therefore it does not change externalappearance too greatly. The film also has uv filter incorporated, filtering D65 ref. daylight to less than 10µW/Im.