In an article published in Soviet Museum at the end of 1991, Irina Kachanova, Head of Textile Conservation at the Moscow Kremlin Museum, expressed her fears about the future of conservation in Russia. She estimated that with current resources it would take seventeen centuries to do the conservation work which is needed on Russian collections. There are 5000 conservators in Russia but only 2100 of them are trained and most work in Moscow and St Petersberg. Despite textile collections of extraordinary richness and quality, there are no specialist training programmes for textile conservators and as the country struggles through a period of painful and dramatic change, the future is uncertain for conservation. While there are no longer any restrictions on contact with the West, communication is very difficult, basic services have broken down, the postal system is unreliable and the instability of the rouble (inflation is running at between 2-3,000%) means that it is virtually impossible for conservators to travel abroad.

It was under these circumstances that I received a letter from Irina Kachanova inviting me to visit Russia with Mary Brooks of York Castle Museum, for an exchange of information and ideas. Irina wrote 'Within the framework of the Association of Soviet Restorers we have established in Moscow a Centre for Textile Restoration'. It was the Centre which initiated the invitation with the official backing of the Director of the Moscow Kremlin, Irina Rodimtseva. 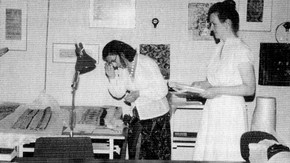 During our two week stay in Russia in August 1992, we visited 14 conservation studios and 10 museums in Moscow, St Petersberg, Borodino and Zagorsk. Facilities in nearly all of the studios were poor; few had adequate space, lighting or extraction. There was rarely enough room to separate different functions and in some textile studios, kitchen areas were used for dyeing. We did not see any specialised textile conservation equipment and there were no facilities for washing or solvent cleaning. Small tools were in short supply, razor blades were often substituted for scalpel blades, and fin pins and needles are hard to obtain. Most materials are natural; silk is nearly always used for stitching and wheatstarch is the preferred adhesive. There is a cautious and guarded interest in synthetic materials (particularly adhesives) but until now little information on their use in Western conservation studios has been available in Russia. Some studios still prefer to use natural dyes.

The range of objects is generally narrower than that encountered in many Western textile conservation studios since the collections relate only to Soviet history. To some extent this has limited the development of a wide range of techniques. The most common problems facing the Russian textile conservator are adhesive techniques for shattered silk flags, the cleaning of degraded metal threads, consolidation of degraded pearls and the consolidation of painted surfaces. All work is meticulously recorded and scientific analysis is considered an essential part of any treatment procedure. At the Kremlin, Irma Kachanova works closely with the Laboratory for Material Studies in Moscow University. Here Dr Vyacheslav Krapukhin, formerly of the Ministry of Defence, undertakes SEM photography for the conservation studio and helps in fibre identification and in the assessment of fibre deterioration. His laboratory has also been instrumental in determining the effects of different methods of cleaning on degraded metal threads. Methods are more interventive than those currently used in the West but concern for the integrity of the object is paramount and despite all the obstacles we saw some excellent work. 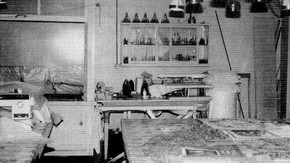 Most provincial museums have no professional conservators. Irma Kachanova estimates that in some provinces, 70-80% of the collections are in urgent need of conservation. The military museum at Borodino with its important collection of uniforms and Napoleonic banners, approached her with their conservation problems. As a result of this initial association the Textile Restoration Centre or more formally the Scientific Research Centre, referred to in Irina's initial letter, was established in 1989. Its Director is Irma Smirnova who trained as a textile conservator in the Kremlin studio and who now lives in St Petersberg. It is an exciting and innovative venture and has survived extraordinary difficulties. Its aims are two fold - to provide a conservation service for provincial museums, which is paid for by regional governments, and to increase the incomes of the conservators who work for it. Twenty conservators are associated with the Centre and except for Irina Smirnova, all are in museum posts. It is situated in two basement flats in a low rise building on the outskirts of Moscow. The flats had been flooded and when we visited they were undergoing renovation. All of the basic furniture in the Centre had been provided by the conservators but when we visited a carpenter was making a work table. The space has been divided into wet and dry areas and one small room has been retained as an office. A full time administrator is employed. Profits are put back into the Centre and so far they have been able to buy a stereo microscope. 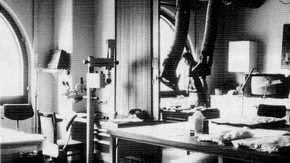 Fig. 3. The studio at the Tretyakov Gallery, Moscow. (click image for larger version)

Two years ago the funds of the Centre were seized by the government and frozen. Irina Smirnova, who is a courageous and determined woman, somehow managed to extricate the money and under the confusion of changes in the law, set up the Centre again. Six prints and drawings conservators were invited to join from the Hermitage to boost profits. Irina Smirnova travels all over Russia and the regions to assess conservation needs. We were shown a 6th century shepherd's coat from the Caucasus awaiting treatment. The Centre hope to organise exhibitions for provincial museums and would eventually like to train conservators. They have recently bought a collection of archaeological textiles which they intend to conserve and sell for a profit, an idea which would have been revolutionary only a few years ago.

My visit was supported by the British Council. Victoria Fields, Assistant Director in Moscow, visited the Kremlin studio and was impressed by the initiative shown in establishing the Centre. The British Council has agreed to buy them some basic equipment and to fund an exchange visit in 1993. This contact and exchange with conservators in the West is vital at this difficult time in Russian history, hopefully our visit has helped to promote this communication.