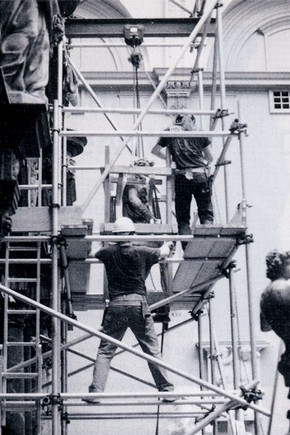 Using the experience of the conservation of an alabaster figure, this article considers issues raised regarding its treatment. Included are the movement of a large object, the structure of alabaster and the suitability of solvents on a water-soluble stone, and discussion relating to the degree of restoration involved.

In 1994, the Reijksmuseum in Amsterdam will be mounting the exhibition 'The Golden Age of Northern Netherlandish Art', for which the figure of St. John the Evangelist will be borrowed from the V&A. It was carved by Hendryk de Keyser in 1613 for the Cathedral of St. John in Hertogenbosch, Holland, and is one of nine life-size figures among other alabaster ornaments on the rood screen now in Gallery 50. The loan request occasioned a closer inspection of the figure than it had been undertaken for sometime.

At fast sight, the figure appeared to be in a very fragile state. A large part of the base had been replaced, and there were several cracks in the stone, mainly in the right leg and the lower part of the drapery. A heavy layer of dust prevented any further understanding of what the structural condition of the piece might be.

The figure was set at a height of 3.5m above floor level on the rood screen. With a weight of 325kg the fast concern was the safe removal of the figure and its transportation to the studio. To move it, a scaffold was built, with a gantry overhead.

The figure is carved in a highly figured alabaster, three-quarters in the round. The back has been roughly tooled with a punch, to help fixing. However, there was no evidence of the original method of fixing, and it was discovered that the figure had been held in place by its own weight. Slinging a large heavy object such as this figure with deep undercuts, requires considerable thought and preparation. The need to bring it forward off its plinth before lowering it, meant assessing the distribution of the weight throughout the figure. The figure has a slant in the modelling that must be taken into consideration as there may be a change in attitude of the figure in lifting, if not correctly slung, which could cause damage to the object by the release of stresses. Vulnerable areas of the figure were packed with a polyethylene foam to avoid crushing through pressure exerted by the slings. Once it had been moved onto a pallet, a crate was built up around the figure with padded supports holding the figure in place. The slings were then transferred to the crate, and the whole was lowered through the scaffold to a trolley below. 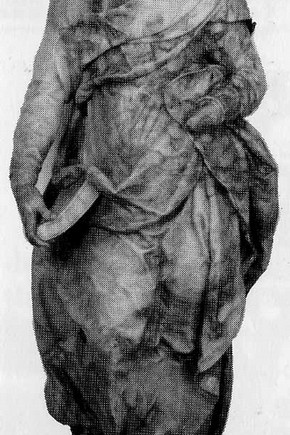 On arrival in the studio, the thick layer of dust was removed with a brush and vacuum cleaner. This exposed the alabaster surface which was found to be in a good condition, although throughout the figure were several cracks. Some cracks had large fills in them, but were apparently quite stable. A worrying crack in the remainder of the original base that had a cramp set in it, also had a large pressure break (in effect a large chip), that was probably caused simultaneously with the fissure. An uneven joint between the replacement piece in the base and the original meant that the figure was unstable.

The two fifths of the base that was a replacement, was an unsympathetic lump of limestone, with crude modelling in plaster where much of the right foot and a fold of fabric were missing. The figure had been thickly coated with wax that had become brittle and was very dirty.

There were two main areas of concern:

The rood screen was built between 1010 and 1613, and was dismantled in 1857. It lay in storage for two years in the Museum, before being erected first in Gallery 46 (the Plaster Cast Courts) and later in its present site. It has thus been subjected to a range of conditions, and to the various methods of care taking used in the past. The alabasters all have a discoloured surface. This is due in part to the dirt and wax layer present, but the stone has taken a patina beneath this layer, that there was no intention to remove.

The structure of alabaster

It would be easy to assume that because alabaster is a stone, it has great strength and is hard-wearing. Although alabaster, calcium sulphate dihydrate (CaSO4. 2112O), often looks very similar to marble, calcium carbonate (CaCO3 ) that is more durable and takes a high polish. They differ structurally, and are formed by different processes. Marble is fine grained, with a tight crystalline structure, formed from limestone which has been metamorphosed underground through being subjected to heat or pressure or both, and has then recrystallised. Minerals and impurities such as clay deposits in the limestone also metamorphose in this process and this causes the characteristic veining. Alabaster is a fine-grained form of gypsum. It is a cryptocrystalline sedimentary rock, i.e. the crystalline aggregates are so small they are only visible under powerful magnification.  The aggregate was precipitated from sea water and salty ground waters 200-280 million years ago, and was subsequently modified in periglacial conditions, causing the cold hydration of anhydrous gypsum (CaSO4 ). The purest form of alabaster is white and translucent. However, traces of iron (III) oxide produce veins and patches of browns and reds. Alabaster is a soft stone, and is slightly water soluble.

This difference between alabaster and other polished stones gave rise to the need for particular attention to cleaning methods. I have found little written specifically relating to the cleaning of alabaster. There is evidence that although people are aware of the water solubility of alabaster, the use of some materials containing water is continuing. 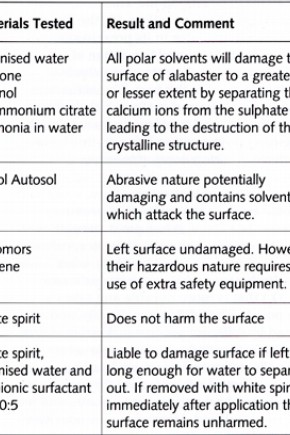 A variety of cleaning materials were tested to establish their suitability. The first test was the simple application of a material to the surface of a polished sample of alabaster (as a poultice with blotting paper where the material was a liquid), for increasing amounts of time (2, 5, 10 and some materials 20 minutes). The areas of application were then examined under a microscope with 3.5 fold magnification. Materials which caused the etching of the polished surface were deemed unsuitable (see table).

With the results in mind, the cleaning of the figure therefore went ahead with the white spirit emulsion, immediately rinsed with white spirit.

After the cleaning was completed, the figure was hoisted up to allow the study of the fixings in the replacement area of the base. The most important consideration for the base was its stability, although aesthetics also played its part.

Three rusting cramps between the limestone and the alabaster were removed, and the limestone taken off after removing the plaster joint by picking away with scalpel blades.

A piece of similarly coloured alabaster was used as the new replacement for the base, using polyester resin adhesive and stainless steel cramps set into the original holes of the base. The two remaining iron cramps were then removed from the left side of the base, and replaced with stainless steel.

At this point I had to consider what was to be done about the missing area of modelling immediately above the new section of the base. When the figure goes back onto the rood screen after the loan, very little of this area will be visible from the ground. However, while on display at ground level, these missing areas are disfiguring. I was left with the dilemma of whether, and how far, to restore. With sculpture, there is the difficulty of deciding to what extent the piece should be considered an aesthetic object that must be whole to be fully understood and enjoyed, and to what extent we should acknowledge the history of that object as important or even necessary to the understanding and enjoyment of it. A compromise was reached with the decision to build up a foot shape and a fold of fabric from polyester embedding resin with ground alabaster filler, in a way that would be visually acceptable but without trying to recreate the original.

In preparation for its safe display on exhibition, the figure was coated with a fine layer of microcrystalline wax, and set down onto a wooden pallet that will be its base constantly until its return to the rood screen.

The treatment of this figure was, for me, a double issue. On one hand was the evident need for physically stabilising the figure and the investigation into the effects of various solvents on alabaster. The importance of avoiding the use of polar and abrasive solvents was confirmed, and cannot be over emphasised. This work has given rise to further tests, presently underway, on the deterioration of the surface of alabaster caused by commonly used cleaning agents, conclusions of which will be recorded later. On the other hand this project raised questions about how far restoration in a museum should be taken, given that as far as the original use of the object is concerned, a museum is a contrived environment and is understood to be so by the viewer of the object and, secondly, non-intervention is preferable where possible. I wonder what part acknowledging that the object is leaving its usual display conditions for exhibition elsewhere, should play in the making of decisions regarding the extent of conservation and restoration? Ultimately, of course, concern for the stability and safety of the object is paramount.