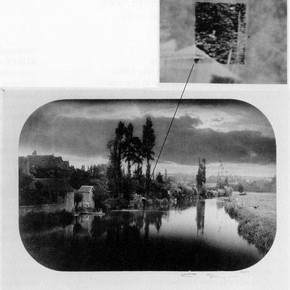 'River Scene, France' by Camille Silvy is a hauntingly beautiful image. When the photograph was originally exhibited in 1858 it was remarked 'it is a triumph of the art'. It is no mean feat to write a book on one single object. Mark Haworth-Booth, Head of Photographs in the Prints, Drawings & Paintings Collection, was first enamoured of this landscape when visiting an Arts Council Exhibition entitled 'From Today Painting Is Dead' (V&A 1972). In this book he has managed to draw together all the strands of arts, science, technology and literature to provide a fascinating background for the history of this photograph.

Whilst writing his footnotes the author asked me, as the conservator of photographs, to make photomicrographs of all the figures, so that the costumes could be dated and also to find the point where the two negatives met. The photograph is a gold toned albumen print made from wet collodion glass plate negatives. For this process two negatives would have been used, one for the foreground and one for the sky. The joint was located within the poplar trees in the distance on the left bank. Under high magnification the figures visible on both banks were duly photographed and recorded. Excitement set in when a hitherto undetected 'man in the bush' was found.

Having made photomicrographs of the supposed head and shoulders of the figure, a high quality facsimile was examined using a video microscope. The figure loomed larger. Later when a firm was demonstrating an image enchancement machine the facsimile was scrutinised again. The figure grew even more distinct; the conservator was accused of having a sixties 'blow up' mentality.

Scientifically however, there are not enough grains of silver in the area to support the presence of a figure. Of all the fertile speculations of what a seemingly naked figure was doing in the bush the two most feasible follow.

Was Silvy emulating the panorama portraitists of his day by setting up his camera and jumping into the bush so as to include himself in the frame? Nowhere in the text, despite his many talents, does it mention that Silvy was an athlete of Olympic standard. This would certainly have to be the case if the exposure time was about the length of time it would 'take the moorhens to swim to the riverbank'. The second theory was that a Frenchman was bathing in the nude, saw the camera being set up on the bridge and dived into the bush in the interests of decency. Until the original negatives turn up one can only ponder his existence. As Weston Naef so aptly says in his foreword 'the enigma within the enigma'.