Tutors and students of the RCA/ V&A Conservation Course were fortunate to be able to visit Rome for a week long study trip this summer. 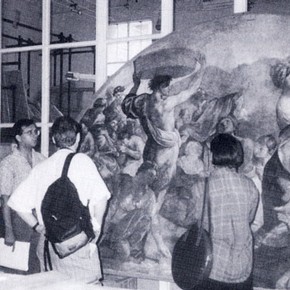 The long and varied history of Rome together with the enormous wealth generated by its central economic and political position has resulted in the creation of a city which is immensely rich in cultural heritage. The superimposition of numerous cultures and their indigenous art forms gives Rome a 'layering' of historic periods which presents a cross-section of the history of European civilisation. An example of this cultural stratigraphy is the view from the Capitoline Hill, from which one can see the Roman Forum (c. 753 BC), the Capitoline Museums (buildings date from the 15th to 17th centuries), Trajan's Column (AD 113) and the twentieth century Monument to Vittorio Emanuele.

A number of organised visits to conservators, conservation studios and laboratories were made during our stay. On Tuesday morning we visited the conservation laboratories of the Instituto Centrale del Restauro where we were met by Signora Antonella Merzagora who arranged our guided tour, with Mark Gittens, of the stone, archaeological, wall paintings and paintings conservation departments. After this visit and a walk via the Tempio Fortuna Virilis, the Arco di Janus and the Tempio di Vesta, we went to the Capitoline Museum to meet Dr Roberto Nardi, a private restorer who has been involved for the last two years with the conservation of sculpture and architectural details of the corridor and inner court of the Museum. The Museum collection is based on ancient sculpture purchased by Pope Clement XII (1730-40) and has been added to by later popes. It is ranked as one of the worlds oldest museums having been open since 1734. The large scale of this on-site conservation programme has necessitated a high degree of organisation for which Dr Nardi has used project managing software. Computer aided design programmes have been used to produce diagrams of each sculpture for documentary purposes.

On Wednesday we arranged to go to see Raphael's Loggia in the Vatican, followed by a trip up the scaffolding to see the conservation work in progress to Michelangelo's Last Judgement in the Sistine Chapel. Images of the Sistine Chapel are ubiquitous but examination of photographs and reading of articles on the conservation of the Chapel in no way prepared me for the stunning quality of Michelangelo's work. The contrast between the con-served areas and the heavily soiled glue covered regions which remain to be treated is very striking.

Thursday brought a visit to the laboratories of ICCROM where we were met by Dr Marisa Laurenzi Tabasso, Ernesto Borrelli and other members of staff who gave a comprehensive presentation on the objectives of ICCROM and courses which they offer together with copies of literature on various aspects of their work. I was most impressed by a demonstration of their microscope and computer set-up which by utilising digital information processed by the Pro Mikro (Zeiss) software package can present multiple images for comparative purposes, enlarge and reduce aspects of the microscopic image and allow text editing and swift production of edited information for didactic and documentary purposes.

We learned a great deal from our visit and I would like to thank everyone who generously gave their time for making our trip la dolce vita!