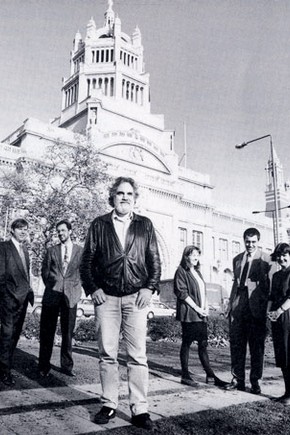 Members of the Conservation Department (click image for larger version)

As this Journal enters its third year of production there is one obvious alteration to its format: the staff chart on the back page has changed shape. This is probably the most obvious result of the restructuring that was started following the staff inspector's report of November 1992. The biggest change in people's lives has been the establishment of three new senior posts to manage three new groupings of practical sections.

Although the Conservation Department of today bears little resemblance to the Department that was established a little more than thirty years ago, or indeed to the Department as it was when the present Head was appointed 15 years later, the change has always been evolutionary rather than revolutionary. The recent obvious change to the senior management of the Department was seen as dramatic and was all the more traumatic because ten colleagues had to compete with one another knowing that only three could win. Moreover, since there was no precedent, it was not certain what the prize was. This disturbance to routine occurred at a time that an unprecedented number of long serving staff were retiring. Even if it were not true that additional change always occurs when posts change hands, this sudden loss of experience and knowledge of the collections would be sufficiently unsettling.

However the current rush to retirement will be over in just under a year, by which time the new senior management team will be more confidently established. After that the Department can settle down to another era of (somewhat accelerated) evolutionary change. The direction of change will be influenced not only by changes in Museum policy and funding but will also be shaped by forthcoming discussions within the Department. In late January some twenty-five members of the Department will be going on a three day 'residential' at which it is hoped that representatives of our client group can participate.