The work of students on the RCA/V&A Conservation Course is regularly featured in articles in this Journal. Such articles may be based on studio projects or on research exercises and they are selected for inclusion (or not) on the same basis as articles presented by members of staff. Besides such articles, it has been the intention to illustrate, on a regular basis, the range and variety of student work by including abstracts of all the written work prepared by students for assessment towards MA or MPhil degrees. The range of material includes essays (on history of art/ design, materials and techniques, and science subjects) final year project reports, formal research proposals and MPhil theses. Nos. 3 and 6 of this Journal did present a selection of abstracts and promised more. Since then a substantial backlog has developed which we hope to put right in the next two or three issues. As a first installment, abstracts of the final year Project Reports of MA students who graduated in July 1993 are presented below. 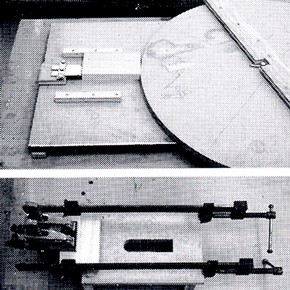 The purpose of the experiment was to investigate the reversibility of distinct strengths of animal glues by several methods of reversing - both traditional and experimental - in different woods and types of joints. This was done in the context of animal glue as a conservation material.

Two woods, Pinus Strobus L. and Fagus Sylvatica L., were made into three cabinet joints.; mortise and tenon, edge-to-edge and veneered panel. these were glued together using three different strengths of animal glues.

The type and amount of damage was qualified and quantified and the results analyzed for any specific glue strength and/ or method which was successful.

The paper describes a project aimed at determining the most suitable consolidation treatment for endangered glass paint. A number of possible causes for paint and glass deterioration are outlined including types of corrosion. Previous performance is assessed and a description of the final eight most suitable treatments is given.

Some of the treatments are specifically intended for the consolidation of glass paint while others have been used on stone and are adapted for this examination to become suitable for use on glass. To examine the treatments, simulated samples of flaking and loose glass paint are prepared. Tests are carried out to examine qualities such as appearance, preparation, penetration and fixation affect. Other factors affecting a treatment's suitability are also considered.

The focus of this research project is the study of a remarkably preserved 14th century polychrome stone effigy of a knight, known as De Lucy. The project is divided into two parts; the first section deals with historical and technical aspects, while the second part is composed of analysis of the polychromy and the stone. Comparisons with the other 14th century ,polychrome stone sculptures are made throughout the project, firstly to set the effigy into historical context, and secondly to evaluate findings in polychrome and petrographical analysis.

The last section of the project comprises a set of experiments, designed in collaboration with the Rocks Mechanics Laboratory at the Imperial College, London, to determine the physical properties of the stone museum objects. in this case, the De Lucy effigy and the Bristol Cross statue, Edward III, were the two limestones to be tested and compared.

the dual approach of detailed historical and technical research, coupled with scientific analysis, has been extremely rewarding. This has yielded a rich source of information on the effigy, and on the medieval techniques used for its manufacture. The detailed stone analysis has been extremely beneficial, not simply for correct identification, but also in elucidating the reasons for its behaviour in interior or exterior sites. The tests to determine the physical properties have provided an important body of information on each stone tested: they also point to broader research possibilities for the quantitative analysis of stone in historical objects.

An article based on this project can be found in No. 8 of this journal.

10,400 words with figures, graphs and photographs

A literature review describes the components of traditionally gilded wood and the way in which they interact with moisture in the surrounding air. These components include wood (as the support), parchment size (as the binder commonly used in the gesso and bole layers) and gold leaf (as the interface between the gilded wood and the atmosphere).
In the experimental section, various gilded wood test samples were exposed to a range of relative humidities within a humidity chamber using saturated salt solutions. The characteristics of the relationship between the dimensional response of gilded wood and variations in relative humidity are described. The principal method of measurement was using vernier calipers. However, the potential of photogrammetry as a three-dimensional measuring technique to record small dimensional changes was also examined, using both the prepared test samples and small sections of a real frame.

This project addressed the problem of repairing embossed wall coverings. The first chapter examines the materials and production techniques of two wall coverings, Tynecastle canvas and Lincrusta. Their radically different evolution is highlighted.

The specific task was to develop a feasible method remaking these materials in order to infill areas of loss or severe damage. This entailed investigation into moulding materials that could be used successfully and safely in situ, and barrier materials that would protect the original whilst the mould was taken. 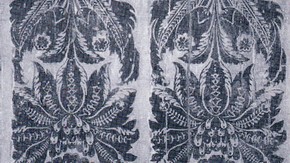 A Typical 18th century flock design. Red flock on a red background, now badly faded. Museum no. E 594-1922, about 1735, from the office of H.M.Privy Council (click image for larger version)

Research into historical wallpapers is a very underdeveloped area. Eighteenth century flock wallpapers are an important precursor in the establishment of paper as a popular wallcovering. This project aims to examine the role of flock wallpapers within its social and art historical context, explore the materials and techniques used in production and provide the conservator with fundamental guidelines on the care of these papers.
A small exhibition, 'Paper, Pigments, Paste', based on the work of Mark Sandford and Phillippa Mapes, can be seen at the V&A between 22 September 1993 and March 1994

9000 words with photographic illustrations and samples of materials 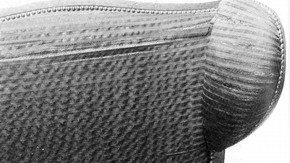 This report deals with the conservation of the haircloth cover of a mechanical chair in the V&A Museum furniture collection. The haircloth textile is the original covering of the wings and inside back of the chair, which dates, from about 1800. The report included some historical information about mechanical chairs and horsehair fabric.
At some time in the past, before the chair became part of the V&A collection, the covers have been repaired with upholstery webbing, adhesive and paint. The removal of these materials is described in the report, as are some of the difficulties involved in the treatment. It was necessary to make moulds of some elements of the three dimensional upholstery forms, so that the haircloth cover retained its shape during all the stages of the conservation procedure.

The report includes details of the testing of a range of adhesives to find one that was suitable for haircloth. A method of applying the adhesive to the uneven surface of the textile had to be developed.

From the beginning of the invention of photography in the late 1830s, the desire to produce a stable photographic image was a priority. The successful development of the Platinum Print in the 1880s was a direct response by William Willis and others to produce a permanent image of quality and aesthetic appeal. The heyday of the Platinum Print lasted for 30 years from 1886 - 1916 when the spiralling cost of platinum made the process commercially unviable. Since the 1980s there has been a revival in the production of Platinum Prints.

In general terms, a paper that has been sensitized with a chloroplatinite salt and then reduced with ferrous salt will produce a finely divided image of platinum metal. A phenomenon associated with platinum prints is iron staining caused by the inadequate removal of iron salts after processing or iron stains from other sources.

A chelating treatment using ethylene diamine tetracetic acid (EDTA) salts in conjunction with sodium dithionite (as a reducing agent) was carried out on four late nineteenth century platinum prints to remove stains which had been visually identified as being due to iron from a number of sources. Identification of the photographic process and the presence and quantity of iron were established by x-ray fluorescence analysis (XRF). Subsequent XRF spectra quantitatively demonstrated the
success of the treatment, indicating the elimination of iron from the prints. Also, staining was found not to be caused by iron in isolation. Other causes of staining were found to be an organic toner and an unidentified inactive mould growth in association with iron. The conclusion of the study is that the success of the EDTA/ Dithionite treatment is dependent on whether iron is the major cause of staining. This can be determined in advance of any treatment by XRF analysis or by other methods.

An article based on this project can be found in No. 8 of this Journal.