The conservation of Charles Dickens' manuscripts 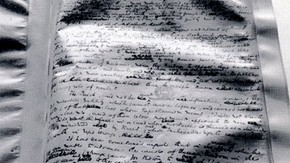 Fig.1. The manuscript of 'American Notes' before conservation (click image for larger version)

The National Art Library (NAL) in the Victoria and Albert Museum counts amongst its treasures the original manuscripts of most novels of Charles Dickens. Together with proofs and letters they were bequeathed by Dickens to his friend John Forster and are now part of the Forster Collection in the NAL.

In a NAL survey these manuscripts (12 novels in 38 volumes) were identified as being amongst the most unstable of the artefacts of greatest value in the library. They had been rebound between 1965 and 1966. Unfortunately the method chosen, inlaying the single manuscripts pages, had led to a severe warping of the leaves. A project was set up to research the history of the manuscripts, possible treatments for paper and inks and possible rebinding methods.

This collection of manuscripts covers a range of 33 years of Dickens' writing, with 'Oliver Twist' being the earliest (1837 to 1839) and 'The Mystery of Edwin Drood' still unfinished (1870). Not only does this long period show the development of Dickens' writing style, but it is also witness to a gradual change from iron gall ink to blue ink and from cream to blue writing paper in a time of developments in paper production and artificial pigments.

The novels were published in weekly or monthly magazines and the manuscripts bear signs of close co-operation with printers and illustrators: fingerprints of printing ink, printers' names scribbled across the pages and leaves that were often cut in half to distribute them amongst the typesetters.

Leading an active life, Dickens was writing in different locations, at his house in Kent or his town house in London, while travelling in the UK and also abroad. Different quills and nibs and change in ink supplies lead to differences in ink shades which give valuable evidence of his process of planning, writing and correcting.

The manuscript was written on one side only of a machine-made writing paper. The double leaves were folded and torn in half before writing; all manuscript leaves therefore have one torn side. Cancelled text and corrections are found on the verso. Corrections are also sometimes carried out by sticking another piece of paper across the cancelled text with seals.

The manuscript pages were glued to a slightly larger thin support paper along the two vertical edges which then had been in-layed during the last rebinding into a blank book of strong repair paper. Narrow gutter margins and the incompatibility of all the papers involved had led to creasing and warping of the manuscript leaves (Fig.1). The strain for the manuscripts was evident in a strong resistance and rattling sound every time a leave was turned over. This was also dangerous for already brittle areas of iron gall ink.

It was important to establish the binding history before deciding on a possible rebinding method. The manuscripts were . bequeathed to the Museum in 1876. Photocopies made in the early 1960s still showed the original bindings: thick volumes in half leather with marbled sides, the manuscript pages glued to thin support leaves. Fortunately, a box was found in the NAL containing three of these covers, stating that the manuscripts had been rebound in the Museum bindery during 1965 and 1966. There also was other evidence that the manuscripts had been bound for Forster and hence that Dickens had kept them as loose leaves.

To get an overview of the condition and requirements the manuscripts were surveyed page by page. The cockling and severe strain of the leaves when they were turned over was found in all manuscripts. They needed to be released and rebound in a more sympathetic way. Besides this physical problem there was concern about manuscripts written with iron gall ink; signs of ink corrosion were visible in many instances, though there were only a few severe cases. Should they be deacidified?

Existing literature was scanned and conservators and scientists consulted internationally. The great variety of inks used by Dickens, the importance of retaining their shades for Dickens scholars and the fact that ink corrosion was generally not in an advanced state led to the decision not to deacidify at this point but to improve the surrounding conditions. The acidic support leaves were removed and the manuscripts bound between alkaline buffered paper. Brittle ink areas were consolidated from the back with dry methyl cellulose and Tengujo impregnated with calcium hydroxide. The blue ink, used from 1843 onwards, did not pose any conservation problem.

Another problem seemed to be pages cut by the printers and mended again with a wide strip of paper and animal glue. The glue had discoloured the blue paper locally to a light brown. Was this an active process or was it stable? The colourant was identified as being artificial ultramarine. This pigment is stable in alkaline but sensitive to acid conditions. Under magnification there seemed to be fewer blue particles in the discoloured areas, but the difference was not big and surface pH readings were the same. From a historical viewpoint these repairs were part of the
publishing process. As there was no conclusive evidence of an active destructive process, it was decided to leave them in place. 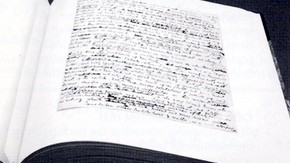 Two possibilities for rebinding were considered: 1. encapsulation in polyester and 2. hinging the leaves into blank books. Encapsulation is quicker, but produces bulky volumes. The pages are safe to handle but lose their paper character. As the NAL possesses microfilms and photocopies of the manuscripts, access to the originals is restricted and they are not used very often. Hinging the manuscripts into blank books of alkaline paper is more sympathetic to the character and the importance of the object. It also provides alkaline buffer sheets for manuscripts in iron gall ink.

The manuscript leaves were taken off their backing paper and glue traces cleaned off with methyl cellulose and cotton buds. The freed leaves still showed signs of in-built tension (cockling, contracting edges) and had to be relaxed by placing them into a one-sided Gore-tex sandwich for a short period. After drying between blotting paper the leaves lay flat and flexed well.

It was thought important not to constrain the manuscript leaves in future, yet adhere them to the support in such a way that they would not be handled directly. A solution was found in hinging the leaves into the blank book by one edge only (see cover.) The other edge is held down with a strip of Bondina across the corners which is pulled through slits and fixed on the support verso with heat-set tissue. Like this the manuscript leaf can flex without restrictions when turned over, yet is held on its support leaf. Expansion or contraction of the leaves is possible without distortion. Handling the original would be avoided through generous support leaf margins. Leaves with manuscript on the verso are fixed in the same way, but a window for the text is cut into the support leaf, followed by a blank page as a barrier between adjacent manuscripts.(Fig.2) Blank books of alkaline paper are bound in half leather with marbled sides and the manuscript leaves hinged in subsequently. A drop-back box for each book provides protection during handling and against fluctuations in relative humidity within the library. 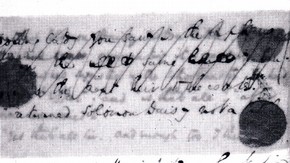 Fig.3. The manuscript verso on a light table; both cancelled and corrected text are visible (click image for larger version)

In the course of removing the backing from the manuscript leaves cancelled text was revealed on about 500 pages that had been covered before. The curator expressed interest in also revealing the cancelled text which was covered by correction slips sealed onto the manuscripts. This presented an ethical problem, as from a conservation point of view the seals were stable and there was no need to remove the slips. Methods were investigated that could show the cancelled text without disturbing the seals.

One way tried was to photograph the leaf on a light table, so that the text was visible as a mirror image and then to print the negative in reverse. This worked quite well for iron gall ink, but not for text written in blue ink and on blue paper. Another way was to use computer graphics to manipulate the image; help was given by the Graphics Department in the Royal College of Art  1 . Slides were taken from the manuscript on a light table (so that both cancelled and corrected text were visible, Fig. 3), transferred onto a Photo CD and fed into a computer (see Fig.4). The image could then be manipulated: lines not belonging to the cancelled text could be erased, faint lines enhanced and the text made available on a print-out. This side of the project was not carried further, as both time and the money to complete the conservation are limited. 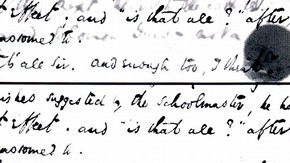 The conservation of Charles Dickens' manuscripts is a project that required research on a variety of issues such as the history of the manuscripts, iron gall ink, deacidification, blue papers, rebinding methods and materials. It is also a project on a large scale: 6184 manuscript leaves to be treated, 38 volumes which need to be rebound into 74 blank books.

I was entrusted with the project in January 1993 and the first months were spent on research. So far (August 1993) one novel in blue ink on blue paper and one in iron gall ink on cream paper have been conserved and rebound successfully, but 10 more novels are awaiting treatment and other problems might be encountered. The project is expected to take at least two more years. £25,000 has been given by the Wolfson Foundation to cover the first year, but more funds are needed to complete the project.

I would like to thank Josephine Darrah and David Ford, Conservation Science Group,V&A, for their help, as well as Dr Rowan Watson and Sue Robson from the NAL and Richard Doust from the RCA. I also would like to thank Helen Shenton for her continuous support and everybody who helped by responding to my enquiries.

The project was made possible with a generous grant by the Wolfson Foundation.