BUGS (or Beating Unwanted Guests) was the subject of the 12th meeting of the Conservation Scientists Group held on 18th November 1993 at the V&A. Forty representatives attended, mainly from London museums, many of them with expertise in particular aspects of pest control. The aim of these meetings is to present on-going work to a specialised audience. Time is allowed for discussion and tour of the host organisation. 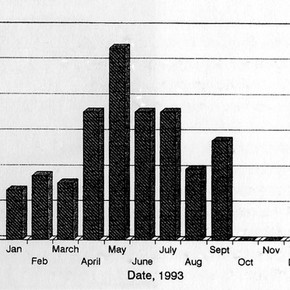 Fig.1. This graph shows the total insect activity of all the textile galleries and storage where traps are monitored fortnightly every month throughout the year. (click image for larger version)

The discussion was initiated by short presentations. David Pinniger of the Central Science Laboratory, Slough, opened the day by summarising the key elements of successful pest management in museums as Identification, Monitoring, Prevention, Control and Future Strategy. His review mentioned specific applications within the V&A and was an excellent introduction to the next two talks of the morning session (Val Blyth and Lynda Hillyer) which outlined the monitoring and control aspects of the V&A Museum strategy. Three important issues were highlighted.

Short presentations from three separate institutions provided a useful springboard for discussion in the afternoon session. Vincent Daniels, from the British Museum, pointed out potential discrepancies in the results from different loggers used to monitor temperature and relative humidity in the freezing process. Bob Child from the National Museum of Wales described the uses of different types of sticky traps and warned that freezing does not always kill all insect life. Evidence of live moth was seen in a carpet after a freezing programme at Brodsworth Hall in Yorkshire. Roy Vickory from the Natural History Museum asked what method could be used to protect dried flower specimens from insect attack, particularly when they were sent on loan to the tropics. Mystox, which has been used successfully for many years, is likely to be banned under new legislation. With three and a half million specimens to protect, he put our problems into perspective. 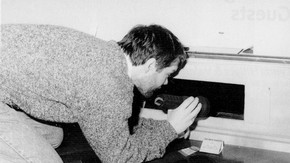 Fig.2. The routine 'bug-hunts' involve the monitoring of insect traps and inspection of 'dead spaces', here shown below a display case. (click image for larger version)

The meeting coincided with the publication of a comprehensive report on pest problems in the V&A by the Museums Bug Committee.1  The report describes the insect pest control strategy that has been developed over the past four years and contains a number of recommendations for the future. South Kensington is a high risk area for two species of carpet beetle, Anthrenus sarnicus (Guernsey carpet beetle) and Attagenus smirnovi (Brown carpet beetle). The larvae of these insects feed on keratin. Unchecked they can cause widespread damage to museum collections containing proteinaceous material such as wool, fur, feathers or natural history specimens. In October 1989 some larval moults were discovered in Gallery 94. From this small beginning a comprehensive strategy has emerged involving the collaboration of many sectors of the Museum. A constant factor in its development has been the advice and guidance of the entomologist David Pinniger.

The monitoring programme is the foundation of the strategy. Its main function is to detect and identify insect activity and to establish some idea of the extent of the infestation. Sticky traps are laid in a grid foundation in high risk areas and finds, both positive and negative, are recorded on a spreadsheet. The insect pest control form is checked first in Textile and Dress Collection where insect findings are recorded on floor plans. This also means that the collection most vulnerable to insect attack is notified first (Fig.1). Collections can obtain a yearly graph showing the distribution of insect activity in any one gallery or store that can be compared with activity in previous years. Inspection of traps is carried out by both conservation and curatorial staff at fortnightly intervals. This is time consuming but essential work since the results of monitoring give direction to more active methods of control and can help in the assessment of the effectiveness of control methods (Fig.2). Monitoring has prompted the need for a survey of dead spaces in the Museum (often potential breeding reservoirs for insects) and has highlighted the need for a regular rota of deep-cleaning. Infestations of carpet beetle are usually associated with poor hygiene. Improved standards of housekeeping is a positive outcome of the pest control strategy.

More active methods of control include the treatment of objects from suspect areas by exposure to low temperatures and the use of residual insecticides (Fig. 3). The freezing programme has become a routine annual event and over 800 textile objects have been subjected to exposure to temperatures of -30°c for 72 hours, guaranteed to kill eggs, larvae, adults and pupae. The Museum has a contract with an outside pest control company that is called in on a reactive basis when monitoring reveals unacceptable levels of infestation. Under the 1986 Control of Pesticides Regulations2  it is now illegal for unskilled or untrained staff to use pesticides. 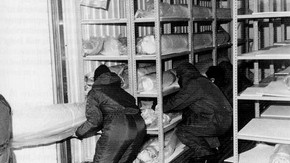 Fig.3. The freezer unit, fitted out with shelving to take rolled carpets and taperstries as part of a freezing programme which involved treating over 600 objects. (click image for larger version)

Restrictions on the type of insecticides now available in museums means that we have had to adopt a broader and more long term approach to insect pest control problems and emphasises the need for education, vigilance and collaboration among staff. Regular training sessions are held to increase awareness of bug problems and conservation staff have produced guidelines on the life cycle of the carpet beetle and handouts on procedures involved in monitoring and detection.

The strategy is under constant review and future recommendations by the Bug Committee include:

In association with the British Museum, we are carrying out experimental work with the Central Science Laboratories on the use of nitrogen fumigation for insects that can withstand low oxygen environments and we are interested in the use of oxygen scavengers for holding suspect objects before a decision is reached on final treatment.

1. Fora fuller description of the Museum strategy see Hillyer/Blyth, 'Carpet Beetle - A Pilot Study in Detection and Control,' 'The Conservator,' no.16,1992.
2. '1986 Control of Presticides Regulations,' HMSO.