This edition of the Journal continues the series of abstracts of students' written work. It could be said to complete the set, as MPhil theses are featured for the first time, together with the Materials & Techniques essays of the most recent graduates. Examples of all types of assessed written work have now been presented in the Journal and the practice will continue. We look forward to our first PhD...

It is gratifying when these abstracts stimulate enquiries about the students' work and the Course, but, unfortunately, we are unable to provide copies of essays. The rapidly growing corpus of work is accessible at the V&A by arrangement with the Course Tutor, for consultation on Museum premises. However, it must be accepted that the essays are as submitted - usually no corrections have been made, nor will grades or markers' comments be available to the general reader.

MPhil theses are rather different. As the single tangible result of at least two years' research, they are subject to a more formal assessment procedure. At the recommendation of the Examiners, corrections may be made before their deposition in the Royal College of Art Library. Consultation there is by arrangement with the Librarian. In all cases copyright rests with the author and users are requested to complete a consultation form.

It is only since the eighteenth century that glassmakers have been able to control, with any degree of certainty, glass compositions. Prior to then, the production of much of the coloured and colourless glass was governed a great deal by the craftsmen's environment and developed by astute observation. The essay explores the processes involved in colouring pot metal and flashed glass and discusses the range of materials available to the craftsmen.

3600 words with 35 illustrations in colour and black & white

This essay traces the origins and development of invalid chairs, particularly the type that enabled the user to propel themselves with mechanical aid. It gives an overview of the evolution of upholstery construction from the seventeenth century to the nineteenth century, in order to help the understanding of the techniques that could have been used to create the upholstery for the seat of this type of chair. This overview informed the examination of an invalid's mechanical chair from the eighteenth century which is in the V&A collections.

Sarah Boulter
Sculpture Conservation
A Discussion of Terracotta and Parian Ware Sculpture, With Examples From the V&A Collection

4800 words with 25 illustrations in colour and black & white

Using chiefly items from the V&A collections, the author illustrates methods used in the production of these types of ceramic sculpture in the last 500 years. Modelling, press-moulding and slip casting are described, as are the effects of firing. Surface decoration with glazes, polychromy and gilding are also covered briefly. Evidence for the production techniques may survive on the artefacts and conservation can be an opportunity to see these. In particular, works from the Italian Renaissance workshops of Della Robbia and the sculptor Mazzoni are examined in some detail.

4100 words with 10 illustrations in colour and black & white

The essay covers the history of the process, tracing its development with reference to the confusion in literature to the precise definition of the Cyanotype, Pellet Process and Blue Print. Recipes for Cyanotypes, the Cyanotype/ Pellet process and Toned Cyanotypes are followed by examples and accounts of the work of various practitioners of the process. They include the mid nineteenth century botanist, Anna Atkins, the late nineteenth century "Punch" illustrator, Edward Linley Sambourne and the contemporary photographer, Mike Ware.

The examines the origins of the flocking technique and its adaption for use on paper. Various aspects of the materials used are discussed, viz.; the paper, paint, adhesive and flock fibre. A full account of manufacturing techniques is given, from the
simplistic, early hand flocking process of the late seventeenth century to the more sophisticated methods adopted through the eighteenth and early nineteenth centuries, as the popularity of flock wallpapers became apparent. The essay aims to show how the successful development of the technique led to the establishment of flock wallpapers as the epitome of good taste in eighteenth century interior decoration.

A number of important embossed wallpapers and some of their imitations are discussed. Emphasis is placed upon the materials and production techniques used in these wallpapers, and their influence upon commercial success. The importance of recognising and distinguishing these superficially similar products, through an understanding of the materials and manufacturing processes is stressed. The decoration sequence applied in the production of stamped leathers and imitation leather papers is analysed and conclusions drawn from an amalgamation of specifications found in the limited literature available. An outline is also given of adhesives commonly used to hang these wallpapers, which in some cases became an integral part of the wallpaper. 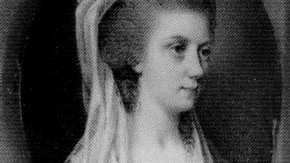 Early English miniature portraits were painted in water-colour on parchment. The replacement of the parchment ground by ivory in the early eighteenth century posed many technical problems for the artists who adopted it. Unlike parchment, ivory is non-absorbent and inherently greasy, and is hostile to the application of water-colour. During the eighteenth and early nineteenth centuries several new pigments were developed as replacements, either for those which, like lead white, were unstable in water-colour, or were expensive, such as ultramarine.

The long term stability of portrait miniatures from this period is a major concern for the conservator for, as well as fading if exposed to light, they can also split and become mouldy if incorrectly stored. The number of artists working in this field, and the volume of work produced, increased from the middle of the eighteenth century resulting in many unsigned works which are difficult to attribute to particular artists. This study collates information from printed texts of the period, together with letters from the artists Andrew/Robertson and George Chinnery and the manuscripts of the innovative William Wood, to discover how the ivory sheets were treated prior to painting and which pigments and media were employed.

Scientific analyses of white and blue paint from the palettes of Richard Crosse, George Engelheart, and the lesser known Henry Burch confirmed the usage of particular pigments, and indicated that pigment manufacture during this period was a far less exact process than had previously been thought. A knowledge of the treatment of the ivory, the formulation of the media employed and the pigments used explains why these miniatures are so sensitive to the conditions in which they are stored. An examination of a number of artists' works shows '' how each adapted their technique to overcome the problems generated by the ivory support and indicates some areas which may be exploited in the future to aid in the attribution of miniatures.

This thesis demonstrates how photographic prints can be analysed qualitatively and semi-quantitatively using air-path EDXRF analysis and sets out a method for fully quantitative EDXRF analysis. This research justifies the use of EDXRF for the identification and analysis of photographic prints. The first half of the thesis explores the use of EDXRF as an analytical technique and shows its advantages and limitations in the study of print processes. The criteria for analysis are specified and the assumptions which were used in the study of the objects are explained. The research is concluded by a series of five case studies. These were performed to demonstrate the procedures set out in the first half of the thesis and to highlight the various applications of EDXRF in the study of photographic prints. Qualitative EDXRF analysis of prints allowed photographic processes to be determined rapidly and accurately. Semi-quantitative analysis of prints was achieved using peak intensity ratios (PIRs). The theory behind PIRs an why this method of spectral analysis was used for the analysis of the prints is explained in Part II of the thesis. Part III demonstrates how PIRs were used in practice for the semi-quantitative analysis of photographic objects. PIRs allowed comparisons to be made between the elemental composition of different areas of a print and, to a lesser extent, between prints. The use of PIRs rather than net peak intensities helped to compensate for variations in X-ray source output and geometry.