During last year two trips were made by members of the Stained Glass Section to different destinations in Eastern Europe. Stained Glass Conservation is still very much in its embryonic stage in parts of Eastern Europe and in this article we hope to give some indication of the diversity and scale of the problems faced.

A study of stained glass in Poland

In March 1993 I had the opportunity of visiting Poland for 2 weeks to undertake a study tour observing stained glass in churches and museum collections. The objective of the tour was to initiate discussion on a wide range of problems experienced in stained glass conservation and was also seen as an opportunity to discuss techniques and exchange ideas and information. In this article I intend to highlight some of the more important aspects of my trip.

My first week was spent in Krakow, the ancient royal capital and a city containing one of the most important churches in Poland. 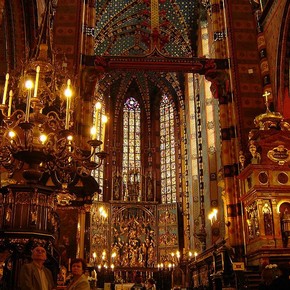 Mariacki (St. Mary's) is one of only 2 churches throughout Poland containing medieval stained glass windows. There are 120 panels intact within the church, all dating from c.1370. Unfortunately they have all suffered severe deterioration especially to their outer surface, due to the high levels of air pollution in Krakow. An important programme has just begun aimed at protecting this important and valuable glass.

The programme involves the installation of secondary protective glazing over a 3 year period which will act as permanent protection for the stained glass. Environmental monitoring will play an important role in this project. Sensors will analyse relative humidity and temperature for both the protected and the unprotected glass. This important information will help scientists to establish a safe and secure environment for the long term stability of the glass.

My second week was spent in Wroclaw in Eastern Poland where I spent my time observing museum collections.

The National Museum of Wroclaw and the Museum of Architecture both have modest collections of stained glass. A few of these are on display but the majority are held in extremely unsatisfactory storage. Both museums are acutely aware of the problems of their inadequate storage and are waiting for funding to undertake urgent conservation of the glass and initiate new systems for the glass to be safely and securely maintained. There is a serious lack of resources and materials available. Only recently has information become obtainable on materials which have been approved for conservation use and all of these are from abroad. Any goods manufactured in Poland have not been tested and their composition is unknown.
There are few training institutions for conservation in Poland. The Academy of Fine Arts in Krakow offers training in Organics, comprising Easel Painting and Polychrome Sculpture, and Inorganics, comprising Wallpaintings and Architectural Sculpture, over a six year period. A similar course is run in Warsaw, and in Torun there is the only opportunity to study Stained Glass Conservation, alongside
Ceramics, Metals and Stone over a five year period with specialisation as a conservator or a curator.

The trip to Poland was an invaluable experience both personally and professionally. I am particularly grateful to Pawel Karaszkiewicz and Slawomir Oleszczuk for donating so much of their valuable time and making me feel so welcome.

At the invitation of The Regional Institute for the Protection of Cultural Monuments in Croatia, during the late summer of 1993, I travelled to Osijek, capital of Slavonia in eastern Croatia. The purpose of the trip was to determine the damage caused to more than forty stained glass windows in Osijek's main Church, St Peter and Paul, often referred to as the "Cathedral" because of its size and position in the centre of the town.

My travelling expenses were covered by the British Council and I stayed as a guest of the priests in their residence adjoining the church. Built in the late nineteenth century in the Victorian Gothic style, the church exterior and interior were seriously damaged during the attacks upon Osijek beginning in Autumn 1991 and lasting well into mid 1992. Osijek is very close to the occupied territories of Croatia and is surrounded on three sides. While I was there explosions and gunfire could still be heard from the frontline 3km away.

The church took over one hundred direct hits completely destroying a number of stained glass windows and severely damaging many others. Damage limitation measures have since been taken such as protective wooden barricades over the remaining windows to prevent flying shrapnel. Fragments from some of the worst damaged windows were retrieved by locals immediately after the shelling, the majority of which I was able to document and store for possible future restoration. The storage area had not only to be well protected but also dry. Considerable damage occurred in this country to glass removed, ironically for protection, and stored in damp church basements during the Second World War.

The practicalities of restoring the bomb damaged stained glass are difficult not only because of the enormous costs but also because of the uncertainty of the current situation in the Osijek region, at the moment there is no question of even erecting scaffolding. In the meantime efforts to raise finances has begun in preparation for future work.

Croatia currently has no qualified stained glass conservators and no training facilities. Removing the damaged windows and transporting them to workshops in other countries would be a mammoth task. Clearly alternatives had to be considered. Plans are now underway for a stained glass workshop based in Osijek. Premises have already been found and it is hoped in the future that trained specialists may visit the workshop to help with restoration and to train suitably qualified people. This will avoid large scale removal and allow work to be carried out as and when money becomes available. An established stained glass base would not only provide the facilities to train conservators for the future but could also take on work from other churches in the region.

During my return journey I met Mario Braun Head of Objects Conservation at the Artwork Restoration Institute in Zagreb who, during a tour of the conservation studios, described the huge range and disastrous scale of damage mainly to paintings on canvas and wood, altarpieces and furniture. The war has impeded efforts to properly establish training schemes in Croatia for conservators. Mario Braun and conservators that I met in Osijek museum have ambitious plans for the future to rectify the lack of training opportunities. At the moment, they are confronting severe damage to historic sites, monuments and objects on a colossal scale with limited means. They are extremely resourceful but faced with little funding, limited personnel, lack of materials and information, are rapidly becoming overwhelmed and in desperate need of international help.