Measuring pollution in the museum environment 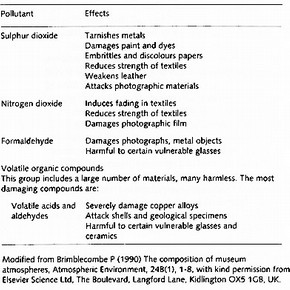 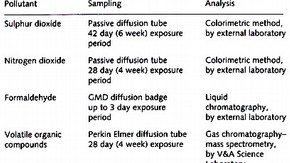 For the past 18 months the V&A Science Group has been collaborating in the European Union-funded AMECP (Assessment and Monitoring of the Environment of Cultural Property) project. The aims of this project are two-fold:

1.To identify and quantify pollutant chemicals in cultural property environments.
2.To develop a glass-based sensor to facilitate the assessment of these environments.

To carry out the first aim, in March 1994 a programme of systematic pollution monitoring was begun at sites in Germany, Portugal and Great Britain. The intention is to monitor continuously for a period of twelve to eighteen months, the pollutants being sampled onto passive diffusion tubes, which are changed every 4-6 weeks. The pollutants selected for study are sulphur dioxide, nitrogen dioxide, volatile organic compounds and formaldehyde. These have been chosen because of the dangers they present to cultural property (Table 1).

Passive samplers have a number of features that make them suitable for a project of this nature. First, they are small and need no power supply, and so can be placed unobtrusively in galleries, display cases and storage areas. They have a very slow uptake rate, making them ideal for long-term sampling periods of several weeks. This in turn means that the data collected are long-term average values. In the context of the Museum collections, exposed to the same environments for many years, this is more relevant than taking short-term spot readings, which may not reflect the environment in the long run. Table 2 lists the pollutants sought, with the sampling and analysis methods used.

Results of pollution analysis at the V&A 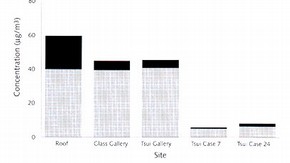 Although monitoring has been carried out at sites in Portugal and Germany as well as in Great Britain, because of lack of space only data from the V&A will be discussed here. Figures 1 and 2 show, respectively, the concentrations of inorganic (sulphur dioxide and nitrogen dioxide) and total volatile organic compounds (TVOC) and formaldehyde pollutants at five locations at the V&A, averaged over the period March-September 1994.

The sampling sites were chosen to give a variety of museum environments. The Conservation Department roof was used as an external monitoring site. The Tsui (G44) and Glass (G131) Galleries were monitored to give an indication of air quality at two different sites within the Museum. Two display cases in the Tsui Gallery were monitored to see what pollution levels were like at what for many objects is their point of interface with their environment. The display cases in this gallery are of fairly recent construction (installed 1991), and are designed to seal very tightly. We were interested in how this design would affect the environment within. 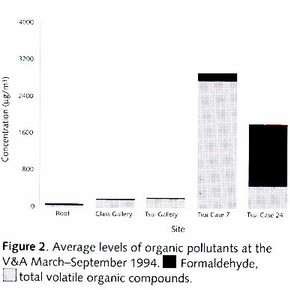 From Figures 1 and 2 it is apparent that pollution levels vary considerably, depending on the particular environment. The highest sulphur dioxide value is on the roof, with the levels in the galleries about a third of the external value. The amounts of sulphur dioxide found in the two cases are very small indeed. Nitrogen dioxide has a different distribution: the gallery concentrations are similar to the roof concentration. As with sulphur dioxide, very low levels were found in the display cases.

The organic pollutants behave in opposite fashion to the inorganic ones. Very high TVOC and formaldehyde levels occur in the display cases, compared with much lower concentrations in the galleries and outside. This behaviour can be explained by considering the sources of the different pollutants. Sulphur dioxide and nitrogen dioxide come mainly from external sources: sulphur dioxide from fossil fuel combustion and nitrogen dioxide from motor vehicle emissions. As would be expected, therefore, the highest concentrations of these materials are found outside the Museum, with lesser ones further into the heart of the building.

The organic pollutants, on the other hand, come principally from internal sources: paints, varnishes and other surface coatings; solvents, sealants, carpeting, textiles and wood. These are the types of materials often used in display case construction, hence the very high TVOC levels observed in the cases examined. It is probable that most of these compounds are harmless to the collection - they are relatively inert hydrocarbons. Some, however, can be extremely destructive. The organic acids, given off by wood, varnishes and adhesives, are extremely damaging to metals. Formaldehyde is another internally generated pollutant, being emitted by foams, adhesives, cardboard and fibreboard. It can harm metals and glasses. One of the cases examined had a very high formaldehyde level, of 1300 micrograms per cubic metre (1 microgram [µg] = 1 millionth of a gram), a typical indoor level being 10-20 µg/m3o. Fortunately this case contained only textiles, which are unaffected by formaldehyde.

What pollutant concentrations are acceptable?

Pollution exposure limits have been set for human health (e.g. COSHH - Control of Substances Hazardous to Health Regulations 1988); some recommendations have been made for the storage of metals in wooden cases 1  over relatively short periods. However, in the museum environment it is very difficult to decide at what level a pollutant becomes a threat. This is because of the prolonged exposure period, which may be measured in decades. Over such a time span, even quite low concentrations may be dangerous. Although experiments have demonstrated the damage caused by high levels of pollutants 2,3 , there is little published on the effects of the much lower levels realistically found in the museum environment.

Despite this lack of data, ambient pollutant limits have been put forward, based either on experience, or what is technologically achievable. Thus, Thomson 4 has suggested for sulphur and nitrogen dioxides that the concentrations should not exceed 10 µg/m3. The US National Bureau of Standards has made even more stringent recommendations of less than 1 µg/m3 sulphur dioxide and less than 5 µg/m3 nitrogen dioxide for archival storage conditions 5 . For the organic pollutants, even less is known, though work by Grzywacz and Tennent 6 has reported damage to vulnerable materials at levels of 50-100 µg/m3 acetic acid. Clearly, there is scope for more research in this area, and as yet no hard-and-fast rules can be applied.

From this survey it is apparent that the Tsui display cases were effective at keeping out the inorganic pollutants sulphur dioxide and nitrogen dioxide. In the two cases examined, the levels were below the limit suggested by Thomson. They were equally effective at keeping in high levels of internally generated organic chemicals, including the damaging aldehydes and acids. However, it should be possible to prevent damage by organic compounds by appropriate choice of materials for display case construction: the avoidance of wood and careful selection of surface coating and sealant compounds.

The AMECP project has a further 18 months to run. In this time we intend to investigate the pollutant levels in a wider range of museum environments 7 . Display cases of different age; construction materials; contents and lightness of seal; and storage environments - cupboards, stacks, drawers - will all be examined. In the long-term it is intended to use the knowledge gained to advise on the types of construction materials to use to avoid damage from internally generated pollutants.