During the mid to late nineteenth century, various museums in Britain were establishing photographic collections of fine art, which were intended to supplement book illustrations and encourage a knowledge of art. Among these was the South Kensington Museum, later the Victoria and Albert Museum.

Photographers, including Charles Thurston Thompson and Fred Hollyer, were commissioned to record paintings, frescoes, murals, textiles and works of art on paper from collections around the world. These were predominantly European, but also Russian, American and oriental. Photographs were donated to and also bought by the Museum. The intention was to supply schools of art and members of the public with authorised, inexpensive reproductions of works of art. The negatives were kept on file, with probably one print being made for reference purposes, and further photographs being printed up as required.

When Mark Haworth-Booth became the Curator of Photographs in 1977, he carried out a survey of the art historical collection of photographs then stored in the crypt of the V&A. It was found that the objects dated principally from the nineteenth century and gave an indication of the contemporary taste in art, particularly of the Renaissance. The photographs represented important documentary evidence of the collections that they recorded, especially as it was possible that some of the collections no longer existed in that particular form. Owing to lack of storage facilities, the photographs, photomechanical prints, albums and books which now form the "Essex Collection" were offered on long loan to the University of Essex. In 1978 the collection, which totals about 250,000 images, was sent to the University for teaching and research purposes. It was contained in metal filing cabinets, solander boxes, portfolios and boxes, and was insured for £10,000. 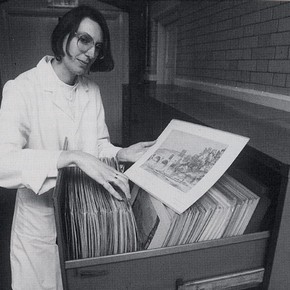 This first part of the collection numbered 11,291 objects of which 8,718 are photographs and 2,573 are photomechanical prints. It includes reproductions of oil paintings, watercolours, drawings, textiles, frescoes, prints and a number of letters and verses. Some of the images contain accompanying inscriptions by the artist. The majority of the objects cite the name of the artist, the date and country, the title and sometimes the subject of the work of art, and the collection it came from. The objects are stored vertically, landscape, in metal filing cabinets of three or four drawers.

The objects have been mounted on support paper or board, or in albums or books. The photographic processes include albumen prints, carbon prints, salted paper prints, platinotype, gelatin printing out paper, silver gelatin and matte collodion printing out paper which has been toned with gold and platinum. The photomechanical prints include photogravure, collotype, letterpress half-tone and half-tone offset lithography.

The majority of the objects are in good condition, although all have suffered from surface dirt to some degree and about a tenth of the collection has damage to the image or support. The main problems of the photographic images appear to be fading and tarnishing. The poor quality of the support papers and boards has led to degradation and embrittlement, which has been exacerbated by the storage, specifically in the four-drawer cabinets which are barely deep enough for the objects. This has caused two major problems. The first is that the objects cannot be stored completely vertically, resulting in a concave bowing of the supports, a problem which is worsened on the albumen prints by the tension of the albumen layers. The second, more serious problem, is the scraping of two edges of the supports as the drawers are opened and closed. This has led to breaking and fracturing of the supports, particularly those at the front and back of the drawers which are the least protected. 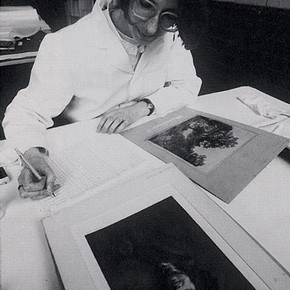 The treatment of the objects concentrated on the removal of the surface dirt and the protection of damaged objects. After documenting the condition of the image and support and identifying the process, each object was gently brushed with a brush suitable for use with photographs. Only the support was mechanically cleaned with Wallmaster Drychem Sponge EA3601TM as, on testing for sulphur residues, it was found to be unsuitable for use with photographs. The objects were then replaced, in alphabetical order, back into the cleaned filing cabinet drawers. Any damaged objects were placed in MelinexTM sleeves for protection, while a book of photomechanical prints was rehoused in a custom-made manila folder. The platinotypes and the platinum toned matte collodion printing out papers were interleaved with Silver SafeTM 40g/m2 paper in order to alleviate the problem of image transfer, caused by the presence of platinum.

The work on this first phase of approximately 11,000 took ten months to complete.The objects are now to be stored in the new basement storage areas of Blythe House. It is possible that some of them may be included in a proposed exhibition scheduled for Spring 1996. The rest of the collection is being recalled in phased stages from the University of Essex, necessitating an ongoing programme of conservation treatment.

I would like to thank Elizabeth Martin, Senior Conservator, Photographs and Mark Haworth-Booth, Curator of Photographs, for background information on the collection.