Conservation of the Portuguese Centrepiece 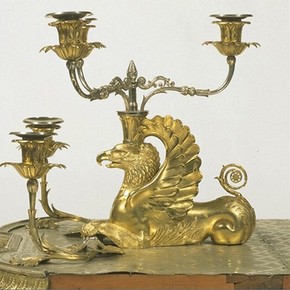 The Centrepiece from the Portuguese Service (Museum number WM 745- 1948) at Apsley House is the largest precious metal object in any of the V&A's collections, measuring 8.03m in length and 1.07m wide. More significantly, it is one of the most important examples of Neo-classical silver ever made in Europe. It has recently undergone complete conservation to coincide with the refurbishment and reopening of Apsley House in June 1995.

The Portuguese Service includes hundreds of items of silver and silver gilt tableware, from cutlery to enormous tureens, designed to be arranged around the awe-inspiring Centrepiece. This comprises twenty-one plateaux arranged singly or in threes, each bearing fantastic beasts, allegorical figures, columns and other symbols of military victory in the traditional classical style. (Figure 1).

The Portuguese Service was presented in 1816 to Arthur Wellesley, 1st Duke of Wellington, to honour him for leading the armies of the Triple Alliance (Spain, Portugal and Great Britain) to victory against the French forces of Napoleon in the Peninsular War (1808-14).1 All the triumphant battles are featured in the Centrepiece in chronological order. 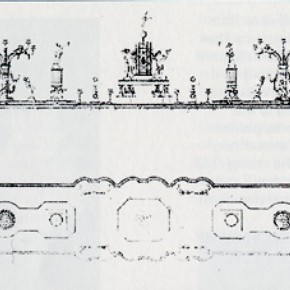 The Portuguese court painter Domingos Antonio de Sequeira was responsible for the design and execution of the Service. Incredibly, this was Sequeira's first commission for a design in metal of any kind. The project began in 1813 and was completed in 1816.

The amount of silver required for such a vast creation was immense. It was acquired by melting down Spanish and Castillian coinage, but resulted in a crippling expense for a country ravaged and impoverished by war. The production of the Service was carried out by a sizeable workforce of specialists in fine metals and weapons manufacture, many of whom had been employed at the Government Arsenal. Much of the work was executed at Sequeira's home or in neighbouring workshops.

The Centrepiece arrived in London for the formal presentation to the Duke of Wellington late in 1816, apparently after a rough sea crossing. This is borne out by the unfortunate level of damage recorded in a rare condition report dated 14 October 1816 made on arrival by Vincente Pires da Gama.2 Some parts had become twisted, squashed or bent. All the pieces belonging to the service were tarnished to some extent because of the damp, and the plates that cover the plateaux were scratched in the places where the fragments of the pieces were twisted. Records dating from the 1820s also indicate that further repairs and additions to the Centrepiece took place, and were executed by the Silversmiths, Rundells and Garrards.

All this information helps to explain why, throughout its time at Apsley House, the Centrepiece has presented something of a challenge in terms of maintenance and handling. The very nature of such an unwieldy yet vulnerable object made in silver and gilt means that it is frequently going to require cleaning and repair of a sympathetic nature.

The Centrepiece was acquired for the nation in 1948. It is permanently displayed on the original mahogany dining table designed to support it. During the 1st Duke's day, it was placed out only for ceremonial and formal occasions, but since then it has been exposed continuously to dust and airborne pollutants. Consequently it has always needed a protective coating of lacquer to slow down the development of tarnish. The use of any kind of display case or cover has been ruled out on aesthetic and practical grounds.

Records and recollections from conservators indicate that the object has been completely dismantled, and thoroughly 'overhauled' only three times between 1953 and 1970. Partial cleaning and significant repairs to broken limbs on figures, candle arms and wreaths were undertaken throughout that period, most recently in 1974, 1976 and 1978. Some remedial, localised cleaning was carried out in 1992 before the photography for the publication of the book by James Yorke1  but the need for complete conservation was still evident and well overdue.

The refurbishment of the exterior and interior of Apsley House was the perfect reason for full conservation work. Planning the project was not without its complications. Because of the need to pack all the contents of the house in March 1993 in a limited time, it was not possible to complete a detailed condition report on the Centrepiece before it was crated for storage. This meant that an accurate estimate of the full amount of work required could not be made. However, there was an awareness that each plateau varied immensely in construction and condition.

Only when work began on the Centrepiece in September 1993 (on the plateau from each end) was it possible to estimate the time required. Fortunately at this stage the initial project was overseen by Kenneth Turner who had had the opportunity to work on the object three times in its entirety, and many more times in part, since 1953. His familiarity with the construction techniques used, as well as with the many previous repairs, security fixing methods and earlier replacements, was of enormous benefit. He supervised two assistant conservators who had never previously worked on the object, in dismantling, cleaning, partial repair and reassembly of the first four plateaux.

There was continuous pressure on all working on this lengthy project to meet the opening deadline of mid-June 1995. The number of people involved increased as the deadline approached. Initially one person would complete a single plateau, but it was often more productive and less monotonous for the conservator if at least two people worked on each. The largest plateaux were dealt with by up to five people.

The Metalwork Conservation Section could not accommodate more than three or four plateaux at any given time. This meant that generally three plateaux would be delivered from storage and have treatment in the studio. Each would then require repacking to avoid any damage or abrasion to the newly lacquered surfaces and was placed back in storage until the installation time. When repacking, an image of the completed plateau, with details of where it was positioned, was placed on the exterior of the crate. 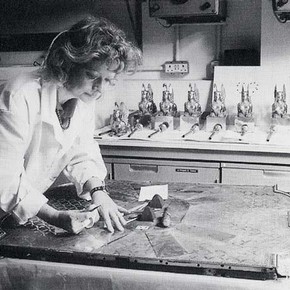 Fig 2. Dismantling the base of the central plateau by removing silver panel pins (click image for larger version)

1. Each of the plateaux were condition assessed, and notes were made on the surface condition, the location and nature of old repairs, and structural damage.

2. Each plateau was systematically dismantled: this had to be undertaken with great care and method, to record precisely where plateau pins were missing or were distorted. The position of each element was recorded diagrammatically. It was imperative that any nut, bolt or edging once removed was placed in the same position, as worn threads and distortions result in fixings not fitting on the adjacent bolts.

3. The surface condition varied enormously from faintly discoloured, where lacquer coating was intact, to completely blackened by tarnish where no trace of lacquer remained. There was a high level of scratching, blackening and distortion to many areas.

4. The surface was uniformly cleaned with acetone on swabs. Many pieces were immersed and washed over with solvents. Frequently this process was lengthy because of the very dimpled, decorative nature of the surface and the degradation of the lacquer.

5. PVAC (polyvinyl acetate) adhesives had been used on many areas to repair and secure certain sections. The old adhesive was removed by soaking in hot water and by careful mechanical removal.

7. Removal of tarnish using Goddards Silverdip was highly effective except where there was residue of lacquer or in some cases old cleaning polishes left from previous cleaning. Sometimes lacquer had been applied over existing dirt and tarnish. Small stipple and bristle brushes were used sensitively to help with this process, then carefully rinsed with water and dried. Final polishing if necessary was with a Goddards impregnated silver cloth.

8. The finishing process involved thorough degreasing of the surface with acetone. It was critical to produce a completely grease-free surface; therefore many litres of solvent were required.

Finally an application of Frigilene lacquer was meticulously applied, using large, soft haired brushes of sable or ox hair mixture. This completely covered all areas of the metal, including the underside of plateaux, trims and the heads of hundreds of silver pins. Two to three coats were preferable on many areas, especially the silver sheet plateaux which will tend to receive more wear from dusting.

Reassembly of each plateau took even longer than dismantling because such care was required both to protect the components from any additional strain and to avoid any flexing or even slight abrasion, which could damage the protective lacquer or, worse, graze the metal itself. The threads on some of the screws were found to be very worn and could not be adequately tightened without the addition of washers or padding.

There was considerable effort required to dismantle and reassemble certain elements. In the case of the two palm candelabra, each had twelve palm branches interspersed with a candle arm. These had all been incorrectly reassembled, and many were very distorted and had old repairs, as well as missing and broken fronds. These took a total of five hours to dismantle, yet less than half that time to reposition. The task was made more awkward because of the spiky, flexible nature of the palm branches which tended to catch on clothing and to become entangled with each other.

9. The supporting timber panels were in sound condition apart from minimal splitting in limited areas. Any dust or old silver polish accidently deposited was removed by dry brushing, or, if particularly heavy, with Stoddard solvent. 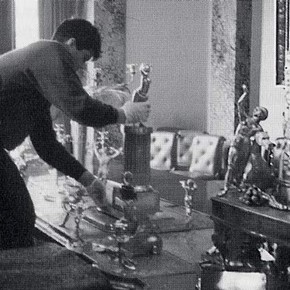 This was a particular problem when there were two matching plateaux from either side of the Centrepiece that had had battle plates or components incorrectly positioned in the past. Because they could not be worked on simultaneously, the re-arrangement of these components - even whole plateaux - took place during final installation at Aspley House.

Good team work was an essential contribution to the successful completion of this project. This team effort could not be better illustrated than by describing the final installation which took place over four days. The entire Centrepiece was unpacked and placed on a surface in the room adjoining the dining room. The central plateau needed to be carefully placed accurately in position, in alignment with the overhead chandelier. This was no mean feat as it took six people to lift it onto the table, and its position had to be measured very accurately to avoid the rest of the plateau going askew. Adjustments to the position were made with the help of thick felt pads to protect the table surface. Working outwards from the centre, each plateau was placed in order to complete the display. This required a team of four to five people actually kneeling on the table. 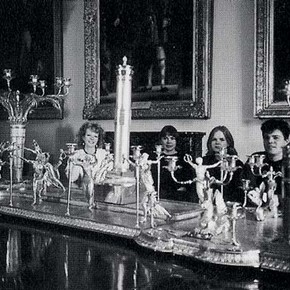 This considerable project, which took nine conservators, as well as packers, curators and object handlers, 1700 hours, was completed in time for the opening.