Time is the most valuable resource available to the conservator. It is required to analyse the problem, to decide the treatment and to carry out the process. Time has also to be balanced against other factors, for example costs and the reasons why the conservation work is being carried out. Why does this object require treatment? Is it going on exhibition, where it may only require minimal treatment to ensure safe travel and secure display, and be put into storage on return to the Museum? Or is it to be displayed in a gallery on a permanent basis? If so, the opportunity to work on it again may be difficult.

The demands on a conservator's time often make it very difficult to justify working on one object over a period of years, and increasingly major projects become a joint effort or even the work of an entire Section. Students and interns are often given the opportunity to work on some of the longer term projects with permanent members of staff. Often these projects offer a unique opportunity because of the type of object, its historical significance, the method of manufacture or the treatment that is being used. 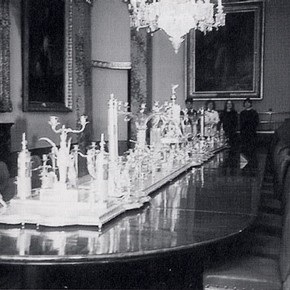 An object worked on by a number of different hands, over a period of time, can sometimes result in some discrepancy of approach. The 'team' approach to conservation is often difficult to achieve. Most conservators work best on their own, developing their own style, even with a technique that is widely used. The difficulties of joint projects are twofold: either the conservator is taking over a project that was begun by someone else, as in the portrait bust of Giovanni de'Medici, later Pope Leo X, or the project is of a monumental scale, as with the Portuguese Centrepiece for Apsley. With either approach the documentation is vital.

Most conservators who take over the conservation of an object started by someone else often encounter difficulties finding out exactly what has been done to the object. This is not a criticism of previous conservation approaches, but more a recognition of how we are advancing our systems of recording our treatments. This not only means documenting what treatments have been used but also includes a demonstration of our compliance with CoSHH (Control of Substances Hazardous to Health) and other health and safety regulations. It also means that we now have to question some of the processes that we take for granted and find alternatives to these techniques if they pose any health and safety problems. With the development of the Conservation Department's documentation system, many of these issues can be addressed. Extending the computer network system, as we are doing, will enable us to compare, exchange and collate information in a cohesive way that has not been possible before.