The Conservation of a Fourteenth Century Chasuble

In October 1992 I was asked to complete the conservation of a fourteenth century chasuble, one of the earliest continental chasubles in the Museum's collection. 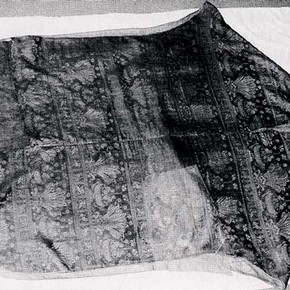 Chasubles are worn by officiating priests during the celebration of mass. This chasuble (Museum No. 8359-1863)originates from the Marienkirche, Danzig. It was offered to the Museum for sale in the nineteenth century by Dr Bock, a German collector of mainly ecclesiastical objects, whose important collection is now scattered throughout museums and collections worldwide.

The fabric for the chasuble was woven in Lucca, Italy and dates from about 1380. It is a lampas weave (see footnote ), and predominantly green in colour. There are designs of birds, animals and palmettes brocaded in pink silk thread which have faded to yellow on the face of the chasuble. The chasuble also has inscriptions in fake Kufic script which are unintelligible, but which possibly explain the misleading attribution of the silk in the registered description as Syrian or Saracen.

The chasuble is composed of four lengths of fabric. There is one width of fabric on either side of the central seam. These are stitched along the selvedges at the centre front and back and cut and shaped at the shoulders, with small triangular pieces making up the ends of the shoulder. The bottom edge of the chasuble has been rounded to produce a bell or conical shape.

During consultation with Linda Woolley, Deputy Curator, Care and Access, Textiles, Furnishings and Dress Collection, it was speculated that the chasuble might have been constructed from two widths of fabric either side of the central seam, four in all, and cut down before acquisition by the Museum. This would possibly explain the exaggerated slope of the shoulders and the small triangular pieces of fabric at the ends of the shoulder slope. 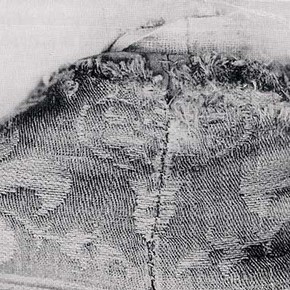 Detail before conservation showing damage to the back of neck. (click image for larger version)

There is extensive wear across the front and around the neck opening. A large section was missing from the proper right front which had been replaced with a piece of green painted linen. It had patch repairs made of a similar lamps weave fabric, painted patches, and numerous old stitched repairs and darns. The chasuble has a linen lining which is turned over one centimeter onto the front surface to finish off the raw edge. The lining was badly damaged with numerous holes, some quite large, which had also been patched with linen. It has been suggested that the larger holes may have been caused by rodents.

The chasuble was just under half way through its conservation treatment when I took over the project in 1992. The work had started in 1987 but, as it was not a high priority project, it was put on one side when other objects came into the Section for conservation for exhibitions and loans. 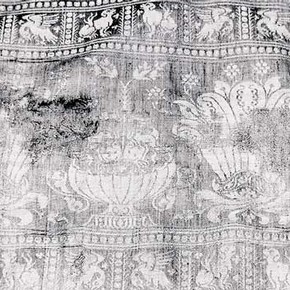 During 1987, after careful examination, the chasuble was surface-cleaned and the painted patch and other patches and repairs were removed, including a repair thread which bled during the wet-fastness tests carried out before wet cleaning. The chasuble was then wet cleaned. This could have been a problematic process owing to the silk on the face and the linen lining since the two fabrics have different drying and shrinkage rates. It was not possible to separate the two layers and wet clean each separately as they were joined together with the original stitching. However, the wet cleaning proved successful and the chasuble was hung to dry naturally on a specially constructed skeleton hanger which supported the shoulders fully. MelinexTM (ICI) was used to separate the layers during drying to stop them clinging together and causing unnecessary distortions in the weave of the different fabrics (see reference for a more detailed account of the wet cleaning process).

Following wet cleaning, the choice of support fabric and method of conservation stitching were decided. The chasuble was then put into storage until 1992.

When I took over the conservation of the chasuble, a silk and wool mix support fabric which had a similar texture, weight and drape to the original of the chasuble was purchased. The choice of fabric was very important as there was such a large piece missing from the proper right front of the object. The support fabric would not only be acting in its usual supporting role, but also as a cosmetic infill which would not distract too much from the original fabric.

The support fabric was dyed using Ciba Geigy LanasetTM dyes for protein fibres. Laid couching with ScalaTM (Gutermann) polyester thread, was used for attaching the patches to the chasuble with a MelinexTM isolating layer to separate the lining from the main fabric. This layer made it easier to slide the patches into position and stitching much simpler as the curved needle slides on the MelinexTM . Some original seams had to be opened to allow the support patches to be placed inside. The ethics of this had been discussed with the curator responsible for this object. This is an issue that often faces conservators working on costume and one which can rarely be resolved without undoing original seams, although intervention is kept to a minimum. 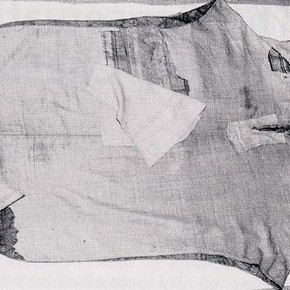 The main fabric of the chasuble was conserved first and then the whole object was turned inside out to enable the lining to be worked on. Any finishing, such as cutting the large patch at the front to the correct shape, was carried out afterwards. Again, support stitching, as previously described, was used for the conservation of the lining.

Having the object turned inside out enabled the patches to be correctly positioned. This time, the chosen support fabric was a linen fabric which had a similar weave and weight to the original. It was dyed using Ciba Geigy SolophenylTM dyes for cellulose fibres. Once the lining had been completed, the whole chasuble was turned back to the right side and the finishing was carried out.

To obtain the shape on the proper right front which was missing, a pattern of the proper left front was taken using tissue paper which was then reversed, pinned in place and support fabric cut to shape. The same procedure was applied to the lining although this was cut slightly larger to enable it to be turned and finished on the front surface. The whole chasuble was then stitched in a similar manner to the original side with a running stitch using MaraTM (Gutermann) polyester thread 70/3 which is a similar thickness and colour to the original. Although it would appear that the chasuble took six years to conserve, in reality it took only 380 hours. Owing to the demands on the Section for conservation to be carried out on objects for loans and exhibitions it is sometimes inevitable that objects can pass thorough more than one pair of hands. The conserved chasuble has now been placed back in storage but it is hoped it can be displayed in the future when there is a display rotation in the Textile Galleries.

Lampas weave as defined by CIETA vocabulary of 1964 is 'a figured in which a pattern, composed of weft floats bound by binding warp, is added to a ground fabric formed by a main warp and a main weft. The ground may be tabby, twill, satin or brocading wefts; they float on the face as required by the pattern, and are bound by the ends of the binding warp in ordinary tabby or twill which is supplementary to the ground weave'.