The Examination and Conservation of the Raphael Cartoons: an interim report 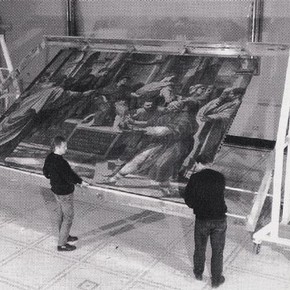 Figure 1: The Cartoon 'Blinding of Elymas' being moved into position on the metal easel (click image for larger version)

The refurbishment of the Raphael Gallery began in 1992. It was decided that the opportunity afforded by the refurbishment programme should be used to examine the seven Raphael Cartoons in order to assess their condition and to further our knowledge of their structure. For an account of the history of the Cartoons, including previous treatments, see Shearman 1 and Wagstaff 2 .

An initial examination of the Cartoons was carried out to assess their suitability for movement to another part of the Museum for temporary storage. The major area of concern was the vibration of the canvas against the stretcher which was noticed during the initial condition check and de-installation. This led us to consider the use of a cami-lining 3,4 or a similar solution to dampen these vibrations. In practice, however, it was decided that each Cartoon should be placed directly into its travelling frame as it was de-installed. This avoided a potentially risky operation and the travelling frames themselves reduced the vibration to a minimum.

An environmentally monitored secure storage area was specially constructed for the seven Cartoons while they awaited the completion of the refurbishment. This enclosed storage area was fitted with hatches so that regular visual checks could also be carried out.

A metal easel (Fig.1) was designed and produced to allow the Cartoons to be manoeuvred during examination. This easel can be used to hold a Cartoon at different angles between the horizontal and vertical and to raise and lower the Cartoon. These manipulations can be done relatively smoothly thus avoiding setting up vibrations in the Cartoon. A wooden A-frame is also used to hold one of the Cartoons, still in its travelling frame, during examination. This means that, at any one time, two Cartoons are available for examination.

A number of techniques are being used to obtain as complete a picture of the Cartoons as possible. This should further our understanding of the materials, techniques and structure of the Cartoons and will also form the basis of the documentation describing their current condition. Techniques being used include raking and transmitted light examination, UV examination, infra-red reflectography, X-radiography and photogrammetry. Josephine Darrah, Senior Scientific Officer, Conservation Department, is also taking and analysing pigment samples. One of the most useful of the techniques employed so far has been raking light. To cover such a large area in detail involved taking six overlapping photographs which could then be assembled as one. A four metre high camera stand was specially purchased to facilitate this and other examination techniques. 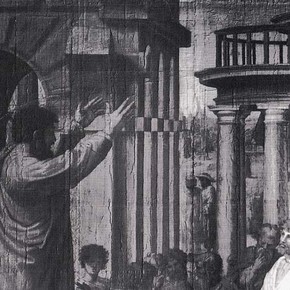 This technique gives a clear indication of creases, tears, cuts and areas of loose paper (Fig.2). Quite significantly, raking light also revealed the presence of a 'bulge' some 7-9cm on either side of each working join (each Cartoon was cut up into a number of strips to facilitate the initial weaving process; the strips were reintegrated by lining onto canvas in 1697). The discovery of the bulge, backed up later by transmitted light and X-radiography, led to a close examination being made with the naked eye. This examination seems to indicate that each strip of cartoon was strip-lined on all four edges with a fine canvas some 7-9cm in width. This must have been attached either at the time of, or before the restoration work of 1697.

The strip-lining may have been the means by which the Cartoon strips were handled and temporarily butted together for copying and viewing during the 17th century. This seems to be confirmed by the further discovery that, at each working join, the left hand vertical strip of canvas usually seems to extend a couple of centimetres beyond the edge of the Cartoon so that it 'underlaps' the right hand strip of Cartoon on which the edge of the strip-lining coincides exactly with the edge of the Cartoon. There were also a series of pinholes, which from their consistency of location (at the point of butting together of the Cartoon strips) could indicate that, when displayed, the Cartoons strips were held in place by pinning through the narrow 'underlap' of strip-lining at each working join. This is an important discovery since it had previously been thought that this fine canvas could have been an overall layer that may have been attached by Raphael. This no longer seems to be the case. 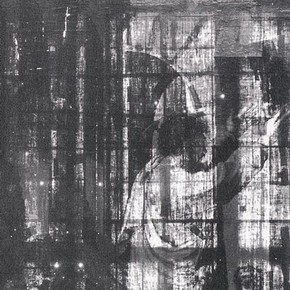 This was the first time the Cartoons had been examined using transmitted light which proved to be the most effective technique in helping to reveal the structure of the Cartoon (Fig 3). The image produced is somewhat complicated by the presence of the stretcher bars and the cross bars of the metal easel. However, quite regular patterns of overlapping sheets of paper are clearly visible. The pattern of the canvas is also visible, along with the seams. Numerous patches can also be seen, which must have been put on before the lining with canvas in 1697. Whether or not these repairs were done in the same restoration campaign is open to conjecture.

The most important finding from the transmitted light examination was that there is only one layer of paper. The overlaps of these sheets show clearly as a regular mosaic. Examinations in the past have focused on the layer structure partly visible to the naked eye at areas of damage and working joins. This has obviously misled people into believing there were a number of layers of paper present, whereas these areas had been repaired.

Photogrammetry was used to plot and measure the overlaps of the sheets of paper, the position of the working joins and any other cuts. This made it possible to measure the size of every sheet of paper used to make up the Cartoons without having to risk touching the surface in taking measurements by hand. When one considers that each Cartoon consists of up to 200 sheets of paper, the benefits of this particular technique are immediately obvious.

The only disadvantage is that sometimes the operator cannot always readily distinguish some details from the stereo photograph. For example, because of the paint layer, it is not always perfectly clear which way the paper sheets are overlapping. To resolve this the operator needs to verify some details on site with the help of the conservator.

Results so far obtained indicate that the Cartoons were constructed using sheets of paper that had had their deckle edge removed and were some 29 x 42cm (11 x 16in) in size with regular overlaps of 1-2cm. The sheets are mainly laid down portrait style but some smaller areas are completed landscape style. Earlier analysis had shown that the paper was linen rag. The relatively thick overall paint layer and the canvas backing makes it impossible to see any watermarks or laid lines.

Photogrammetry is also being used to measure the depth of the bulge which is present in the bottom corner of the Cartoon 'Blinding of Elymas'. Theoretically this measurement could be retaken in the future to note any change. 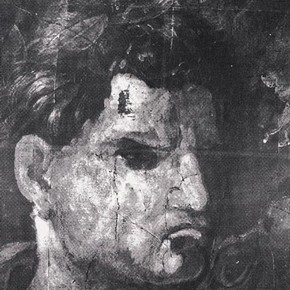 For various reasons, such as cost and time, it was decided that complete X-radiography of only the Cartoons 'Christ's Charge to Peter' and 'Healing of the Lame Man' would be taken. For the other Cartoons, selected areas (including all heads) would be taken. The results so far are extremely useful. The X-radiographs (Fig.4) show many details, for instance craquelure and paint loss (often concealed to the naked eye by retouching) the pricked holes (these relate to the copying of the Cartoons) and areas of pentimenti.

The underdrawing is quite strong in the Cartoons and in many areas is visible to the naked eye. However some areas of underdrawing show up more clearly using infra-red reflectography, for instance the buildings in the landscape of the Cartoon 'Christ's Charge to Peter'. This method of examination may help to show the initial technique and areas of pentimenti. UV examination proved useful as an initial aid to pigment analysis. Interesting areas of fluorescence could be chosen for further analysis. It also revealed the presence of a possible glaze in the shadow areas of different pigments on several of the Cartoons which appeared as a green fluorescence. UV examination also revealed the location of old retouchings and repaintings.

From the above series of examinations and close visual examination it has been possible to produce quite comprehensive documentation of the present condition of the Cartoons. This has been facilitated by using overlays on the raking light photographs. Image manipulation using a graphics package on a computer is also being looked into. There are many areas of old damage on the Cartoons including creases, tears, splitting along pricking holes, craquelure and pigment loss. This is not surprising considering their history. However, despite appearances, the Cartoons, though damaged, are quite stable. Only limited treatment as described below was necessary. 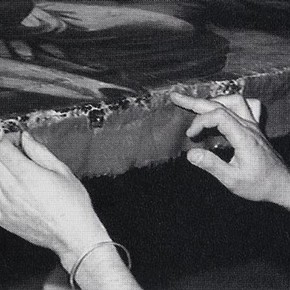 Figure 5: Consolidation of the edge of one of the Cartoons using Japanese paper (click image for larger version)

Interventive treatment has been kept to a minimum and so far has revolved around the consolidating of loose areas of the Cartoons. This work involved:

1. Surface cleaning of the stretchers and back of the canvas.
2. Re-attaching loose areas of paper using methyl cellulose. This involved two conservators, often working from library steps, one at the front of the Cartoon and one at the back. The conservator at the front would apply the adhesive and press loose areas into place using hand pressure against the resistance provided by the other conservator holding a piece of Plastazote (Polyformes) at the back of the Cartoon.
3. Reinforcing the extreme edges of the Cartoons where they are folded around the stretchers, using a toned Japanese Kozo paper and wheat starch paste. These areas had been damaged by stress from the stretchers and by rubbing against the inside of the frames (Fig 5).

At the time of writing there are still three more Cartoons to be examined. Hence it would be unwise to draw firm conclusions at this stage. However the results obtained from the first four Cartoons seem to indicate that Raphael and his assistants made the support for each Cartoon from a single layer of overlapping sheets of paper.

At a later time - probably in the 17th century - the Cartoons, already cut into strips and damaged from usage and travel, were restored by strip-lining each strip of Cartoon. At the end of the 17th century these strips of Cartoon were reintegrated by lining them onto a continuous layer of canvas. Either at the time of the strip-lining, before, or perhaps at the time of the reintegration of the strips, numerous paper patches were used to reinforce the damaged areas of the Cartoons.

The rigours of time and the constant moving around of the Cartoons over the centuries - usually facilitated by their rolling and unrolling and, on occasion, being folded in half (see Footnote) - has led to damage and loss to some areas of the paint layer. There has also been some fading, particularly of lake pigments, but generally Raphael used relatively stable inorganic pigments that have resisted change and look much as they did in his day.

A fuller version of this paper will be presented at the ICOM Triennial meeting at Edinburgh in September of this year.

The Stretchers on which the Cartoons are tacked were built to allow the Cartoons to be folded in half for transportation.