The Restoration of the East Staircase Ceiling and the Leighton Corridor, Victoria & Albert Museum

In February of this year, the Victoria & Albert Museum unveiled an exhibition commemorating the centenary of the death of the high-Victorian painter Lord Frederic Leighton. A number of exciting projects were initiated to fulfil this commitment including the conservation of the original Leighton cartoons, the cleaning of the two frescoes: Industrial Arts as Applied to War and Industrial Arts as Applied to Peace, the restoration of the East Staircase and the Leighton Corridor. The splendid results of this work can be seen in Galleries 102, 107 and 109.

The East Staircase (Gallery 107), as well as serving as a textile gallery, is an important circulation point within the V&A, connecting the ground and first floor at the entrance to the South Court. A landing at the top of the staircase terminates the ascent into the Museum and positions the visitor immediately in front of the entrance to the Leighton Corridor (Gallery 109) with the Leighton fresco Peace to the left. A short journey through the Textiles Gallery (Gallery 101) and the viewer arrives at the Costume Jewellery Gallery (Gallery 102) and the War fresco.

It is generally accepted that unsympathetic alterations to the Museum undertaken in the past, combined with a lack of regular maintenance, had resulted in an unacceptable viewing environment within the galleries. The refurbishment and redecoration of the East Staircase and the Leighton Corridor to their original appearance was considered an essential requirement for displaying Leighton's work to its best advantage. The Conservation Department's Science Group undertook the necessary historical research and paint analysis to discover the original colour scheme, gilding and the stencilled decoration which lay hidden beneath layers of modern paint.

The East Staircase was originally designed by Captain Francis Fowke prior to 1864 as part of the extension of the South Court to provide access to what was at that time the enlarged Oriental Courts and National Competition Gallery, as well as the new Secretarial Wing to the south. We know from documentary evidence that the intricate plasterwork ceiling was designed by Godfrey Sykes and the decoration was executed by the firm of Thomas Kershaw and Sons.

Before the restoration the ceiling was predominately painted a brilliant white. Against this plain background, a limited number of decorative elements were highlighted in an imitation gold colour using modern bronze paints. The architect in charge of the project was interested to know whether the harsh modern rendering of gold decoration was indicative of an earlier more elaborate scheme. Her curiosity led to some interesting discoveries.

The historical research was helped, to a large extent, by the vast collection of records still held by the museum. As a result of the search for contemporary documentation, an exciting find was made in the form of Kershaw's original estimate for the decoration of the ceiling. Dated 15 January 1866, it outlined the decorator's intention to gild the mouldings and the central decoration for the sum of £126. A note on the back of this estimate states that the invoice was ordered on 30 January 1866. This was the first clue that a more intricate gilding scheme had existed in the nineteenth century. The Science & Art Department's report for the year 1866 notes that the construction of the East Staircase was completed by this date except for the decoration of the walls. This minute, along with the note on the original estimate, would indicate that the ceiling was decorated in this year.

Investigations commenced on site shortly after the historical research had taken place. As part of the initial examination, drawings of the ceiling were done and these illustrations were used to plot the location of the 58 samples which were retrieved from a variety of plaster mouldings. These samples were then removed to the laboratory where they were mounted in polyester resin and cross-sections prepared. They were then examined microscopically and subjected to staining and microchemical tests to identify the pigments, materials and media used. Although nine schemes were identified in total, the original decoration was found to comprise of a white lead-based paint layer and a complex and wide ranging scheme of gilding. Interestingly, subsequent schemes saw a gradual recession of the amount of gold leaf used on the decorative elements of the ceiling, eventually culminating in its abandonment in favour of gold coloured paint which was used on a limited number of mouldings. Further practical work involved marking out on site, with the project manager, the individual mouldings which had been gilded and offering technical advice on materials to be used.

After the successes of the East Staircase ceiling, the Leighton Corridor (Gallery 109) was the next room to be examined. The South Court was originally built with two semicircular lunettes measuring eighteen feet in radius at the north end. In 1869 when the Court was extended to the south to create Gallery 109, similar recesses were constructed. Although the intention at this time was to decorate all four lunettes, this was only achieved on two, the northeast and south-east walls, where Lord Leighton painted the frescoes Industrial Arts as Applied to War and Industrial Arts as Applied to Peace respectively. War was completed in 1880 when James Ward was recorded as having painted an enclosing frame brown with a gold coloured moulding executed in bronze metal paint. Peace was finished in August 1886. The frescoes were originally intended to be viewed from the ground floor of the South Court but unfortunately alterations undertaken in 1950 resulted in both frescoes being contained within darkly lit passageways.

The decorative appearance of these lunettes was enhanced by paintings set into the arched soffits above. The inset paintings found in Gallery 102 were decorated by Godfrey Sykes before his death in 1866. It is assumed that the surrounding stencilled paint work and gilding currently visible were also carried out at this time. Similar inset paintings were partially executed, a few years later, on the soffits of Gallery 109 under the direction of Frank Moody. However, a dispute over payment in 1880 meant that four panels on this soffit remained uncompleted. They were subsequently finished by W.E.F. Britten.

At the beginning of the examination, it was unknown whether the inset paintings in Gallery 109 had received the same stencilled and gilded embellishment as Gallery 102 since the soffit and adjacent walls had at some point been overpainted with a dull brown paint. Determining this became the brief for the investigations. In order for the restoration of the Leighton Corridor to proceed it was also necessary to determine the original colour of the paint work on the surrounding walls.

Once again historical research into the development and decoration of the Leighton Corridor was assisted by the discovery of the original specification dated 5 December 1870. It outlined the decorating work required for the completion of the South Court extension and gave a positive indication that the search for a matching decorative treatment would be successful. 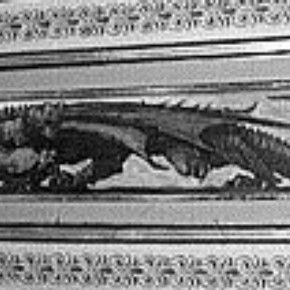 A similar investigative approach to that described for the East Staircase ceiling was undertaken in the Leighton Corridor. After an initial period of documentary research, work commenced on site. The 20 samples retrieved were examined microscopically and staining and microchemical tests were undertaken. Analysis confirmed that the original decoration on the soffits consisted of an intricate scheme of stencilled and gilded decoration, indicated by the specification of, and the decoration in, the adjoining gallery. The plain walls were found to have been painted in two contrasting shades of brown. Further on-site investigations included scraping back later paint layers to confirm the existence and pattern of stencilled decoration and the original paint colours. Although the stencilled treatment differed in some respects to that in Gallery 102, there were a number of striking similarities.

Samples of the original colours were then placed under an ultra-violet lamp to reverse the yellowing which had occurred over time and then colour matched. Continual site visits to monitor work on site and advise on the decoration of non-original surfaces assisted in ensuring the successful completion of this project.

As indicated earlier, further work was undertaken to the Leighton Corridor as part of the preparations for the Leighton Centenary Exhibition. While the fresco itself was cleaned by students of the Courtauld Institute of Art's Wall Painting Course, members of the Museum's Conservation Department were involved in both the conservation and hanging of the original Leighton Cartoons for the fresco within the corridor as well as the cleaning of the inset soffit paintings. Most importantly, additional lighting was incorporated into the gallery to ensure that the fresco and cartoons could be seen more clearly.

The redecoration of these galleries to their original appearance not only makes more sense of the fresco and its setting but it also increases the viewing pleasure of the public and allows for a more coherent link to other galleries through the use of decorative motifs and colour. The re-gilding of the East Staircase ceiling restored this space to the architectural importance it previously held within the building and now heralds the visitor's arrival at Leighton's important work and the galleries beyond.

This project underlines the benefits which can result from a thorough investigation of the decorative surfaces of architectural interiors. In this instance it not only forged a greater understanding of the development of the Leighton Corridor and the East Staircase but it also assisted in reproducing a historic interior of architectural and visual importance.